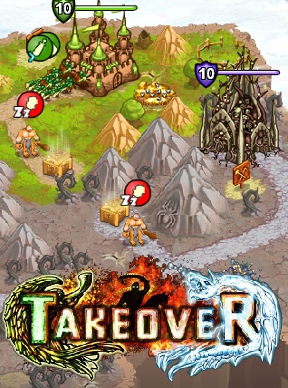 If you want large-scale real-time strategy, you've got to think little. At least, that's according to IriySoft, who brings us fantasy conquest with itty-bitty soldiers in Takeover. You'll command a legion of warriors as they fight back enemies across maps with limited resources and other dangers, balancing your own defenses with making a bid to destroy or conquer enemy territory. As your structures generate gold, you use that to hire various units that can then be directed around the battlefield with a click and a drag. Of course, the amount of units you can hire depends on everything from how much farmland you have to support it, and the structures under your command. Your soldiers will automatically attack any enemies they encounter, and you can help them out by dropping "banners" into their vicinity that give a variety of helpful effects... provided you have the mana to spend. Destroy and reclaim all enemy territory on the map to win the level, then spend any edicts you earn on upgrades like bonuses or new unit types.

With only a handful of upgrades you can reset at a click and simplified unit building that comes down to supply points and gold, the main word that comes to mind with Takeover is streamlined. Also, pretty. Very, very pretty. The game's vibrant style makes up for its squint-worthy visuals, and it would be easy to pick up and play even without the tutorial. It showcases that strategy games can provide a satisfying bit of depth and challenge while still remaining accessible to the casual crowd, and the unlockable campaigns add some replayability too. The only real downsides are the tiny visuals makes keeping track of individual units a pain when there are big battles going on, and real strategy fanatics might find the whole thing a bit too simplified to really sink their teeth into. It also winds up feeling a bit too much like Kingdom Rush, but not as immediately charming or addictive. Ultimately, however, Takeover's winning style and easy to grasp gameplay makes for an effortlessly playable strategy title this just the ticket for making the time fly by before you realise it.

Great production values and visuals, but too slow paced for me, even with speed up, it takes forever to do something, and controlling units is awkward.

I love this type of game with the little people, even though I dislike fighting games - I don't have to do any of the actual fighting.
I prefer the buildy ones where the accent is on the construction, but they all get too fast for me and I give up after a few levels.
This is one of my favourites because the pace is slow enough for me to last out a bit longer than usual.
I suppose it's a good game for newcomers to the genre, or calmer people like me, who play games to relax!
Give that adrenalin a rest =D

For an interface that's supposed to be easier, the selection area is a nightmare! I would love being able to box up several units at once if the active area of a unit weren't so tiny. If I want to send a unit somewhere, it often draws that box. If I want a unit to retreat back to its fortress, the fortress (a whole huge chunk of stronghold!) has such a small selection area that the unit has already auto-engaged and can't be called back. I have archers randomly stopping to pick their nose after I send them to a gold chest. I keep trying to get units out of rebuilding strongholds -- to attack the main objectives -- only to find I didn't select them fully, or they auto-attacked the place and just want to bed down.

This is a fantastic game (and would be so cool on 2-player), but if you're going to build around massive multi-unit skirmishes *and* functional realtime, those little bugs need to be play-tested out. Especially in a memory-hog like this one.

This could be so innovate and cool. Instead it feels a few stages from finished. Art comes highly recommended. If only I could click on it.

Everyone else nailed it. The overall pace for me is too slow. Don't read that as "it takes too long", because some of the greatest RTS games have levels that will last an hour to complete. Rather, the time it takes to move a unit, and the slow pace at which they march and fight, and the time it takes to capture a city. You can have 3 battles and a city siege take 15 minutes.

And Shudog nailed it. I don't know if its a browser issue (sometimes I have the worst time with flash games lagging, doesn't matter which browser I use. Full disclosure; my computer is old, only dual core processor and mid-line graphics card for the time), but trying to grab multiple units was a nightmare.

This is a very sweet looking little game but suffers from a fatal lack of balance. There's no ebb and flow: if you get ahead early on you'll generally triumph, but once you're on the back foot you're pretty much done for.

This lack of sophistication means that--as with a lot of games--the player is faced with a lot of strategic options and choices relating to upgrades and troop options and spells that don't actually mean very much in practice. Ultimately it boils down to getting there fastest with the mostest and zapping away with whatever you have to hand.

Compare this to Kingdom Rush, where the outcome can hang in the balance until the final seconds, and where defeat can provoke a complete rethink of your in-game strategy and a rebuild of the upgrade tree from the ground up.

3,211 Views
1 Comment
chrpa— Jayisgames needs your help to continue providing quality content. Click for details Welcome to the Roundup 35 with three games! As mentioned in the previous roundups, only odd-numbered episodes are featured since even-numbered are for Robin Vencel's patrons. More...  ...

4,453 Views
12 Comments
chrpa— Jayisgames needs your help to continue providing quality content. Click for details Welcome to Weekday Puzzle! The first game by skerys is exclusively about shooting - finding the right angle is the key. Then follows a physics game by...  ...