Looking for a career change with physics, puzzles, and the constant threat of beheading as you caper beneath the unreasonable demands of unstable clients? Put in your application for master builder with Beep Games' The Big Big Castle! In this silly, vibrant little iOS title, it's your job to build towering, precarious structures from a hodge-podge of blocks, beams, toppers and more, all to satisfy the unreasonable demands of the people paying you. At least, theoretically paying you, since they seem more interested in keeping you busy and distracted than cutting you a check. But when the work is this fun, who cares? Though familiar in concept, The Big Big Castle! is big, big fun, and frequently very funny to boot. It's almost enough to make you not mind being constantly belittled and threatened by your eccentric employers. Hooray! 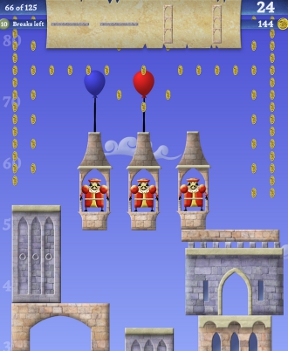 Play is simple. Just drag pieces from the box at the top of the screen and stack them however you like on the playing field below. You can make adjustments by dragging pieces around even after they're placed if it looks like your structure is weaving a bit too much for your taste. To nab the mysteriously floating gold coins, just stack material over top of them to add them to your score. Sometimes you'll encounter pieces or people held aloft by balloons, which you can tap to drop to your structure, but if they fall too far it might be fatal.

Each stage will have different requirements for you to meet, usually revolving around reaching a certain height or safely housing the understandably nervous balloon-buoyed folks within it, and the more you play the trickier things become as your client's demands get more and more elaborate. Although only the initial kingly set of levels is unlocked, you can get more by spending coins, which can themselves also be nabbed via in-app purchases if you're sick of slowly saving up and want to splurge on more material in the store.

The optional "Destroy!" mode, which lets you blow up constructions of your own or other players, can be entertaining, but feels token and sort of pointless. Earning coins is also so slow that if you're trying to save up the huge amount required to unlock other level packs you're going to need to replay stages over and over unless you feel like spending some money... almost to the point where you might prefer if the game had charged you a flat fee and not bothered with the coins at all. However, The Big Big Castle! is the best kind of casual, mobile game possible. It's funny, it's vibrant, easy to get into, and hard to put down. Though the gameplay really isn't anything physics puzzle fans won't have seen before, the presentation, humour, and quick levels makes it the sort of thing you can find yourself reaching for whenever you have a few spare moments. It's polished and accessible in ways that diehard phuzzle fans and newcomers alike will appreciate, and is more than worth the space on your device.

NOTE: This game was played and reviewed on an iPad (1st gen). Game was available in the North American market at the time of publication, but may not be available in other territories. Please see individual app market pages for purchasing info.

Ron Gilbert is one of the creators of this: