You can't really talk about indie point-and-click adventure games without talking about Wadjet Eye Games because, well, nobody does it better. They've made or helped make some of the best adventure games in the last decade, but few have been spinning their story as long as The Blackwell series. Most recently starring Rosangela Blackwell, a socially awkward but determined medium guide, and Joey Mallone, her laconic spirit guide, the series has been telling an increasingly more complex tale since 2009's The Blackwell Convergence and 2011's The Blackwell Deception. Three years later, Rosa and Joey's story finally comes to an end with The Blackwell Epiphany. Rosa's been working her usual jobs for a while now, finding and helping troubled spirits pass over, but one routine assignment takes a horrifying turn when she and Joey witness a murder... and something they've never seen before. Throughout the game, which otherwise controls like your typical point-and-click adventure, you'll need to make use of both Joey and Rosa, both of whom have their uses and limitations. This time, however, you'll also take a leap into the past and control two other characters on a path that reveals a lot more about someone you thought you knew. 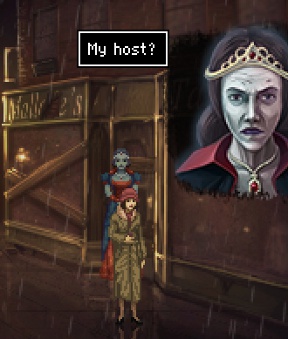 The puzzles tend to be logical and even intuitive, but solving many of them winds up requiring a lot of tedious backtracking and character swapping. At the same time, however, they manage to be a lot more satisfying to solve than your average adventure game simply because you wind up having to play detective more often than not. Combining clues, hunting down information on your phone, using your notes, all of it feels natural. That detective work and logical thinking means "adventure game logic" is all but completely absent, but the lack of many direct hints as to how to solve any particular obstacle means you'll really need to make a lot of the connections yourself. It's intelligent gameplay, and it makes you feel intelligent as well, which is a rare feat for a point-and-click adventure. Admittedly, you'll still run into situations where the little verbal clues between Joey and Rosa when you're stuck aren't much help, and there was at least once instance where I was expected to use Joey's ghostly abilities in a way that didn't feel realistic, at least according to the rules of the established universe. 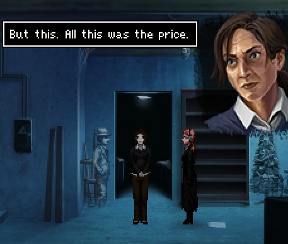 Wadjet Eye has pulled out all the stops for this one, and The Blackwell Epiphany is easily the most gorgeous and complex game to grace the series. Rosa leaves footprints in the snow, and rats scurry away from her in abandoned areas. Silhouettes pass behind lighted windows in the scenery. Each area feels like it has so much to just drink in and explore, and Joey and Rosa have plenty to say as you do so, making their relationship feel even more dynamic and, uh, alive than before. Balancing the exposition people have been clamoring for with the rest of the plot can't have been easy, yet it's been pulled off here remarkably well. There's a tremendous amount of payoff for fans, and one thing that's a little bittersweet is seeing the way Rosa has changed over the course of the series. She's more confident, more assertive, but it also seems to have made her just a bit more cynical, a little harder around the edges. It mirrors the tone of the story itself, which is altogether more serious, more solemn this time around. That's not to say it's never funny, and it definitely has its moments of humour and warmth, but The Blackwell Epiphany has some seriously heavy moments.

Compared to the other entries in the series, The Blackwell Epiphany is one meaty game, with a lot of different locations to travel to, and more twists than ever before. Whenever a series you've been following for so long comes to an end, you always start to get a little nervous. You worry that all your time won't be rewarded, or that things won't play out the way you want them to. With The Blackwell Epiphany, however, the only disappointments you'll have will be when it's time to say goodbye. This is a series that has managed to create two people with such a tremendous amount of depth and character they remain truly memorable after the credits roll, and here they, and their long story, get the finale they deserve.

I noted multiple times in the review that this was the finale. :)

I played this game the day after it came out, and loved every minute playing it. The voice acting, the art, the music - they all come together to give the game that extra dimension of emotion and purpose. Added the very ... emotional ending, and I can honestly say that this is the best of the Blackwell series.

Finished this today and absolutely loved it! Definitely the best in the series, but the whole series is amazing to be honest. Standout points are the characters and voice acting. But I really like the puzzles as they are intuitive and have a good level of difficulty. So sad to say goodbye to some of these characters!

I've been a fan of the series since I purchased the Blackwell Bundle from GOG.com, and I had been anxiously awaiting Blackwell Epiphany ever since I completed all four preceding games. It's one of those few indie game series that gets genuinely better with every subsequent entry, and this game is no exception. It hits all of the right chords when it comes to delivering a compelling story within a point-and-click adventure game narrative. If a grand finale makes you feel both satisfied and sorry to say goodbye to a series you've held onto since the beginning (or maybe even the halfway point), you know the creators have done something amazing. Wadjet Eye Games has come a long way, and one can only wonder what other great feats of narrative point-and-click adventures they'll bring in the near future.