After a space anomaly you, Captain Welmu for the Spacefleet, end up on the far side of the galaxy all alone with only your A.I unit to keep you company. On your way to returning home you run into a weak signal for help coming from a planet called Hox. Decided to appease your curiosity you go down to see if you can help, only, of course, to end up getting into your own predicament. Can you find a way to get off the planet or find who needs your help or maybe find a way to kill two birds with one stone? The Captain is just a small demo of the much larger planned game by SysiacGames. But if the game is anything like this demo, we'll all be anxiously awaiting the final product. This point-and-click adventure game feels like a teaser for something big and great by being something small, but great. With three different endings and an intro to the kind of gameplay and characters we can expect to see in the future project it still feels like a game on its own. 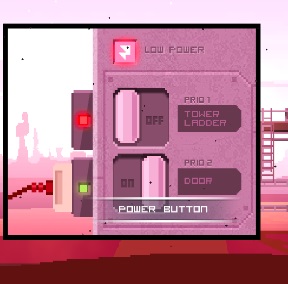 With a pretty nice tutorial built in to explain how to play, it's not hard to get right into playing. Click on items that have a circle appear, and then choose from the icons easily deciphered, even without the tutorial, as Look, Talk, Pick up, or Use. Items go into your inventory, which you must click to open, and then drag out the item to use on what you intend to use it on. You also have dialog choices, and be careful what you pick because it can change which ending you receive. Each ending is different enough that you want to go ahead and see what all things bring. While there isn't a way to save and reload, once you know how to get through the game you can easily get back to where you want to be faster than you assume. Each ending tells how it will affect the next part of the series, and it's interesting to see how this mechanic will work in the final product. The other thing it shows is the personality of this mysterious Captain you are to be playing, as well as the odd, dark humor this game has. More importantly it shows how a wrong choice, even if done in innocence, can drastically alter the ending. The Captain demo definitely does its job at getting your interest for the final game, but it also is strong enough to hold its own and be memorable even if something happens and, heaven forbid, doesn't ever become a full game. Even if you're not the biggest fan of point-and-clicks The Captain is one for all who enjoy a good mini story.

Takes a long time to load.

The windows link appears to no longer be valid.