The Cave of Heroes

QuestTracers' lovely point-and-click adventure game The Cave of Heroes stars Alexia Crow, a young girl who accidentally tumbles into an ancient cave full of secrets. Before she can escape, she'll need to solve puzzles, uncover secrets... oh, and receive the sort of legendary training that heroes of myth and legend did before her, whether she wants to or not. No biggie. Just click around to interact and explore, and drag items from your inventory to where you want to use them onscreen. 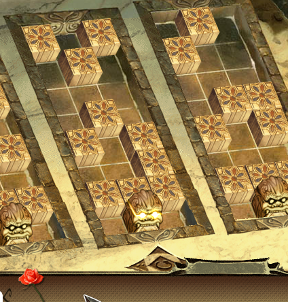 The Cave of Heroes can feel like it's struggling at times to find a balance between the entertaining thinky puzzles and simple environmental item combinations, but for the most part the game's use of clues and objects works well with the contained puzzles. It's sort of like what you'd expect to find in a Tomb Raider game, minus all the clambering around and shooting things, and the ancient ruins are beautiful to explore. Whether the bowed visuals work is another matter entirely, since the overall design is gorgeous, but the movement combined with the subtly warping scenery can actually be a bit nauseating. The decision not to have a changing cursor to mark objects you can pick up is a bit odd, especially since the cursor shifts to show area transitions, but by and large items you can use tend to stand out against the scenery enough that you'll know them when you see them.

The story winds up taking a backseat to, well, nearly everything, which is sort of unfortunate since those static cutscenes are so beautifully drawn. It's the sort of game that will provide just enough of a challenge to make it a satisfying midday treat, without leaving you going in circles and wondering what to do next. Though it may feel a little rough around the edges, The Cave of Heroes is still a lovely, relaxing little gem of a game you'll want to see more of. Even though we Potterheads have essentially ruined any actual credibility the real Nicholas Flamel might have had. Worth it!

The Cave of Heroes

The Cave of Heroes Walkthrough

Finished with no walkthrough! That may be a first for me. I liked the puzzles - some seemed quite original.

Excellent, interesting puzzles. Great artwork. Cutscenes are a bit slow-paced, and words stay on the screen way too long, but overall, great!

OK Here's a tip I could have used :S

To turn one of your keys gold you don't have to use a pot or anything, just combine items.

The Cave of Heroes Walkthrough

@Trinn: Thanks for the walkthrough! The in-game video walkthrough wasn't much help.

running into an issue of a black screen, with only the 'zibbo' and language choice on it... the black screen eats my curser. gonna try a few things.

@ashiel: Running into the same problem. Refreshing the page, updating chrome (and therefore automatically flash)has not helped. If you find a solution please share :-)!

In the second room, the puzzle shown in the review with the three demon heads and the push blocks, what the heck is the objective?

(I'm not having a good experience with the embedded video walkthrough. I can't do anything except invoke it and dismiss it. None of the other interactive bits are functional, which means I can't pause it or view it in YouTube proper, which means that every time I hit a bump, I have to re-watch the video from the beginning.)

Hi Ashiel and Marjolijn! Sorry to hear you're having issues. Have you made sure any AdBlock programs are turned off? In addition to hurting the site, they also tend to interfere with games loading and cause other odd behaviour with them. Otherwise, try clearing your cache in case it got corrupted.

Hi ray9na! The objective is

to move the lion heads in each rectangle to the arrow at the top of the box they're in. Clicking on an adjacent square will move the lit-up lion head into it, and if there's nothing on the other side of a block, you can push blocks out of the way by moving into them. If you get stuck, the circular arrow button resets you.

Looks promising ... I'll have to comeback when I have more time. A lot of watching long scenes play out.

Could someone please post the audio solution? This machine has no sound.

Sorry the screenshots in the walkthrough aren't uploaded yet! It should be just a few more minutes, hopefully. I also added some additional instructions to the walkthrough to clarify the solution. If you were to picture the strings on the lyre labeled A, B, C, and D from left to right. You'd need to hit them in this order:
A, C, D, B, A

Thanks a ton, Trinn! (Their video walkthrough is indeed turrible, ought to have broken it into two vids.)

Well, besides the game desperately needing a Steadicam and not having every single new item turn into a three hour tour, this is a neat game. As a closet Classicist, tickled by the references sprinkled throughout. The randomness comes off as more esoteric than historical, though.

The art is really stunning. (Except for this one room with the 8-bit PC game throwback. That was odd.) It's too bad the nutty inventory interferes with what would otherwise be a SOP for a point-and-click, namely all the stuff that is nearly out of the screen. Pop the motion sickness pills and enjoy.

I think the rhombus puzzle is broken... There doesn't seem to be a solution that I can see below nine moves

There are actually a couple possible solutions to that puzzle. Try this one:

Let me know if you need any additional help! :)

Ugh, the camera flew around like crazy on me... I could barely select anything.

I'm getting nothing but a white area where the game should be, everything else on the page loaded.

This hero is quite the hottie! :)

I remember learning that

Chiron was supposed to be a handsome, beloved, immortal. Then the game zoomed in on his spooky-lookin' face and I learned that this was not that Chiron.

Won't run for me in Chrome. I get to the title screen with the "Start Game" button and "Language Selector" with no languages to select and no mouse cursor for the game. I can get "Start Game" to light up as if I'm over it with a cursor, but clicking doesn't start the game.

Chrome is up to date, I'm not running an ad blocker on this machine, and clearing the cache did nothing.

And for what it's worth, the exact same thing happens with the game over at Kongregate.

Incidentally, is this serving as the Weekday Escape entry or has that feature been discontinued?

Ugh. Given the really bad camera control, that tangram puzzle is *awful*.

Great puzzles. Great art. Never got stuck for too long. Only major complaint is that the text... was... so... slow... It would benefit from an option to speed up certain sequences (like when you find a new item).

I had to give up too due to controls and camera. I didn't understand the point of the weird camera if it added nothing to gameplay?
Shame, obviously a huge amount of effort went into this.

I gave it 4 out 5 mushrooms because of the lack of a changing cursor.

I was stumped on two puzzles. One I would probably never have solved without the walkthrough, but the other I definitely would have solved if I had an inkling that I could interact with something.

Otherwise, very fun and I'm looking forward to the next one.

What do you break the statue with?

I found the amount of transition time was annoyingly long. Whenever a new object was discovered, my gameplay would be interrupted with the object being shown on the screen. The way things are placed on the screen is also frustrating.

A problem I had with the game was the automatic cutscene skip. One click and you immediately go to the next area. Granted, there's only one (where Chiron appears) mid-game but because I unintentionally skipped it, I had to do the first two puzzles again.

Even with that minor annoyance, I finished it and was well satisfied by everything else.

While I usually like audio puzzles, I had to input the solution multiple times before it would take. Not to mention, if sound is going to be an integral part of a game, then it would be nice if the soundtrack wasn't incessant industrial buzzing or droning insects. There were seriously times I almost quit the game because the sound was grating and didn't seem to contribute to the immediate puzzle~ I initially thought there was a way to turn it off until I realized that the industrial buzzing would occur even while navigating through rooms. Don't know if maybe this was a glitch, or....

What infuriated me was

the stone slab puzzle in the Underwater Room: when x^n and n=0, x=1. So in all the exponent problems (x^n +1), regardless of the value of x, 2 was always a correct answer and, yet, was never accepted!! Infuriating!

Unless, of course, I'm wrong (I am awfully tired). Correct me if I am, please! :) Otherwise, infuriating! :D

From a technical perspective, I'm impressed that QuestTracers managed to get camera motion that, um, fluid in a Flash game. From an aesthetic perspective: what were they thinking? All it did IMO was distract from the gameplay and the art, which were otherwise quite nice. This would almost certainly be unplayable for a friend of mine who's especially susceptible to motion sickness.

Good puzzles, though, and a promising first stab at point-and-click from the developer. They could be a serious player, especially if they rethink their game engine a bit.