The Dark Hills of Cherai:
The Regal Scepter 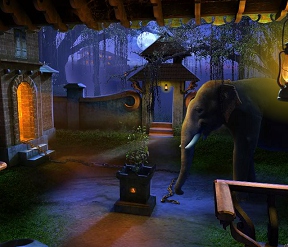 The Dark Hills of Cherai: The Regal Scepter features three of the four cousins from the original game, Tara, Maya, and Rahul (of the fourth cousin, Arjun, there is mysteriously no mention). Poor Tara has been suffering night after night from the same nightmare. As she awakens from another occurrence the children are visited by the ghost of the King of Cherai, who aided them on their original journey. According to the King a great evil has awakened in the form of an evil magician named Vishwarood. Many years ago the treacherous Vishwarood, the court magician, betrayed and murdered the king in order to obtain a powerful magical object, The Regal Scepter. Fortunately the scheme was thwarted by a few of the King's loyal guards who fled with the scepter, breaking it up and scattering the power gems across Cherai in a bid to keep Vishwarood from ever finding it. While attempting to seize power Vishwarood was turned to stone and peace settled across the kingdom once more.

Now, in modern times, another attempt is being made to find the Scepter by Vishwarood, aided by his son and a Yakshi (think Indian version of a succubus). It is up to the children, descendants of the old King, to discover the map fragments left behind by the loyal guards as well as the scepter itself and the scattered gems. They also, incidentally, must fight and defeat Vishwarood, his son, the Yakshi, and a pretty nasty fire cobra in order to keep Vishwarood's dreams of freedom and world conquest at bay. As you do. 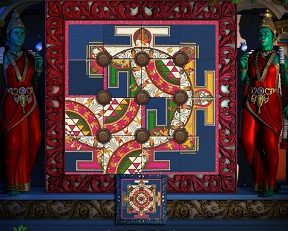 The Dark Hills of Cherai: The Regal Scepter is a classic adventure/hidden object hybrid with a twist: playing from multiple viewpoints. As in the first game each child sets out on their own in a different direction, starting with Tara. Eventually all three children will have set out on their quest and the gameplay switches from one point of view to another. The children cannot see each other, but can swap objects of interest on a charmed merry-go-round at a mysterious meeting place which is handy as many of the items they find are only useful to the other children. It is this multi-layered gameplay that made the original Dark Hills of Cherai so popular and which is such a nice change to the usual more linear style of play common in most hybrids.

Present in the game are the usual controls found in most hybrids. There's a changing cursor to indicate navigable areas and places of interest, a notebook to keep track of clues and important information, an inventory of interesting items for each child, and a refilling hint timer to help the player along. What is not usual but pretty nifty are the other features, such as a magic mirror to speak to the King's ghost which doles out hints about the quest, a map feature that not only shows the layout of the quest but also indicates areas where things still need to be accomplished (and where hidden objects scenes have reactivated) that can also be used to transport the player from one location to another immediately, as well as a feature that allows each character to "leap" directly to the meeting place to exchange items between the three main characters. The King also pops up unannounced to aid with guidance, advice, and to occasionally scare off the Yakshi who frequently shows up to block the players' progress. Small sparks of light indicate areas of interest (these do not show up in the advanced mode of play) and cascades of sparkles indicate hidden object scenes. 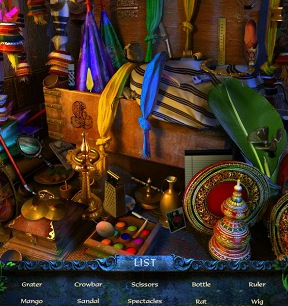 Analysis: The Dark Hills of Cherai: The Regal Scepter is an amazing and unique hybrid with lush, tropical scenery and layered gameplay which makes it stand head and shoulders above the adventure/hidden object crowd. The challenge of keeping track of three characters, their inventories, and their separate quests adds a dimension rarely seen in today's casual gameplay. Once again it's gratifying to see an exotic location done so realistically the player could almost be there. Although the game takes place at night it doesn't detract from the gorgeous backgrounds and design which incorporate the tropical location, the stunning iconography of the region, and of course the wildlife. The amazing accuracy of the design is, of course, due to the fact that ChaYoWo games is actually a company based in India and thus knows the territory.

What makes the gameplay so fun, aside from the switching points of view and the amazing backgrounds is the fact that The Regal Scepter is, like its predecessor, absolutely packed with puzzles. Although the puzzles are not so original, there is a plethora of them to be found within the game, each beautifully done up with Hindu iconography and its lovely, dense designs and fabulous colors. The hidden object scenes are not interactive, but executed with more of a "hide the item in plain sight" vibe rather than the usual "junk pile" mode most games use. Due to the complexity of the play and the mass of puzzles The Dark Hills of Cherai: The Regal Scepter offers some pretty meaty gameplay of a length not often seen these days.

The unique point of view gameplay has one downside, however, and that is that it can be confusing to some players, especially in the last stages of the game where the inventories of each child becomes almost unwieldy and the gamer may have a bit of trouble remembering who needs what for which scene. There is also the usual problem of many clickable areas being too near navigation areas as well as too near the bottom inventory which can cause minor problems in some scenes. And once again the King can be a little too helpful, even when not called upon to give a hint or a clue.

The two modes of play, casual and advanced, along with making the King's advice (for the most part) voluntary makes The Dark Hills of Cherai a delight for a wide range of gamers, from the newbie to the advanced. For those who enjoy traveling to exotic locales, exciting gameplay, and loads and loads of puzzles, this is the game for you!

After playing it, I kind of feel that they could have simply done it the traditional way (one POV), and not really missed out much.

I did love the map option, practically eliminated backtracking; really, really important because there are a LOT of areas, and because you're constantly heading to the central area where you swap items, easy access to any area you've been to before really helps.