The Dark Hills of Cherai

Traveling to exotic locales is all well and good, but, well, frankly it can be expensive, annoying, and these days, downright dangerous. One thing adventure/hidden object hybrids do very well is transport the player to far off places, some that they'd probably never get to see in real life. The Dark Hills of Cherai is no exception. Created by ChaYoWo Games, The Dark Hills of Cherai take the player to the mysterious jungles of southern India in search of a cursed treasure. 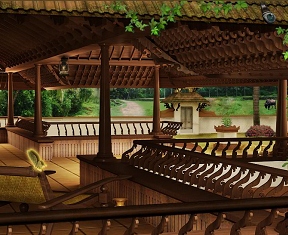 Our tale begins as four young cousins visit their grandmother in the village of Cherai. She delights them with stories of a local treasure-hunter, Wyatt, who recently found something but succumbed to the accompanying curse. The children thrill to the story of the former King of Cherai and his treacherous court magician. The children go to sleep, visions of treasure, dark sorcery, and murder ringing in their heads. While it is still dark, the oldest, Tara, awakes to find young Arjun missing. Knowing that he has probably gone to find the treasure, she sets off on a quest to track him down before trouble can find him. Too bad that it's too late.

Yes, this sounds like the opening of a thousand other adventure/HOG hybrids. However, once Tara reaches the snake temple and can go no further The Dark Hills of Cherai hits with a rarely used game dynamic: multiple playable characters. As Tara contemplates what to do, another cousin, Rahul, wakes up to find them missing, and sets off on his own quest to find the missing relatives. Eventually, the last cousin at home will also set off (with Grandma in tow) in yet a third direction. Each child will find pieces of the puzzle, but it is only when they combine their efforts that they will manage to find the missing treasure, cousin Arjun, and the evil magician who has kidnapped him.

Gameplay is simple and is accomplished with the click of a mouse. The cursor will change to arrows and text indicating a location or simply "path ahead" to let the player know which way they can go. As the player enters the scene a list of hidden objects will appear that need to be found before you can continue. Some objects will go into the inventory for use either within that area or later in the game. Showers of sparks denote areas that require some action or which involve mini-games. And there are a lot of mini-games to be had. Gamers can clear the scene and receive a "magic herb" or can move along without completion, but you will have to come back eventually to find everything there is to find. There is a hint system for the hidden object scenes, with a timer that refills slowly and a skip button for the puzzles, also with a slow filling timer. You can play in easy, untimed mode for relaxed casual gameplay, or a timed "advanced" mode that can be more difficult. The easy mode includes a friendly ghost who will give you hints and help you along the way. 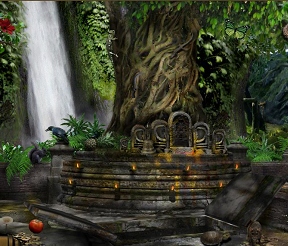 One of the coolest aspects of The Dark Hills of Cherai is the different playable characters. Each child is finding useful objects, not perhaps useful for them but for the other children. This necessitates all the characters finding the "meeting place", a point central to each of their journeys, where they cannot see each other but can swap objects blindly on a rotating merry-go-round. However, each character has to find the meeting place, which can be tricky. Once the characters have the items they need they can go back and proceed along their own journeys. Switching between the children is simple, bars at the top indicate the cousins so just click on the bar and you are ready to go. Play one child for a while or switch rapidly back and forth between them, it is up to you. Eventually everyone will meet up in time to challenge the evil magician and rescue poor Arjun.

Analysis: What sets The Dark Hills of Cherai apart from the multitude of adventure/HOG hybrids? First is the location. Created by ChaYoWo Games, an Indian company, the game authentically recreates the lush landscape of southern India. Little touches everywhere add to the illusion, from the water buffalo grazing in the front yard to the elephant hanging around by the kitchen door, and the multitude of other local fauna scampering across the screen whenever you reach a new location.

The background artwork is magical, so realistic you can see the grain in the wood and the veins in the leaves. Each journey is also appropriately lit: Tara wakes before dawn, so most of her scenes are dark and gloomy; Rahul awakes at daybreak, and you can witness the light of early morning in his quest; Maya and grandma set off when the sun is high in the sky, and their scenes are bright and washed with light. The little animations in each scene add to the feel of really being there, without the actual heat, humidity, and bugs. Rounding out the experience are lovely incidental sounds and music which capture the mood and the place. 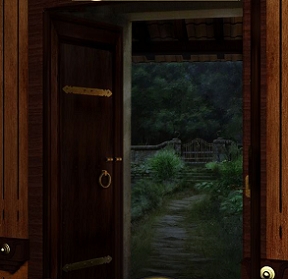 The hidden object scenes are done beautifully. Rather than go for the "pile 300 objects in a small space and make you find the objects", The Dark Hills of Cherai opts for the more subtle placing of objects so carefully that they are swallowed by the stunning backgrounds. Warning, though, you will encounter more than one scene with a lot of wildlife. Hope you can tell a myna from a blue kingfisher, a crow from a lovebird. There are also a few "Britishisms" in the lists, calling a wrench a spanner or glasses spectacles.

The best part about The Dark Hills of Cherai are the mini-games. There's nothing terribly new there, but there are a plethora of games to satisfy the adventurer. Nearly every scene includes at least one puzzle, and there are a lot of scenes in this game. From pipe puzzles to sliders, from tile swaps to jumping peg puzzles, from untangle puzzles to the classic Towers of Saigon, ChaYoWo has thrown everything into this game but the kitchen sink. There's even an avoider maze puzzle late in the game which can be exceedingly tricky.

Some of the objects are, well, a little too well hidden, making them almost impossible to find without hints. Several of the mini-games are color-based puzzles, making them difficult if not impossible for those with color-blindness. And the helpful hint system is sometimes a little too helpful, even in "advanced" mode. The game's habit of letting you know precisely which child needs the item you just found can be annoying to experienced gamers who would like to figure that bit out for themselves. Taking each of the children to the "meeting place" means a lot of backtracking, although once they leave you can use the handy map feature to skip them back to their previous positions.

Minor flaws aside, The Dark Hills of Cherai is beautiful, fun casual gameplay. Fantastically, it bucks the latest trend of the ever shrinking game time and will keep players busy for hours. This is not a game to speed through. Take your time, explore, and experience the wonders of India without ever leaving your home.

The Dark Hills of Cherai Walkthough

Walkthrough by Walzar of JIG

Cherai is an actual place in the South Indian state of Kerala. The art and environments used in the game are pretty accurate representation of traditional houses in Kerala. A must visit place.

"Britishisms?" You mean "Worldisms"! It's only in the US that spanners are called "wrenches" and spectacles "glasses". In India, Africa, the Caribbean and most of the rest of the world we were never Websterised. Fortunately, we know what you mean, and we look fondly on your idiosyncrasies :)

I bought this game a week ago. It's very well done though it does eat up ram. I like the 3-person interaction at the Meeting Place. And I like the fact that you get from Grandmas' house to the Magicians' house in 3 separate stories from 3 different vantage points. The HO elements are a mix between logical placement and pie in the sky. That's fine with me as that pie in the sky seems to be the norm. Some minigames were easy peasy, others were tough as nails, had to skip. Definitely well worth buying.

3 out of 5. Nice plot with the 3-characters interaction, good graphics, no challenge whatsoever. The trade items system is also boring.

I recommend "Value for Money game" !

The Dark Hills of Cherai Walkthough

Walkthrough by Walzar of JIG

It's kinds annoying having to backtrack to the meeting place every once in a while. I'd be nice to have a map that instantly transport you to a place you want.

I am stuck because I didn't get the jewel from the partially hidden idol at the riverside. Played the mini-game but it didn't register that I got the jewel. Can't click on it any more. Can't progress to final meeting without it! Do I have to start over? Hope someone has a fix!