Each night the dreams come. Dreams of fantastical creatures and vistas that could only exist within the realm of the imagination. But when the morning comes and the eyes open, they dissipate like wisps of fog. But tonight's dream is different. It seems that you have been granted a gift: the gift of time. Or at least that's what that white-haired giant popping out of the ground has told you. But if your dreams are a place where anything can happen, that means it's also the place where everything can become undone. This world is a riddle that only you can solve. And you'd better, because there is a rot and the black wind is blowing. The Everloom is an artistic adventure game by Lucas Paakh that takes players on a trip through a forest of imagination.

Move with [WASD] or the [arrow keys], and interact with the environment with [Spacebar]. There are people to talk to and items to discover, which will be added to your inventory in the upper right, then used automatically when needed. Explore the world, help its inhabitants solve their problems, and hope you'll live to see tomorrow's sunrise. 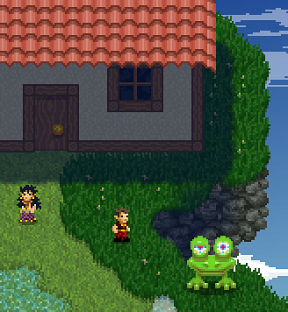 The Everloom is an aesthetically gorgeous game. The 16-bit graphics are beautiful, with some particularly impressive parallax scrolling effects being a highlight: Mode 7 ain't got nothing on this! The prose and dialogue are trippily evocative, with players getting a real sense of the game's fantasy world and characters through relatively little dialogue. The Everloom is a work that let's the scenery do most of the talking, and it does, calling to mind a variety of gaming classics: a little King's Quest here, a little Chrono Trigger there, a sprinkling of MYST... not to mention a few Robert Frost quotes. Paakh has always been a developer who wears his influences on his sleeve, and he definitely knows how to pick the right elements from each.

That said, how well said elements combine is mixed. While the story is charming enough to keep players forever-intrigued, much of the gameplay boils down to listening to a character give a portentous statement, delivering the correct item to them, then getting another portentous statement and another item for your troubles, rinse, repeat. The Everloom sometimes feels like what a Final Fantasy game would be if it were nothing but fetch quests, and it's not clear if that's a compliment. Compounding this problem is the size and scope of the game world, and the CPU intensity required to display it. It's always a little eye-rolling when game's with graphics from 1995 make your modern-day computer run laggy, but in a game where every next step of the plot is several screens away, it can be a bit unbearable. Whatever happened to letting players lower their graphical quality? (Turning off the Hardware Acceleration does help with this problem).

But if The Everloom is occasionally confounding in mechanics and in plotting, it is a fascinating piece of gaming, and compares favorably to the best of Paakh's able canon, indeed. One can only hope Paakh will someday show us more of this dreamworld, because if not, I may have to write some fanfic. And yes, that is a threat.

The way they've done the trees looks so good

"It's always a little eye-rolling when game's with graphics from 1995 make your modern-day computer run laggy"
So its not just me. I have an awesome computer, there is no excuse for a game like this being laggy.

That was really cool. I got a real William and Sly vibe from it! As long as you keep moving, the movement part of it is real easy.

I have ancient XP and current FF, and experienced no lag. I suggest clearing cache, perhaps.

I experience no lag using Chrome. I disabled pepperflash (because it's awful) and I'm using the Flash plugin from the Adobe site. The game played smooth as butter on my 5 year old computer (windows vista, 2.9 Gz dual core)

Fun little game, very nice story. I love the way it unfolded, but the ending was slightly too dialogue heavy. It ended up bogging down what started out as a mystical, ethereal story set in a dreamworld. The ending that was too heavy on explaining the "why" behind everything. I would have preferred a bit more mysterious of a resolution to this chapter - especially if there's more to come.

With that being said, this was a beautiful game, well written, and the graphics and puzzles were nicely designed. Great job!

I'm on Chrome as well and was lagging so much it was nearly unplayable until I read Cave Johnson's comment, figured out what the deal was with pepper flash and disabled it. Now it runs a thousand percent better, and I'm glad I was able to play it. The concept and setting were fascinating and beautiful. My only complaint is the player character is so boring. I just wish game designers would give us a little more variety than another nondescript white male hero, especially when the setting is so rich and fantastic.

To answer the question posed at the end...
No, not the end! This is way too good for it to end. I enjoyed the play through immensely and the controls were smooth and lovely. I did not experience any lag so that way nice. I will await the next installment eagerly.

I don't usually comment just enjoy the game. However I just had to. I have just finished this game on chrome and I found it awesome. Very entertaining and logical. A BIG THANKS.

What a fun game! And that ambient pad/harp music through the whole game is just freaking lovely. Which I could download a copy of it somewhere...

Using Chrome, I had lag so bad that I gave up on playing. On Firefox, there has been no lag. *shrug*

How do I get the

Except for that one pixel-hunt (no reason for it to be in pieces; you'd think the magic eye would have a more important role in the story, but nope) and the lazy exposition toward the end (at least give us some CGs to go along with your text dump; come on!), this was pretty cool. I turned off hardware acceleration as the review suggested, and didn't get any lag until the final sequence (and that might have been floaty controls rather than lag).

zero lag. had a great time. thanks for the fun game.