Choice of Games teams up with Jonathan Valuckas to take you to infinity and beyond in their sci-fi text adventure The Fleet for iOS and Android as well as the Chrome Web Store. As the noble captain Your Name Here, you're forever on guard against a race of aliens that seems to only want to shoot first and ask questions later where your home planet is concerned. As tensions mount and your home ultimately falls under alien rule, your High Council has started talks about forging an alliance with other planets to help combat the alien threat, which you think is totally for suckers. You know... unless you don't. Your choices and actions will determine your future, and maybe even the future of your entire species. Man... that sounds like a lot of pressure. Where's the option to just let Sisko handle everything and cry in a holosuite until it's all over? 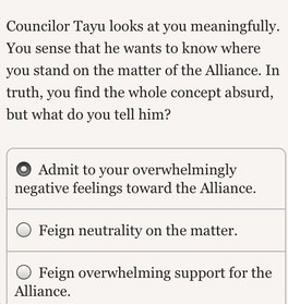 To play, just select the choice that best suits your personal feelings about any given situation. Feel like sassing your beloved mentor? Go right ahead. Want to outsmart your foes rather than outgun them? Adjust your tactics accordingly. Your choices influence your stats, everything from skills to the support you've got from various factions, and will have an impact on the way events play out. Unlike most Choice of Games titles, the emphasis here is less on your own character development and more on the sort of sci-fi political thriller plot. It's not about who you are, so much as it is who you trust, and how you present yourself and handle everything from your available resources to your stance on a potential allegiance.

Though The Fleet is well written, its lack of Choice of Games's so-far signature levels of enormous character customisation and more linear structure means it will appeal more to players looking for a space-faring adventure that has as much to do with intergalactic politics than anything else. Though fans of more free, character-driven gameplay will lament its loss, The Fleet's focus on trying to convey everything from political drama to pitched space battles is actually sort of refreshing, though trying to remember all the consequences your decisions might have had on the latter, as well as keep all the fancy space names straight in your head, can be sort of tricky. If you don't mind the spotlight not being on you for a change and enjoy stories heavy with social and military maneuvering, The Fleet is a sturdy little sci-fi text adventure that will keep you busy for a while. It's smart, well constructed, and an intriguing bit of space-faring drama. And remember, if the you-know-what really starts to hit the fan, you can always blame Worf.

Link seems to point to Eerie Estate Agent, ATM.
How would you say it compares to the other games in the series? I enjoyed Eerie Estate Agent and Heroes Rise less than the previous games: my choices just felt less meaningful, with less of an impact on the story. From your review, I suspect I'd feel similarly about this iteration, but I'd love to be wrong.

All of the Choice of Games these days are written by different people with different story ideas and priorities, which accounts for the feeling of change. As such, The Fleet is much less character driven than the others, and also does feel a bit more linear. I would recommend trying the browser demo, but The Fleet is more about telling a specific sort of story you can take part in and influence rather than a story you create and steer around your character.

The link now points to the correct place, but it still is called "Eerie Estate Agent" ;)

I playtested The Fleet, and liked it. The writing is solid, the choices are interesting, the endings pack a punch. If you absolutely must choose your character's eye color and have romance options, this isn't the story for you. But if you enjoy Battlestar Galactica style political intrigue and space battles, it's pretty much perfect.

It feels superior to Eerie Estate and Heroes Rise (only played demo of Heroes). It's relatively linear, but no more so than Broadsides, and the endings are deeper than just "YOU WON" or "YOU LOSE."

I playtested The Fleet, and liked it. The writing is solid, the choices are interesting, the endings pack a punch. If you absolutely must choose your character's eye color and have romance options, this isn't the story for you. But if you enjoy Battlestar Galactica style political intrigue and space battles, it's pretty much perfect.

It feels superior to Eerie Estate and Heroes Rise (only played demo of Heroes). It's relatively linear, but no more so than Broadsides, and the endings are deeper than just "YOU WON" or "YOU LOSE."

The demo was really quite good!

I just wish that it was a bit longer...

I bought the Android version, and have generally enjoyed it. My only complaint is that you can't "hop backward" to a previous decision. Trying to avoid spoilers, there's a pretty important event that comes after about 15 minutes of going through previous choices as fast as possible. To get a desired outcome at that event, you need to make several sequential choices correctly. If you don't, there's no way to go, say, back a page or two, and try again. Instead, you have to go through the whole story again from scratch. Frustrating.

4,640 Views
10 Comments
chrpa— Jayisgames needs your help to continue providing quality content. Click for details Another Christmas game arrived ex post, this one by Neat Escape, and it is as holidayish as possible. Shining Christmas trees, beautifully wrapped gifts, Santa with reindeers...well, we...  ...

2,533 Views
1 Comment
chrpa— Jayisgames needs your help to continue providing quality content. Click for details Welcome to Weekday Puzzle! Robert Alvarez (rob 1221) latest game is the only one not Christmassy in this WP - it's a math game, and very well...  ...

3,713 Views
13 Comments
chrpa— Jayisgames needs your help to continue providing quality content. Click for details Hi, welcome to the post-Christmas Special! As expected, more holiday games arrived a bit late for Christmas Special and so we can play them now - as...  ...

5,053 Views
1 Comment
chrpa— Jayisgames needs your help to continue providing quality content. Click for details The latest Mateusz Skutnik's 'Where is ....?' is here and it's for download only. The players, who weren't particulary happy with last two or three games of the...  ...