The Golden Years: Way Out West

Ah, the romance of the old west. Cowboys, cattle drives, the pony express... Also brush fires, coyotes, droughts, greedy land barons, and bandits who ransack towns and kidnap the population for ransom. It might not be as romantic as John Wayne movies would have us believe, but things were still pretty adventurous, a side of the times that Alawar chooses to represent in the time management adventure game The Golden Years: Way Out West. 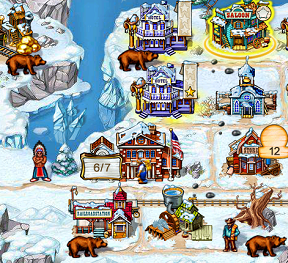 Gertrude had such a lovely life, married to handsome and hardworking Samuel and raising her son Jacob. Samuel got ambitious and bought the local general store, though, and soon the family was on their way to success. Then, disaster struck in the form of a suspicious fire which burned down the store and all its stock. Deeply indebted to the evil Mr. Van Der Horn, Samuel has been thrown into jail and Gertrude must, with the aid of young Jacob, earn a fortune to pay the robber baron back and get poor Samuel sprung. Fortunately, Gertrude is pretty competent, as she works her way from Appalachia to the great plains, then to California and beyond in her quest to reunite the family.

Gameplay in The Golden Years: Way Out West is a combination of building sim and time management. Each stage has several levels with their own sets of goals. Build homes, municipal buildings, commercial buildings and the like in order to accomplish both short term and long term goals. Starting with a decrepit locomotive given to her by her friend the kindly Professor David, Gertrude moves from town to town building and mining along the way. Houses and other buildings can be constructed using wood obtained either from scattered supplies that block paths or from a sawmill (if you can afford to build one). Homes and commercial buildings can only be built within the shadow of municipal buildings, and each building covers a different series of land plots. 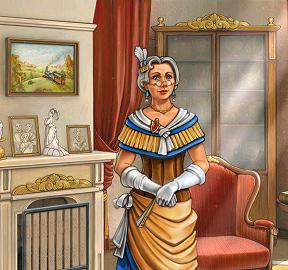 Accomplishing each "stage" of a level in a certain amount of time earns a gold star, and if you earn 50% or better gold stars in a level you can upgrade Gertrude's rickety locomotive into something sleeker and faster. Along with natural hazards like gullies that need to be filled in and wood and other blockages you can run into obstacles in the form of town drunks, wild animals, and of course the ruthless bandits who will demand lots and lots of gold to go away. Can you help Gertrude accomplish her goals in time to rescue poor Samuel from the pokey?

Analysis: The Golden Years: Way Out West plays like a nice combination of Build-a-lot and My Kingdom for the Princess, with lots of frantic action and story along the way. What really makes it stand out are the requirements for municipal buildings, as each covers a different number of plots and without that coverage you can't build necessary housing or commercial establishments. Trying to maneuver that coverage to your best advantage is a bit like fitting Tetris pieces together which add a nice puzzle challenge to each level. 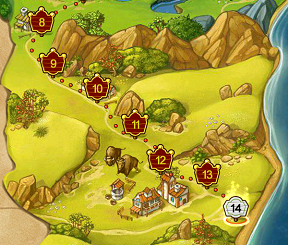 The graphics are amusing as are the animations, although they can be a little lost on the small screen of an iPhone. Best of all are the characters that you run into in every level, from the lazy town drunks to the greedy bandits, and the helpful Native Americans. Each level has different challenges and surprises around every turn. The music is a lively and appropriate accompaniment and the voice acting is competent and helps move the story along.

There are a few minor problems in scaling down a game this size to the iPhone, so if that's the version you're going with, take note. Managing to differentiate which areas need to be highlighted takes a deft touch at first as in the smaller scale things can be a little too close together. And although the story is engaging you certainly have to put up with the somewhat un-P.C. portrayals of the First Nations characters, pretty par for the course in any western themed game.

The Golden Years: Way Out West delivers a fantastic punch of time management and puzzle gameplay. With 48 levels, each more complex than the last, you are looking at hours of fabulous casual gameplay with some pretty interesting characters. So hike up your skirts, tie down your bonnet, and get ready for some frantic fun. Westward Ho!

Build 2 Water Towers: one at the right in the second row, and the other one to the right of the 3-star Covered Wagon.

Give the barrel of whisky to Happy Joe in exchange for the TNT.

So now you know the real story of what happen way out west during the Golden Years!

Build 2 Water Towers: one at the right in the second row, and the other one to the right of the 3-star Covered Wagon.

Give the barrel of whisky to Happy Joe in exchange for the TNT.

So now you know the real story of what happen way out west during the Golden Years!