Brick Singularity's iPad-only puzzler The Icarus Box is a great game to play in public if you want to look like a raving lunatic. A series of mystifying, deliberately obtuse and ambiguous mechanical/wooden puzzles revealed to you one after another where figuring out the rules and the condition for victory in each one is hard enough without the game cheerfully and randomly trying to make you shriek and throw your iPad across the room in terror. Essentially the game equivalent of those "based on a true story" type horror movies, The Icarus Box claims to be a faithful and detailed recreation of an actual, physical box whose interior is guarded by a series of bizarre mechanisms and locks you need to solve puzzles to get past. As you play, you unlock supplemental material that slowly clues you into the Box's history. And also as you play, the game's intro text warns you, you may experience... unexplained phenomena. Such as the tendency to swear loudly at the game, fling it down in a huff and declare yourself well shot of it, before immediately slinking back because you thought of something you hadn't tried yet. 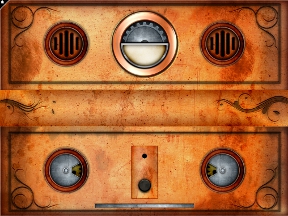 The Box consists of a number of puzzle Tiers, each Tier with its own progress bar, and solving a puzzle on that Tier gradually adds to that bar until the next one unlocks. Simple, right? HA. No. See, as I mentioned, each puzzle has its own objective and set of rules, but the Box never tells you what either one is. It's up to you to tap and swipe and mutter and gnaw on the iPad until you figure out what you're supposed to do. Clues can be hidden in the background material you unlock, or even subtly integrated in the puzzle itself, and don't forget about your accelerometer if you haven't tried everything. Anointing the screen with your desperate, salty, pathetic tears probably won't help, but it's therapeutic.

The Icarus Box is one of those games that really needs a trial version because it honestly isn't for everyone. The complete vagueness of everything from the goal to the mechanics of each puzzle is maddening at times in a way that even Pin Head would be like "Seriously?" over, and that's only something that will appeal to a specific type of player. If it is your particular hook, however, everything about The Icarus Box is a stunner. Its beautifully designed presentation is mysterious and mystifying, and the sheer variety of puzzles (95 in all) range from deviously complex to surprisingly simple... although that might be more because their abstract construction is such that some players will instantly look at a screen and know what they need to know while other players will be stonewalled by it. The actual frightening bits are... well... they're mostly jump scares, which are effective because the game's brooding silence means you'll typically have your nose up against the screen when it happens. While the story is less integrated as it is unlocked alongside, it is very intriguing in a very "House of Leaves" sort of way, except House of Leaves didn't stop and make me shake it up and down trying to disengage some elaborate lock every other page. Still, if you're the type of person who can't resist a puzzle and a mystery in one and love abstract puzzles, The Icarus Box is one of the most gorgeous, mystifying and engrossing ones you can hope to encounter. Now say it with me... what's in the baaaa-haaaa-haaaaax?!

Note the two symbols in the square tiles at the top of the board.

li>Daedalus in ancient Greek mythology is the father of Icarus and creator of the Minotaur's labyrinth.

By "unexplained phenomena" do you mean jumpscares? Those are annoying in any kind of game, but in a game where you have to be completely focused to even figure out what the goal of the puzzle is, jumpscares would be downright evil...

Hi Donut. As I stated in the rest of review, yes, they are jump scares. :)

Whoops. Totally missed that, thanks Dora =P
I'll be skipping this one then. It's a pity, aside from the cheap scares this sounds pretty awesome.

How far have people got with this? I am on the 6th tier and things are getting very creepy and difficult! I am struggling to even find half of the puzzles, they are that well hidden.

have a question. Just yesterday for christmas i got me a Nook. is this game incompatible for nook? just asking.

Not as of yet. When we publish our reviews, we include all links to all the known versions available at the time (we'll even try to update our older reviews with links to additional platforms as they become available). At the time of this review, the Icarus Box is available for iOS only.

Note the two symbols in the square tiles at the top of the board.

li>Daedalus in ancient Greek mythology is the father of Icarus and creator of the Minotaur's labyrinth.

Even walkthrough writers get stumped sometimes! If anyone has tips or solutions for puzzles currently missing from the walkthrough, please feel free to contribute in the comments below. Any help is much appreciated! :)