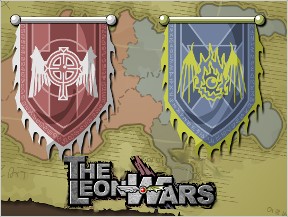 Ah, the classic tale. Humans meet monsters. Humans enslave monsters. Monsters rise up and strike down the human heir in an act of bloody vengeance. Really takes me back, you know? The story behind The Leon Wars isn't its driving force. This is turn-based strategy gaming at its best, putting you in charge of one of two factions, vying for control of the land.

You can play as either the humans or the maligned monster race, and although the difference is largely cosmetic as both sides have access to many of the same abilities, it's still nice to have the option. After all, some days you want to liberate some towns, other days you want to crush some innocents beneath your taloned foot. Whichever side you pick, you'll start the game with access to only a few types of units. As the game progresses, you can research new types of technology and beasts, expanding your arsenal. There are only two additional tiers to research, but the units you can create are diverse enough to satisfy most any of your combat needs, whether you want someone to hang back and cast support magic, or a big juggernaut on the front lines for tossing back your opponents like tic-tacs. If you've ever wanted to order a giant flaming sentient orb or a griffon rider into battle, this is the game for you. 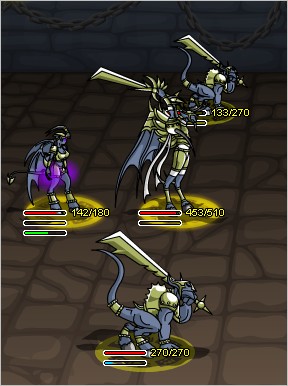 You construct your armies with gold and iron, and each unit (up to six in an army) has its own unique abilities and requirements. Create an army by first choosing a hero, and then fleshing out the rest with whatever units you feel are most appropriate. You have to choose where to place each unit in your army too, which is important since some units can only attack enemies directly adjacent to them, while others can bring the pain from wherever they are. When you encounter an enemy army, battle plays out like the turn-based RPGs of yore. In between battles, you'll need to heal your armies and bolster your defenses.

A save feature is included that lets you pick up wherever you left off if you need a break. Warning: There is no auto-save. You have to select the Save button manually.

Analysis: The Leon Wars really feels a lot like SNES classic Ogre Battle. You'll spend most of your time on the overland map, directing your troops to capture the nearby towns and mines that generate the gold and iron you need, while your opponent tries to do the same. It forces you to be more aggressive in your play-style than you might want, which sort of hampers some of the potential for real strategy. As you gain access to more research and technology, however, putting you on more of an equal footing with your enemy, things loosen up a little. And while the battles are straightforward, you're often left hand-holding your armies against even weaker opponents, which slows down the pace of the game. The option to have your armies automatically fight some battles would have been a welcome addition.

Still, for all that, the game manages to be a solid gem. It's surprisingly long and can be pleasantly challenging at times, and the tidy, gore-free presentation is easy on the eyes. This shouldn't be missed by any fan of turn-based global domination. And monsters. Feel free to put on your viking helmet for this one. I know you've got one.

[Note: The Leon Wars was released early last year, but if you missed it, now is a good chance to catch up with an unusually good strategy title. If you like The Leon Wars, you might also enjoy Brute Wars or Monster's Den.]

Maybe I'm just bailbotting here, but I seem to be stuck. It's telling me to create a defensive force even though I've done so, and won't let me move to a different screen.

This game has at least one more Nintendo-era inspiration: the background music was lifted pretty much note-for-note from the original Castlevania; the clock tower level if I'm not mistaken.

careful, selecting 'menu' after finishing a level wont save your game.

One problem is that armies on the brink of death will still be shown as having the same strength as healthy armies. The estimated strength only decreases once a unit is dead. It's true that injured and healthy units do the same damage, but it can be misleading. A few times I rushed into battle only to realize that, while the estimated strength was very high, my units were all near dying.

I definitely 2nd deflective's comment... I finished the 1st mission and clicked Menu accidentally... the game has no Auto-Save... that sucks, cuz now I have to start from scratch.

This is what I like to think of a potential game.

- added ability to save after each level
- reset your troops by a % after each level (one issue I have is that I did the menu w/out save thing and started over, so i just sat on all of the cities during the tutorial phase and build up a fully researched and upgraded army)

It kinda reminds me of Warlords.

It's 2009. Why do people continue to make games where you can't mute the sound and/or music?

a few problems
-they chose the wrong word for bringing back units. "reincarnate" doesnt really make much sense.
-the healing units barely make a difference, since they heal barely anything.
-the saving problem has already been stated.
-why, when you attack the enemies castle, do they have units from YOUR side? it makes absolutely no sense.
aside from these, it's an okay game

Yeah, mark me up as one of the few/many who somehow clicked the menu button and lost everything.

I did find the game enjoyable, though the complaints that the others listed are definitely valid and definitely annoyances.

...Except for the sound thing. You can mute sound/music once you are in a game, and that feature seems to work fine for me thus far.

Is there anyway of loading a game once you have saved it?

I'm probably being dim but I can't find a button anywhere to resume an old game.

Then I'm dim too, because I can't find the way to load a game either.

Press "Play Game" on the main menu, then "Load Saved Game" at the bottom of the screen. ;)

Pleasant game, but not well balanced. It's easy to farm early levels for unlimited resources, and then coast through the later levels with 9 fully upgraded armies and a full bank account.

It also seems like the demons are overall better than the humans- more damage and more hitpoints. If the humans have an advantage elsewhere (speed?) it doesn't play out as effective in game.

Several unit types appear unworth the effort. The dead-end units on the demon side (fire warrior and poisoner) aren't attractive at all- the fire warrior means giving up AOE for better single-target damage which is a lousy tradeoff, and the poison takes 5 turns to reach full effect on a single enemy. Likewise with the debuffer on the human side- I gave up an AOE nuke for a single-target slow?

The primary support classes- the demons' buffer and the humans' healer- are handy when the timing goes off right, but I found that in a large fraction of battles they did not make a meaningful contribution. Again, weighed against an AOE nuke they come up short.

I ended up with all of my armies consisting of a hero tank, a cerberus or phoenix, and a grunt, with 2 nukers in the back row. Grunts are too fragile for their position, which means always taking the hero tank rather than the nuker tank and also preferring a cerberus build rather than a 6-unit build; 6-unit builds usually mean paying to rez 2 grunts instead of 1.

I love this game. But one question. How do you choose to put one of the upgraded units in an army?