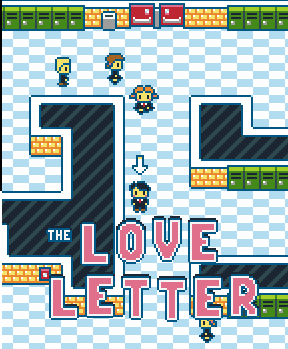 They call you the most popular boy in school, but frankly, you've never really felt it. Indeed, the letter from the secret admirer you just found in your locker is the first you've ever received. Now, you only have five minutes to read it before class starts, but with the hallways filled with your classmates, privacy is a rare commodity... and kids can be so cruel with their taunts, right? It's The Love Letter, a unique stealth adventure game by Alex Cho Snyder (axcho) and Pat Kemp.

Originally created for Ludum Dare Game Jam 22, with the theme of "alone", The Lover Letter is a sweet little game that has such a lack of irony to it, that it's quite refreshing. It is very short, but it's exactly as long as it should be. It has almost no replay value, but only because it does all that it sets out to do in a single play-through. So, if you're ready for a little mushiness on your coffee break, The Love Letter will have you less-than-three-ing for the rest of the day. <3

Cool little game. The mouse movement did get awkward at times, but a fun little diversion none the less.

jeez. I was ALMOST DONE reading that letter, when a kid snatched it from me. I wish the guy was a faster reader....

That. Was. Adorrrrrable. Nuff said. OK, maybe not.... I thought the mouse movement thing-y made it easier to move the little dude around, but to each her own (@TeeGee). You can also use the arrow keys, y'know ;) One little tip that makes it a looot easier:

duck into the little inlets in the hallways; it confuses your followers and allows you enough time to get some reading done.

Did I mention that this game. was. adorable.?

So cute.
I tried to attract the largest crowd I could, then outran them to the other side of the school to read.
Yeah, beat the game with more than 3 minutes to spare my first time through. So I played it again and deliberately lost.
Aww, poor kid.

I have always had a thing for black-haired girls...

Also, the bow in her hair was a cute touch.

A very irritating game. That kid should start punching those clingy, annoying jerks in the throat - then maybe they'd give him some space.

Woah there, Tenzhi. Remind me not to interrupt you while you're reading.

I thought the game was very charming! I only wish I'd figured out sooner that

hiding in an alcove breaks line of sight from your pursuers, causing them to give up chase.

Very cute indeed! Would have been fun though to have three endings instead of the two there are now. The third one beeing that you do not show up at the locker of the girl. Not that I'm no romantic, but the option would have made it replayable.

@Bouli: break the heart of the poor unpopular girl? that's a good idea!
The game is very hard if you dibt get the point- belive me. I didn't know that the kids will stop following you when you are hiding. Something like a tutorial could help.
Anyway, great game!
9/10

Those are some seriously annoying friends. Poor kid. He never learned the first rule of secret letter reading. You don't read it in a crowded hallway. You read it in a toilet stall.

Hmmm, excuse me for being the voice of dissent but this is garbage! 2 minutes of "gameplay" ! Sheesh!

Unless sound is absolutely necessary to game play ALWAYS add a mute button.

I almost always have something else playing on my computer when I play games. The first thing I do is look for a mute button. If there is not one, or it is not obvious, I close the window and move on.

@Itt, the game was made with Flixel, so you can use the - and + keys to change the volume, and the 0 key to turn the sound off completely. Sorry you missed it!

I love this game, it's so cute. I was walking by the lockers and

A white kitten actually came out of it and started walking around. I found out that when all of the kids go back into their classroom, the kitten follows.

It was a cute little Easter egg to find.

@trish916 If you play it on newgrounds you will get a medal called teacher's pet.

Thank you for explaining how to get the medal, trish916! And thanks for the tips, everyone else. :)
Great game. Needs a mute button, but really fun. >^_^<

Wow. I love little artsy (If not a little close-to-home) games like these. I think the creator got what response he wanted out of me: Running down the hallways as fast as I can, yelling, "Go away, you peepers! Don't you have somewhere to be?!"

It's a cute game, but it's a little annoying when all the people keep following you and you can't read the letter.

WARNING!!! This letter is top secret:

You must read it ALONE
before the 2ND PERIOD BELL!

To my secret love:

Hi! You don't know me, but
I've had the BIGGEST CRUSH on you
all the way since 3rd grade!

I guess since you are
the most popular boy in school
you probably have 100 girlfriends.
But if not, keep reading...

I think your wavy black hair makes
you look handsome and mysterious.

I have black hair, too.
Do you like girls with black hair?

You probably don't remember,
but one time you lent me your pencil
and when I was done you said
I could keep it.
I still have it!

Okay, I know you must think
I am the BIGGEST IDIOT
for writing you this letter,
but if you don't keep reading...

Meet me in front of my locker
right after the bell.
If you are there,
I will know that you like me!
If you are not there,
my heart will be broken
but I will understand!

[Please remember to use angled brackets when creating tags and to preview comments before posting! Thanks :) -Mod]

go back and forth from the little indent in the bottom right corner to the big hook-shape in the bottom left corner. Move only when people see you.

Wow, this guy must be really popular. So many people want to talk to him! I'm kina a loner at school so I most likely wouldn't have that problem if I was in that situation.