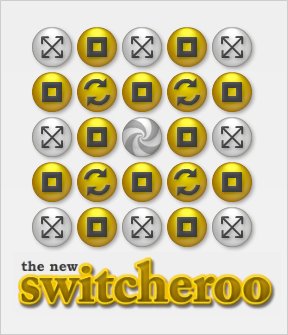 It may feel like someone's pulling the old switcheroo on you, but don't be fooled. It's Flash author Samgine rolling out The New Switcheroo, a puzzle game based on the Lights Out template, where the object is to turn all the bulbs in a formation to the same color. In classic Lights Out, whenever you click a bulb, it and all its neighbors switch states, from lit to unlit or vice versa. Over the course of 30 tricky and creative levels, The New Switcheroo adds a handful of twists, both figurative and literal, to that formula.

The first level will prime you for what's to come. A few of the bulbs display a plus mark, which means that clicking them will affect five bulbs in a cross configuration like you'd expect. The bulbs with a single dot affect only themselves when clicked. Later, you'll encounter bulbs that affect a diagonal line, or an X, or a diamond shape, or other permutations on that same idea.

The real confusion starts with the bulbs that have the power to move other bulbs, or even rotate them. That may not sound so bad, but wait till you try to wrap your poor brain around it in practice. Complicating matters is the fact that you never know which color you're going for, so it's easy to get lost trying to turn everything white, when the only solution is to turn everything gold. The difficulty curve is fair, but it takes a few giant steps to reach the mountainous heights of the hard levels. I swear the very last puzzle looks like Samgine just pulled out 60 random bulbs from a hat.

Analysis: Other than a brief tune when the game first loads, The New Switcheroo has no sound effects and minimal graphics. The only nod to presentation is a cute option to change the two main bulb colors in the game (This also serves to make the game more colorblind accessible). I miss having some basic audio/visual perks to go with my puzzle solving, but they're not really necessary. You've always got the option of shouting "PING" and making blinking gestures with your hands at the screen, whenever you beat a stage.

30 levels isn't very many, but you'll see a new idea on almost every one. There's enough variety to make each puzzle feel distinct, rather than just a larger, more complicated interpretation of the rules. There are still places this concept could go (gravity-changing bulbs? bulbs that burn out after a certain number of moves? long florescent bulbs?), but it's a solid beginning, more than enough to keep you pondering for an hour or two.

I like logic puzzles, but for some reason have always been rather put off by this light-bulb style puzzles. I don't know, there's just something too frustrating in never knowing whether you are moving towards your goal or away from it.

That said, I like the smooth and minimalistic interface. The only thing missing is "reset level" button, because you need three clicks to restart it. Other then that, a nice puzzle game, especially if you dig the lightbulb puzzles.

This game is awesome in a really painful way. The thinking involved to solve these reminds me of doing a rubik's cube.

Thanks for the review and all the feedback/comments!

We will definitely take all feedback into consideration.

We will definitely add a reset button and we plan to get into adding sound effects to our puzzles in the near future.

baba44713 already commented that a "reset" button is missing. there should also be a "return to main menu" option. other than that, neat concept. and i didn't miss sound effects, as most of the time, i have my speakers off anyway.

This game doesn't work for me, at all... the buttons do nothing. Running Flash 10 on Vista in Firefox here.

lukas and anyone else experiencing issues, if you have a sec, could you send me an email at new-game[at]samgine dotcom

Yeah, a reset button would be definitely fine, but displaying the goal of the level would be too, and complementary at that.

i really liked the different way you had to analyze this with diagonals and squares and diamonds. different from other games i've played of this genre. i thought it was really original and fun. the original poster said it best:
"There's enough variety to make each puzzle feel distinct, rather than just a larger, more complicated interpretation of the rules"
but when there's the rotate and spin tiles i found myself just guessing and testing rather than analyzing and puzzling.
thats my 2 cents. maybe some people can do that easily but my dumb brain found that incomprehensible.
i skipped those levels and had a lot of fun on the others. great game.

Re: Level 3, read the instructions carefully and examine your assumptions.

You don't need to turn the lights on.

You can turn them off instead!

Level 5 can be done in 6 moves istead of 7 as the goal suggests:

I need help with level 9! I love this game nonetheless. It's really cool. (:

Tgulli, what do you mean? I don't undertsand it.

Hmmm...nothing happens when I click on the link. I'll try quitting Camino and reopening the browser.