The Sea Will Claim Everything

Can you foreclose on a cave? It seems the goons who invaded Underhome, domain of the Mysterious Druid in the Lands of Dream, think so. With Underhome, itself a living, thinking thing,

in chaos and the druid Niamh missing, it falls to a stranger from another land to help set things right... you! In The Sea Will Claim Everything, the latest story-driven adventure from Jonas and Vera Kyratzes, go on a surreal introspective journey packed with magic and memorable characters as you strike out to save the biotechnological dwelling of Underhome on the Fortunate Isles.

To play, just click. Everywhere. Nearly every object in the game has a little something to say and the best way to enjoy the game is just to explore and let it all wash over you. You can navigate around by clicking on doorways, or by using the big green arrows in the top-right corner of the user interface. Below that is the stone tablet that lets you, save, load, or Weird Sound. The map will let you travel to other locations once you're out of Underhome. 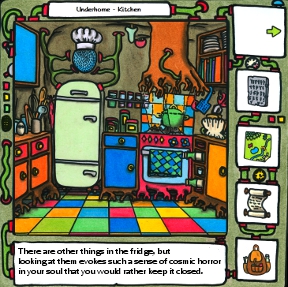 The scroll keeps track of all your current objectives. Lastly, but not leastly, the backpack contains your inventory where you can better examine things you're carrying with the typical adventure game commands like Touch, Smell, Taste, and Mouse. When you're talking to someone, you can click on the list of topics that appear in the top-right corner of the screen to find out more about that particular subject.

It goes without saying that your quest to restore and save Underhome from foreclosure is going to be anything but straightforward. Just finding your way outside its walls is going to take some clever thinking. The Lands of Dream, it seems, aren't exactly the lands of plenty these days... at least not for everyone. There's some political unrest simmering as economic problems begin to spread across the land... and naturally nobody can find the guano or potions of Jellification they want either. You'll have to grease a few palms and sail around the sea to get to the bottom of things, and maybe even think a little bit about the things that are important in life in the process. 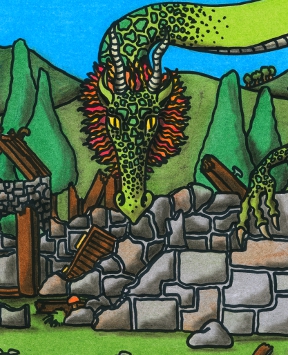 Analysis: The Sea Will Claim Everything will appeal to you if you prefer something you can sink into a lose yourself in for a long time, like a hot bubble bath with a good book. It's that rare sort of story that pulls on its own rich mythology as much as it does your own imagination, and weaves a captivating experience that can be hard to step away from. It's chock full of humour both subtle and silly, and a whole bucketful of references to all things nerdy, but more than that, it's also packed with the same heart, thought, and emotion you've come to expect from Kyratzes' titles. Rarely has a fantasy locale been so aptly named as Kyratzes' enchanting and baffling Lands of Dream. I don't know about you, but my dreams are rarely logical or coherent, and the strange but inviting world Jonas has created with the help of his wife Vera's gorgeous illustrations perfectly mimics that sense of surreal displacement and overload of odd details.

In fact, for some people, that's going to be the downside as well. If you're an impatient or simply logical player, then the sleepy rhythm and outright odd puzzles and plots in this game might be a bit much. With so many things made clickable, and so many puzzles simply revolving around fetch-quests, it's easy for the mood to take a detour into the frustrating when you're not sure if you're missing an item. There's just so much to see, and so many tiny details that unless you really take your time you can get a bit lost. What? What am I missing? Was it that spider? He's just a Bob fanboy! Did I forget to combine the Poo with the Essence of Derek? Is it the mushrooms? Which one? The jocular one? The subtle one? The one pondering the rights to freedom and ownership as they relate to the kingdom?! What do you want from me?!

The other issues that make this dream occasionally bumpy are largely technical ones such as a clunky and cumbersome user interface that makes inventory management and the like a little obnoxious. It also would have been nice if crafting ingredients in the labs displayed their named before you clicked on them, or let you swap one out if you made a mistake instead of automatically adding it. From a literary standpoint, there are also some times when it feels like the message being conveyed isn't quite as subtle as you might like, occasionally soap boxing a bit in contrast with the story's more deft, cleverly woven notes of emotion and thought that crop up throughout.

Those, however, are minor problems, and if you love Kyratzes' earlier adventures in the Lands of Dream, or even if you just want a rich storytelling experience, you're going to love this one too. Best enjoyed sunk as low in your chair as you can get with a glass of your favourite beverage and no hurry whatsoever, The Sea Will Claim Everything is the best possible way to enjoy an evening. With a variety of unusual settings you'll want to spend your time exploring and a cast of characters memorable for more than just their strange designs. There are times when it really feels like everything from the setting to the dialogue is speaking directly to you, and for those brief windows the Lands of Dream becomes as tangible as the world outside your window. Highly recommended.

The Sea Will Claim Everything Walkthrough now available!

The Sea Will Claim Everything Walkthrough

Chapter 2: The Isle of the Moon

Chapter 3: The Isle of the Sun

Chapter 4: The Isle of the Stars

Flip the red switch on the upper left that you had to turn on in the beginning of the game, and the screen will go black. With the graphics off, you can proceed into the cave. There is only one place in the cave where you can have the graphics on, which is the place with the Isle of Becoming location, described below.

Chapter 5: The Timber Tyrant and the Oracle

The Sea Will Claim Everything Walkthrough

Chapter 2: The Isle of the Moon

Chapter 3: The Isle of the Sun

Chapter 4: The Isle of the Stars

Flip the red switch on the upper left that you had to turn on in the beginning of the game, and the screen will go black. With the graphics off, you can proceed into the cave. There is only one place in the cave where you can have the graphics on, which is the place with the Isle of Becoming location, described below.

Chapter 5: The Timber Tyrant and the Oracle

a game by the person who made The Book of Living Magic? I'm definitely getting this!

Where can I find the

There is a merchant at Port Darragh who might be able to help.

The relative lack of comments and ratings on this review is rather disappointing. I was very excited for this game and bought it the moment I heard it was out. It's a lovely trip back into the Land of Dreams, complete with all the things I like so much about the previous ones: fun characters, a bittersweet story, lovely music, beautiful hand drawn graphics, and so, so many quirky little descriptions for everything. I kind of wish there was a wiki-like page documenting all the subtle jokes and references contained in the descriptions, because there's no way anyone could get all of them, but they're so much fun. I found one book with Doctor Insano cited as the author, and another by Oreo Antwiler. I would not have guessed Jonas was a fan of the Spoony Experiment!

The lack of attention this game is getting is downright depressing. It really is fantastic. It has probably the widest scope out of any of the Lands of Dream games. The art is wonderful as always, the music is absolutely fantastic, and the writing is clever, smart, poignant and pointed.

Jonas has an interesting blog post in response to the idea that his writing isn't subtle enough, and I think he actually makes a good point. http://www.jonas-kyratzes.net/2012/05/29/not-subtle/

It also got me thinking about some of the best works of fiction I've read and how many of them aren't subtle at all. Take Fahrenheit 451 or 1984 as two obvious examples that jumped to mind. Both of these are books that have a clear subject that they are dealing with and they deal with it right up front. You'd be hard pressed to call either book subtle, but they are none the less some of the best books ever written.

Kochyli Beach to get the Mnemosyne Shell? I assume it's the bottom beach on the Island of the Sun, but the guide doesn't tell you how to unlock it...

The Infinite Ocean introduced me to Jonas Kyratzes and company. I've played just about everything else he's worked on since, and so gladly dropped the money on this game once I finally had internet access in my home.

This game pleases me.

I really wanted to like this. But in the end, it's just "OK". Somehow, the magic present in BoLM and The Fabulous Screech is just not here anymore. The entire thing feels more like a chore than a game.

The problem, it seems, is in the (lack of) limitation imposed by Flash. Those limits are actually a strength and not a weakness, making for a more succint, focused and heartfelt experience.

How to go to Kochyli Beach on Sun Island? I have already spoken to Medusa.

To get to Kochyli Beach, first talk to Borin on Moon Island. He will tell you to talk to Medusa. She will add Kochyli Beach. :)

I really love this game but i really seem do can not find Medusa. Can someone tell me where she is or if it is a bug maybe?

How do I trigger Bolin?

I talked to him and nothing appeared