The Theatre of Shadows: As You Wish

Vogat Interactive, creator of Guardians of Beyond: Witchville and the Reincarnations series, knows how to make a stunning casual adventure game. The Theatre of Shadows: As You Wish is another excellent example of this, combining a rich story with serious puzzles, creative mini-games, and gameplay that gives you surprising freedom to roam. It's a challenging and well-illustrated steampunk-style adventure, and it's a journey you're not going to forget anytime soon (hint: living shadows and evil puppets!). 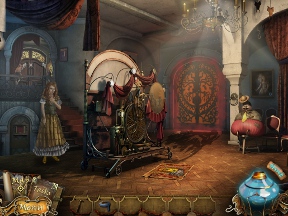 You are Elu, the Hunter of Darkness. Bound by legend, you must appear to help anyone who calls your name. Today that person is Donna, wife of Nicholas and co-owner of the Theatre of Shadows. Nicholas was fond of puppets, and he put on some amazing shows in his time. As it turns out, though, the puppet he used to draw crowds had a few magical properties nobody knew about, namely the ability to rip open of a portal that allowed an evil spirit to roam free. Oops! Now, it's your job to find Nicholas, rid the demon from his body, and seal the portal to stuff those evil shadows back into their hiding place.

Each chapter of Theatre of Shadows is filled with a dozen or so scenes and around twice as many puzzles, all requiring skilled use of inventory items you find scattered throughout the area. Hidden object scenes are kept to a minimum, and when you do encounter them, they're short, relatively easy, and feature a few interactive elements that liven things up considerably. There's a lot to do and a lot to solve before you gain access to new environments, and you'll have to leave many puzzles unsolved as you open new areas, a small design choice that makes the game feel much more open and free. Some items even have multiple uses, so if it's still in your inventory, you'll need it later. A hammer can always come in handy! 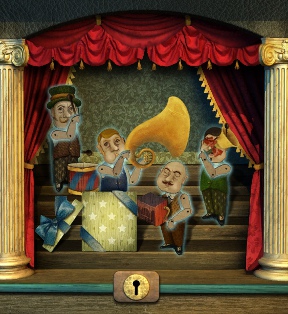 Analysis: Don't let the familiar-sounding story trick you into thinking Theatre of Shadows is your standard casual adventure game. Really, it shares more in common with traditional adventure games of decades past than modern releases, especially when it comes to puzzle design, level layout, and overall difficulty. It still feels very much like a casual game, but the experience you'll walk away with hints at much more.

The Theatre of Shadows: As You Wish forces you to actually pay attention to what you're doing. You can't just go around, picking up items and randomly clicking on things until puzzles work themselves out. Instead, you should keep a mental catalog of everything you pick up, noting possible places to use them in the near or not-as-near future. That takes some of the casual feel out of the experience, but it makes for a much deeper, more intriguing game.

Mini-games play a strong role in Theatre of Shadows, and for the most part, they're unique diversions you'll be eager to complete. Even when they're not, assuming you didn't choose the Extreme mode of difficulty when the game began, you can skip them and continue with the rest of the game. The in-game hint system is also bent on giving you a hard time, telling you there's "something" that needs to be done "in this general area". Isn't that the definition of a hint, anyway? At the very worst, some of the puzzles stray off into iffy territory with mildly questionable solutions, but it never comes across as frustrating or out of place, just challenging. The good kind of challenging.

The Theatre of Shadows: As You Wish is a rare casual adventure game that aims to recreate the style and depth of a larger, not-as-casual adventure, the kinds of games we used to salivate over a decade or so ago. Now, with a modern layout and Vogat's usual smart sense of storytelling and pacing, you can get all the flavor of a sturdier adventure without having to quit your day job to play it!