Murder, kidnapping, explosions. The life of a cop is not a dull one. You play as Baltimore detective Sam Pearce in Relentless Software's latest 3D mystery release for iOS, The Trace. The proprietor of a local business is found dead, and foul play is suspected. It's your job to figure out what happened. At the beginning of the game, your lab helper Alex sets you up with a new high tech remote forensics system that allows you to instantly run fingerprints and test blood samples, which turns out to be quite handy during the investigation. Tap on objects of interest to get a description, or perhaps zoom into an important spot. Hold and swipe to look around the room. Some items you tap on will go into your inventory which you can access on the left of the screen. When you find a piece of evidence, it will fill your screen. Sometimes you can push buttons or otherwise manipulate the item and you can always deploy your forensic scanner to look for clues. Tap the scanner icon on the right to activate it and tap and hold over the evidence to scan it. When you find something of import it creates a lead for you on the investigation screen. 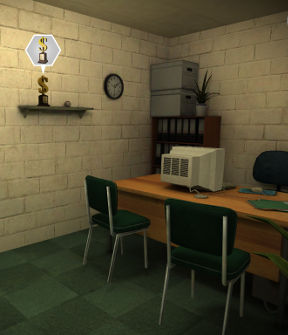 It's this investigation screen that really sets the game apart from other mystery games. As you gather clues and leads they accumulate on this screen. Leads have questions that need to be answered with the evidence you find at the scene. Tap a question mark to read the question, then drag the clue or clues you think explain the question to the box to see if you're right. If you answer correctly it often triggers a short cut scene with your best guess about how something happened based on the evidence at hand. You must find all the clues and answer all the questions before you can leave the scene of the crime. This gets you thinking logically, and it's fun to see the narrative come together a little at a time in light of what you find. Not since The Room have I seen such attention placed on manipulating 3D objects and the world around you. You can open nearly every drawer and cupboard you come across, as well as rotate items you pick up to see them from all angles. That being said, The Trace doesn't do it quite as well as The Room. The controls are not as smooth as I'd like, and at times make you tap or swipe in seemingly very specific spots before being able to open a box or cupboard. So if you have a hunch that something is important, make sure to tap it more than once, just to be sure, and make sure to comb over your evidence carefully. Along with this comes full 360 degree rotation of the screen. You can look at the floor, the ceiling, and everything in between, and you're going to have to if you want to solve the case.

All of this serves to give the game a very hands on feeling. A feeling that you are actually doing something to solve the case, rather than just clicking and watching the results unfold. If watching police procedurals on TV has taught me anything, it's that most homicides can be solved in under an hour. And while The Trace thankfully has more playtime than that, some may feel the three-ish hour play time is too short, especially since when you're engaged in a smart game like this, the time does seem to fly right by. The Trace delivers a wonderfully immersive experience with a satisfying narrative and innovative gameplay, with a great soundtrack to boot. Yes it did leave me wanting more, but only because I enjoyed my time with it so much. Here's hoping we'll see more in the series.