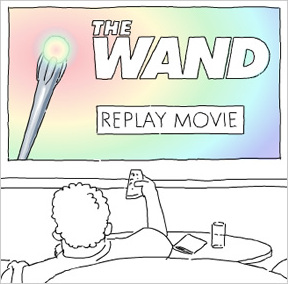 Winner of the Intel Indies film contest last week, The Wand is an animated short film by artist Nick Worthey and backed by Atom Films.

Ever wonder what you would do if you found a wand that granted an unlimited number of wishes? That is just what happens to the central character in this Flash movie that is both humorous and thought provoking.

Would it be time to say goodbye to the same old dull routine and usher in a new age of wealth and prosperity? Would you use your powers for good, or would you take a more selfish path and keep it all to yourself? Regardless of the choices you make, one thing is certain: nothing would ever be the same again.

Nick's delightful and entertaining Flash animation took top honors in the contest and earned him $45,000 in cash and prizes. Flash? Yes, please. Click.

And I suppose 'the wand' is just a metaphor for the artist's pencil with which he created his award-winning piece. =)

A veritable Harold and his purple crayon.

I thought it was a very witty piece of work!! I really enjoyed it.

I checked out his other pieces of work as well...they are all really great. He's very talented...especially his caricatures!!

I thought that was fantastic. I think it was made a gajillion times better with the 'endings' gag.

Jay I LOVED HAROLD AND THE PURPLE CRAYON WHEN I WAS YOUNGER...this is an amazing piece of work and i LOVED it!!!!

wow . . . deep . . . i liked the part about the two endings. it showed the point where he had to make a decision, whether to keep his rich and stylish life, and therefore die, or put things back to normal and help others, and therefore live. hmmm . . . it'll make me thinnk twice the next time a mysterious ufo lands in my house and i find a mysteriously glowing stick. 10 out of 10.

I enjoyed this short film more then 4/5th of the games on this website. And I enjoy most of the games.

Excellent, both endings. At the first *Hollywood* ending, I was about to show the film to my kids, but after wathcing the second ending, I am not so sure about that. Great movie.
I like the site, by the way.

very wierd. but i liked it. a very LONG head.
its a kool movie

I LOVE this flash. It just goes to show that it's the feel, not the eye candy.

I'm so glad you posted this. It made my day.

Excellent! I especially loved the bit where he decided to give up his rich life style. really deep stuff, how he had to learn that it was either be caged up the rest of his life with the wand all to himself, or being free but keeping low

fantastic movie! i love atom films. if you truly have a dark sense of humour, check out "i love death."

nice - a moral tale with a sense of humour. nice touch that the wand's use brings colour to a monochrome world

Loved it. Short, to the point, very well made.

it reminds me of the coneheads..
a well-made flash anime!

every time its on atomfilms, it doesnt work! it does the add, then blank! nothing! zip! somebody tell me whats wrong!

O.o That guy has a really big head!

This guy (the character) has no imagination. Good looks, nice car, nice house??? You can get that with plain ol' hard work and luck. Imagine if this guy read sci-fi and/or fantasy. The smart kind. Heck, even superhero comics!

Imagine if he realized he could do anything. Water the Sahara. Fix global warming. Create new lifeforms, even new planets! Terraform Mars and teleport half of humanity there. The list goes on. The wand isn't money--it's omnipotence!

And if any of his wishes went wrong, he could repair it with another. He could even grant himself precognition, to prevent wishes-gone-wrong, and embed the wand in his flesh so he can't drop it--after all, he could make subordinate wands, if he wanted to share the power. He could wish himself omniscient, so he'd never make a bad choice.

All the knowledge in the Universe, all the universe as man's playground... The impact on humanity would be a lot greater than any threat to "national security." I'll bet that was just an excuse: obviously, whoever's in charge wanted his hands on such power!

Ok, back to the mundane world we're all banished to, that we call reality.