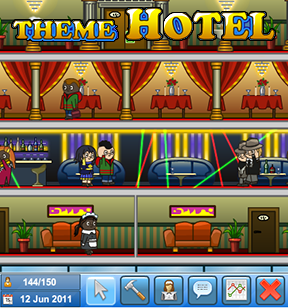 Forget owning a quaint B&B on the lakefront. Haven't you always wanted to lord it over an entire tower, Trump-style? Well in Theme Hotel from Toffee Games you can do just that. Inspired by games such as SimTower and Theme Hospital, this simulation game puts you in charge of building a hotel from the ground up and taking it all the way to five stars.

A simple little game, Theme Hotel excels in user friendliness, from the excellent tutorial to easy options to speed the game up and change magnification, and contains plenty of thoughtful touches such as the ability to mute the game before the sponsor splash screens. Once you get your hotel up to five-star status, there's nothing more to do in-game, but it's fun to change the magnification to 150% and pan around to check out the adorably hilarious gyrations of the characters in the disco or the ball-tossing bowlers. If you're looking for something a little more bite-sized than a downloaded sim game, yet still immersive and addictive, Theme Hotel will check you in. Just... build another reception area because there's a big queue already. And more elevators!

I enjoyed the 'build and office' game... so this one comes with a hint of 'yay'.

Of course, it is similar enough to have the same appeal, but different enough to feel new and refreshing.

I only have two major complaints.

WHY DOES IT PAUSE WHEN YOU unclick the window. I would LOVE for it to be able to sit and run it in the background, while, say, I type this review.

YES, I KNOW MY CAFE DOESNT HAVE A WAITER. Oh my dear rasberry gods, that person is annoying. Give me an option to either fire her, mute her, or that, but LET ME GET RID OF HER. Yes I know my hotel is 10k in debt. Yes I know my cafe doesn't have a waiter. I CANT HELP IT... so stop nagging me.

I finished that a lot more quickly than I would have liked. I'll probably play again, if only to tinker around with my elevator setups. I wound up with six 10-person elevator shafts going up and down my 40 floors and I still had guests complaining. I wonder if having it broken up into 10-floor shafts would make things better or worse.

Got to the end, but ye gods are these people obsessed with elevators. More than half of my hotel consisted of elevator shafts, and still they complained about the queues.

Not allowing the game to run in the background really ruined it for me. Sitting and waiting for my loans to be repaid so I can go up a level is not exactly fun...

I used one of the large elevators alternating every 5 floors (1, 5, 10, 15, etc) and that worked well. No complaints from guests. I guess they only complain if they are waiting too long for an elevator but have no issues with taking 10 elevators to get from the top to the bottom of the tower. As long as they're moving, they're happy.

Question for reviewers... is this comparable with https://jayisgames.com/archives/2010/11/corporation_inc.php ?

@Shudog: It copies the style almost exactly. It's hovering on the line between homage and ripoff, in my opinion.

To me, at least, it is comparable, as a second hand clone. Decent, but NOT as good as the original. There are flaws (not allowing it to run in the background, that annoying pop up girl etc(... there are 'ticks' against it, that make it 'fun' but that one MUCH better.

So a bunch of shorter elevators might work better for customer satisfaction than longer ones? Will have to try that.

At first, I thought, "Come on, guys! You have FOURTEEN elevators to choose from! I can't build anymore of them!" But then I followed one client, and saw it took him 20 days just to get from the reception to his room on the 4th floor... Now I feel sorry for them.

I have a different take on the "clone" idea, Shudog. To me the fine point seems to be that each is made by different developers. In general, this, Corporation Inc and all building sims of this type copy the Sim Tower concept. This one is just a mini-version, like a sim snack instead of the full meal. It's different enough to be enjoyed for what it is.

If the multiple-short-elevators approach works, that would explain why extending an elevator is so cheap compared to starting a new one.

Building a 'snake' of shorter elevators is definitely the way to go. Two columns of elevators will keep everyone happy, you just need to break them up.

Can't rip off the Office-building game, because they're both based on this gem:

General help for progressing through the game:

Expensive hotel rooms don't seem to bring much income. Instead buy expensive recreation facilities. Your first pool, disco and cinema pay for themselves really quickly. If you ever notice one looking nearly full, building another one may be worthwhile.

Help for the Elevator complaints in the endgame:

The game is actually pretty accurate about elevators, since just like in real life you can't add additional cars to a shaft. It's better to build one elevator for floors 1 to 11 and another for floors 11 to 21, than to building one shaft going up the entire height.

I got to the point in the endgame when the only thing stopping me from getting five stars was elevator complaints. My solution was to expand sideways, then demolish the top five floors of my hotel (down from 30 floors back to 25). This provoked a gradual but steady reduction in complaints about elevators until I was within the allowable limit. I could already see my rooms getting cleaner by the time I won the game.

Shudog: Corporation Inc. is better. Theme Hotel is actually pretty limited and annoying in what you can and must do. Corporation Inc.'s system of simultaneous objectives is more fun.

Casa Marmite is now a 5 star hotel! I'm going to keep building for a while just for the hell of it.

any other games like this. corp inc i know.. anything else?

I love this game!
My hotel keeps going almost broke and I have been spending almost nothing though XD I've kept it going though, and no loans! :)
I have learned to leave an empty path up through the floors for the staff elavator though XD otherwise you do a lot of demolishing.... I haven't made it to 5 stars yet but I really like it so far!
The lady with the tips is very helpful I think. She was like "your cafe has no waiter" and I thought "holy cow, it doesn't?! no wonder customers are complaining!" lol I had forgotten to hire one... and I like that it pauses if you click off so if I check something in a new window m hotel isn't running alone to meet some catastrophe without me. ;)

I give this game a 5 star rating!