They Took Our Candy 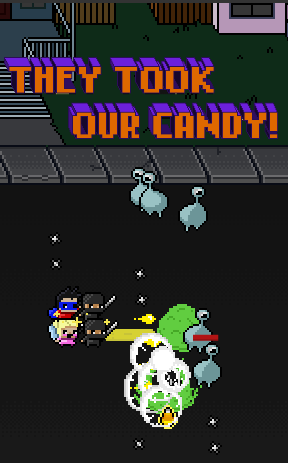 Trick or treat? Neither... alien invasion!! They Took Our Candy, a sidescrolling shooter from Level 1 Wizards tells the story of the day aliens stole all the Halloween candy. Only your group of hyperactive, sugar-addicted trick-or-treaters can stop them and get the candy back. After selecting four characters for your group, each with their own stats, attack, and special ability, it's on to the mean streets of your local neighborhood, where the aliens are in control. Your team moves and fires together, with firing done automatically and movement mapped to either the [arrow] keys or [WASD]. Pressing the [spacebar] unleashes all four special attacks at the same time. In between waves, the candy you've collected can be used to upgrade your team.

At first your group is slow and weak, but as you upgrade and the sugar rush takes effect, they become a dangerous force. Of course, the enemies get tougher as well, and since there are no continues, if your group is defeated, it's back to the start. To take the sting out of defeat, the candy you collected goes towards unlocking new characters and bonus attributes, giving you more power and more choices in the next round. With a cute retro pixel art style, addictive gameplay, and just the right level of challenge, They Took Our Candy is a sweet treat for anyone who just can't wait to go out trick-or-treating themselves. Just remember - eating that much candy in real life only upgrades your dentists next pay packet!

Play They Took Our Candy

Even easier team to win game:

Three ninjas and a cat. The cat's rapid fire attack special just obliterates anything along with the three way shots ninjas have, since the rapid fire affects the ninja attacks as well.

4 cats. The thing is, their specials stack, so when you press space bar, you have a SUPER LASER BEAM OF FISHY DEATH. Trust me, it's fun

4x Witches
Not only do they get a similar attack speed buff like cats, but also a movement speed buff, and with +40 special recharge, at full upgrade it's nearly constantly on. Very easy boss battle.