Storylines in the adventure/hidden object hybrid genre of casual games contain a massive range of scenarios. Some are set in the past, some feature magic and curses, some feature an orphan on a quest to find their family, some feature time travel, etc. But what do you think about a game having all of the above? And more? Check out Time Mysteries: The Ancient Spectres by Artifex Mundi to see how that's possible! 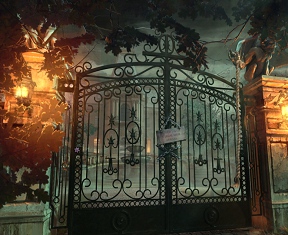 A sort of prequel to Time Mysteries: Inheritance, Time Mysteries: The Ancient Spectres begins in 1830 where you, a young orphan, receive a visit from a mysterious stranger carrying an even more mysterious package. Inside is a letter from an unknown aunt and news of an inheritance: a mansion. Our heroine travels to said mansion to discover it run down and abandoned. Once inside things become even stranger, such as the broken seal that was containing an evil sorceress, and a time machine that allows you to travel back and forth between the mansion and Venice, Italy during different eras. The story eventually incorporates a cursed mansion, the cursed family who lives there, Merlin himself, his evil apprentice Viviana, and a lot of time hoofing it out to make things right.

If you've ever played an adventure/hidden object hybrid you know the drill: changing cursors indicate navigable areas, places of interest, and things to pick up; sparkles indicate things that need a closer inspection (absent in the expert mode). There's also a bottom-loading inventory, a refillable hint feature, and an ever-present notebook to keep track of the story and various clues. To this mix are added a few new features. Once you've found the time machine it goes into your inventory and can function as a map to show locations from the various eras as well as allowing the player to instantly travel from one place to the next. The notebook tracks not only the story and the clues but has an objectives area as well that organizes the main goals of each chapter of the story. 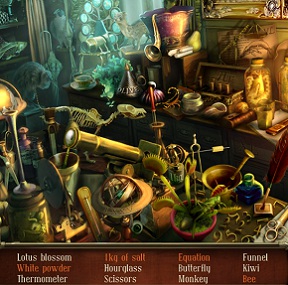 Time Mysteries: The Ancient Spectres has a nice mix of puzzles, mini-games, and hidden object scenes scattered throughout the locations. The puzzles are of the logic variety and vary from easy to difficult, and the mini-games, though familiar, are beautifully done up in the style of the period (1830). The standouts in this game, though, are the hidden object scenes. The scenes themselves are cluttered and a little dark. The lists of items include things that must be manipulated or otherwise interacted with to find. There is both a refilling hint timer and a "sonar" device that shows the outlines of various items that need to be found. What makes the hidden object scenes so unique, though, is the mini-game toggle that each contains. To the left of the hint button is the mini-game button, allowing the player to fight their way through a "cluster" version of a match-3 game in order to find the list items rather than straining the eyes to spot objects in the "junk-pile". For those who don't have the patience for object finding the match-3 alternate is a nice way to keep the game rolling.

Analysis: With its gorgeous graphics and haunting music Time Mysteries: The Ancient Spectres is a visual and aural feast, but that's not what makes it stand head and shoulders above the crowd. There are a lot of pretty looking hybrids out there, but very few that feature as much attention all of the elements of the game, be it the story or the mini-games and puzzles as well as the hidden object aspects. 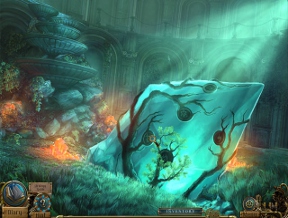 The visuals are lush and inviting and with two modes of play (regular and expert) a wide range of adventure players can enjoy Time Mysteries: The Ancient Spectres. Artifex Mundi has created a fun balance of exploration and gameplay that will appeal to a wide audience. What makes the game really unique, however, is that ability to completely play through the hidden object scenes with a match-3 game, giving a nice choice to those who don't perhaps have the patience to deal with finding over a dozen objects in the crowded backgrounds.

There are a few minor flaws, such as the clickable areas to pick up objects being either too small or too large in some of the scenes. Unfortunately, the game has also succumbed to the practice of putting a chapter that completes the story as the "extra" adventure in the collector's edition. Fine if you spring for the bigger release, but not so fine if you're not interested in the other extras.

Time Mysteries: The Ancient Spectres is a pretty hefty adventure in these days of incredibly shrinking gameplay. A meaty story, stunning visuals, amusing and entertaining gameplay all add up to a fun ride through time and space.

A Collector's Edition is also available. It includes wallpapers, an extra adventure, the ability to replay some of the mini-games, and a built-in strategy guide. Remember that Big Fish Game Club Members pay only $13.99 for Collector's Editions (or 2 club credits), and collector's editions count 3 card punches of 6 total needed for a free game.

Thanks to Kyh for the walkthrough!

This is a great game. Love the philosoraptor reference in the extra chapter.

Thanks to Kyh for the walkthrough!