In the ancient days of yore as our great forefathers carved the first rough-hewn computer games from massive slabs of granite, blocks of marble and the depths of the pixel mines they learned that if only you had a worthwhile play dynamic, you didn't actually need a lot of impressive graphics or sound effects to make a game enjoyable or endearing — which is incidentally how they managed to play ASCII-based roguelike games like NetHack and Omega. The moral of course is that substance beats style, and Time of Exploration, androdan's new resource management simulation game for Android, demonstrates this. Despite the whole game being much less than a megabyte in size and two-tone hand-scrawled icons being the closest you'll encounter to graphics, androdan nevertheless presents a darn good village building sim where you start out gathering stones and lumber and eventually end up managing an international empire complete with wonders. 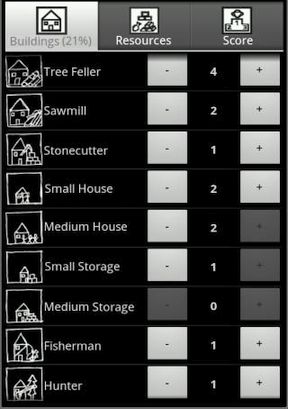 The structures you build will generate some resources, and usually require others. While the Tree Fellers and Stonecutters provide trees and stone respectively, Sawmills will take those trees and convert them into useable lumber. Finding the optimal balance of structures yielding more basic resources and others which use them requires finesse and a bit of basic math. If you have the resources needed to build something, a + button will be enabled for it allowing you to build it instantly. If it's the first time you've built something, that will usually unlock a new structure too. Building up your civilization takes the time required to amass enough resources to unlock everything, which varies based on how effective you've been at getting the most efficient production. Near the endgame you're presented with options for different types of Wonder structures — which unlock others — and how fast you've managed to win the game earns you a ranking on the online scoreboard. Since the Wonder options are mutually-exclusive, you'll want to go through the game to unlock them all. You're likely to find you've done a whole lot better the second time around once you've gotten the hang of the resource supply and demands, which can be a definite confidence booster. Time of Exploration uses a complex supply chain in which the same resource may be used by more than one facility — water from a Well you've built could be used with flour in a Bakery to make bread for example, or along with corn in a Piggery to produce meat instead — and the non-linear dynamic keeps things interesting as you tinker with building more of one structure, remove a few others, to get the formula you're trying for. As of this writing Time of Exploration is in its first release with a few improvements and bugfixes, and if it's this intricate already we can't wait to find out how androdan will continue to develop it.

Any word on when this will be available for Mac phones and tablets and laptops and desktops?

We've contacted the developer, and we'll keep you posted!