Tinseltown Dreams: The 50s is a zany match-3 puzzle game from Namco with a distinctive Hollywood flare. Here among the palm trees and over-sized sunglasses you can experience the glitz, the glam, and that most remarkable magic of all, the magic of the silver screen. Everyone wants to be a part of that business that is like no business. You know, show business. Who hasn't wanted to be the starring role in a summer blockbuster, or the eccentric director of the next Oscar Award favorite? The magic cast by the silver screen is magnetic, drawing star struck people to it, and now it has pulled you in as a producer for a little known movie studio. 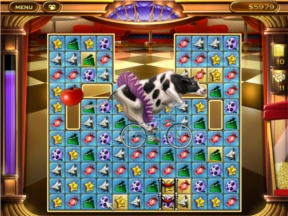 The producer may not be the most glamorous of Hollywood movers and shakers, but as producer you are one of the most important. In Tinseltown Dreams you must hire the cast and crew, finding the best talent for your limited budget. You'll have to buy sets, props, and all the behind the scenes necessities and when your masterpiece is finally finished, it'll be you picking out the name that gets painted on the "coming soon" posters. In short, without you there is no movie.

None of this comes cheap. Well, okay a few things come cheap, but most of the stuff doesn't, and you're going to need some dough. That's where the match-3 comes in. In each match-3 level, there will be a number of gold panels that are cleared by matching three or more tiles over them. Each gold tile nets you the green that you'll need to get that big named star that you've been wanting for your big sci-fi flick. Keep your eyes open, though, for there are plenty of other bonuses and even some opportunities to unlock extra props to be used on set.

With your weekly budget bursting with cash earned from your match-3 ventures, and the studio owner breathing down your neck, you are ready to make some movies and turn your little known studio into the biggest lot in Hollywood. Will you be known for your big hits, or your big bombs?

Analysis: Tinseltown Dreams is built primarily around its match-3 game which is quite well done. It sports 70 levels with a plethora of board shapes and sizes. Here the action usually remains pretty fast and snappy and there are plenty of gameplay extras to keep things running at a nice quick pace. A percolating popcorn machine occasionally spits out fountains of golden popcorn kernels worth cash, while presents reveal movie themed actions that clear large portions of the board when clicked upon. There is even a big old moo-cow that pops up now and then (what this has to do with Hollywood, I have no idea, but it's a friendly moo-cow, so there's that). 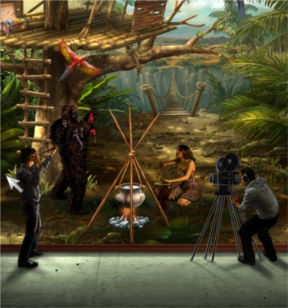 But where the true innovation for Tinseltown Dreams comes in is in the movie making aspect which does a fair job of tapping into your creative juices. No, you won't be building three-hour masterpieces, but you will be designing your own set and upgrading your crew's equipment. The quality of your hired cast and crew is directly tied into how well you perform in the match-3 portions of the game, but generally you shouldn't have much problem earning enough to afford the top tiered talent on all accounts. Meanwhile, actually putting everything in place according to your own design is quite fun, and finally putting the title on the poster can be a very satisfying experience.

There are some things that could have been improved, however. For one, the lead in to the game is deceptively disappointing. I have to admit to being put off after first loading up the game and basically being told, "Hey! Go make some movies!" Granted this style of game is not exactly known for in depth story-telling, but even so I had the distinct impression I was getting rushed.

Tinseltown's other big weakness is a lack of variety in a few key areas. For one, there is no variety in the tiles for the match-3 portions of the game. Also, while there are seven different movies you will make, the available cast and crew to choose from doesn't ever really change. It is on this last point in particular where Tinseltown could have really made a difference by either having more characters, or allowing the characters involved to grow or recede in popularity and skill over time. 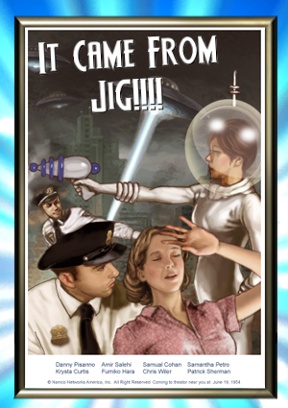 There are of course other minor tweaks that Namco could have done to make the movie making aspect of the game a more substantial part of the whole. More simulation properties could have made this a much more hybridized experience, and a little more attention to storytelling could have drawn one into the experience more effectively. This isn't much of an issue, though, because the product as is, flawed though it may be, is still quite fun and engaging. As stock match-3 gaming goes, Tinseltown sports the most personality in a game that I've played since Unwell Mel, and that's no amount of faint praise. The movie making aspect, meanwhile, is fun on its own, but also shows great promise for future installments should there be any.

Now, if only the for the next one they can skip straight to the 80s, or maybe just make a special edition John Hughes version. But I digress, without any further ado: Lights! Camera! Action! (I always wanted to say that!)

The match 3 part of tinseltown dreams is really fun. The exploding popcorn machine cracks me up every time. But, the best part is making movies! There are tons of neat props to get and you can put them wherever you want. It's kinda like the fish tank in fishdom, but you have so much more flexibility.

so whats the "It came from jig" movie like?