Do you have any regrets? Any what-ifs, missed chances, or maybes? If you do, Dr. Eva Rosalene and Dr. Neil Watts of Freebird Games' indie adventure game To The Moon might be able to help. They work for a company that developed a technology which will allow them to enter the memories of someone on their deathbed and modify those memories so that the person believes whatever they wish and are able to die happy and peacefully. Tonight, they've been called to the home of an elderly man named John, whose wish, to go to the moon, may sound odd, but should be easily fulfilled... at least until they begin digging deeper into his memories and find out the truth. Emotional, funny, creative and well-written, To The Moon at times feels like it's light on gameplay, but stellar writing and an effortlessly likable cast make this one to check out. 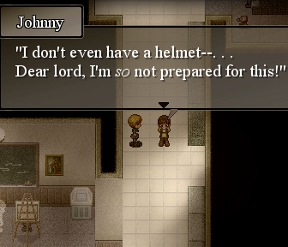 Dr. Watts and Dr. Rosalene may have bitten off more than they can chew since not even Johnny himself is entirely clear on why he wants to go there. You'll need to travel back through Johnny's memories across decades, exploring important moments in his life, and unravel the reason behind his wish, and why it never came true sooner. To move through his past, you'll need to find memory links by exploring that can unlock mementos in each scenario, which will allow you to travel back further once you've "prepared" the object... by playing a little flip puzzle, naturally. The game can be played with the mouse, clicking to interact and move around, or with the keyboard, with [WASD] or [arrow] keys for movement, and [spacebar] to interact. Right-clicking opens the menu, which lets you review notes and save the game at any time when you're not speaking with someone. 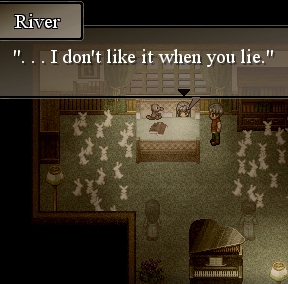 Analysis: Like a lot of people who read the description on the main site, you might feel that in playing To The Moon you're in for some touching, fluffy, Disney Channel or Lifetime Movie stuff. Make no mistake, despite the somewhat overly goofy first hour or so, the story here deals with some heavy material. Selfishness, loss, love that isn't always perfect... it's really the sort of thing you have to be in the mood to play, and if you're looking for something light and exciting, maybe with some dinosaur laser battles or light bike races, you might find To The Moon both too slow and too heavy to get into. Fortunately, the frequently funny dialogue and involving mystery serve to draw you in and keep you there, with moments of levity, tenderness, and honesty helping to carry you through the more serious bits.

The characters are expressive and animated, the environments are beautiful and well detailed without becoming cluttered, and the soundtrack is absolutely gorgeous, bringing the whole thing together in a way that makes it seem leagues more professional than its peers. If you've ever tried to create something with any RPG Maker software, then you can probably appreciate the skill, talent, and dedication that went into turning out something like this. 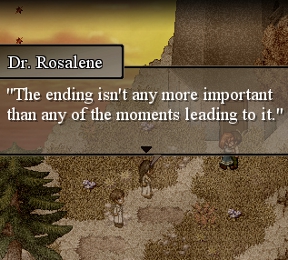 In fact, if the game has any real flaw, it's that the actual gameplay often doesn't feel as strong as the story. Rather than driving the narrative yourself, you start to feel as if all you're doing is triggering cutscenes. The flipping puzzle to unlock mementos quickly gets boring, and with little thought or action on your part required to find and gather memory links other than simply walking around, the feeling of steering our protagonists around on dolleys intensifies. It makes you wish more had been asked of you, that you'd been able to make some of the pivotal decisions our two doctors do.

By turns eerie, touching, sad, and hilarious, To The Moon is an impressively mature adventure game that deals with loss, love, regret and fulfillment in an engaging manner. A playtime of around five hours may sound short to some people, but the story here is so carefully paced that any more and it would have seemed drawn out and lost a lot of its impact. As it stands, I can personally tell you that To The Moon is one of the best indie titles I've played all year (if not ever), and came seriously close to making me tear up a few times. Sit all the way through the credits and you'll be treated to a short scene that implies we'll be seeing a lot more of Eva and Neil at some point in the future, and we may just have uncovered the tip of the iceberg in their story. In the meantime, however, we'll just have to content ourselves with this... and the knowledge that there are FREE PONY RIDES IN SPAAAAAAAAAACE!

I've played this game. And I love how the story unfolded. Yes, the gameplay was lackluster, but I believe the game isn't about that.

Also, I want to know


what River's condition was?

I just want to say that this is really an amazing game, and the review above sums it up very well (If you have ever played any of the other games created by FreeBirdGames such as Quintessence, this one is very similar in terms of overall structure). The game is sparse on actual gameplay elements for sure, but in my opinion it does not detract from the overall experience...the story as well as the music are superb and display an incredibly high level of craftsmanship for an indie game. I would highly recommend it!

To Tofunga, her condition was:

I'd agree with the review. Here's what I said in the author's forum.

5/5 - I'd highly recommend this game to anyone reading this.

"To The Moon was probably one of the best stories I've experienced, up there with others I'd consider classics such as Deus Ex and the Elder Scrolls. It played more like an interactive story than an actual game; but that's not a bad thing, just an observation, and I expected that from playing Quintessence anyway.

Some thoughts:
* The music is great, especially the main theme and 'For River'. Laura Shigihara's vocals gave me a few chills.
* The writing is good, and I did not notice any typos to correct (or if I did, I forgot about them).
* The humour worked for me and I found myself LOLing several times over the course of the game."

This was an excellent game. The gameplay was, frankly, not that important except that it encouraged exploration. Basically, it is a more interactive top-down JRPG interface of a Japanese-style visual novel game. You're really just along for the ride. It's best to think of it as mildly interactive fiction and not a game per se. Think of it as a different way to experience a story, somewhat more interactive than reading.

The story was excellent and had some plot twists. The doctors' dialogue injected some much needed humor.

why isnt it available for mac...
i waaaaant to play it!!

Really loving his so far, but can't find out what to do in act 2 after Neil gets the phone call.

me too, dunno what after the phone call.

If I remember correctly, after the phone call, you need to:

Check the other rooms of the house and talk to the mother and her children, then go back and talk to Neil again. Also I think you may have to go back to the car outside to pick something up (I can't remember specifically if you do that now or later in the game)

But I am currently stuck in the horse riding... I knocked Neil off a horse but he says I have to find the other things you get the colored balls from, and I only have 3 of the 5. I chased down River on the horse several times but nothing seems to happen, and I have run the whole map on the horse 5 times now, not finding any stuff that is helpful. I can't unmount the horse and I am really stuck in this.

I think it's worth noting that, in no real sense, is this a game. What are the gamelike elements? There are the meaningless puzzles between rounds, which seem to be there simply to claim some validation of "game-ness". There is the equivalent of a pixel hunt to unlock enough tokens to advance to the next level, although there are no real gameplay mechanics involved in this. Is it possible to lose? Are there victory conditions? Does the player have any agency, and can they get better at it? No, across the board.

Ask yourself, does this need to be a game? I'd say no. The gameplay elements of this add nothing to the experience, and in fact detract from the story. This might be an excellent interactive novel (although I didn't care for the plot, and found it manipulative and cheap), but it's not a game.

In order to get all the Memory Links (colored orbs) in the horse riding level, you need to TOUCH all the riders. It isn't enough to just chase river, you need to actually touch her (and just touching her horse isn't enough, you have to touch River herself).

The gameplay is certainly not a concern when you feel for the characters, and in my opinion it didn't make the experience I had any less interesting. I found the story to be very immersive. The plot is certainly unique and the characters behave maturely and in a very realistic way. Also, the story was built thoroughly, with detailed backgrounds of everyone, and each with a well-defined personality, which is hard to achieve.

Believe me, I have tried to write, but the narrative always end up feeling cheesy and unbelievable, which isn't the case here.

So... I'd like to ask you, in which way do you find the story manipulative or cheap?

@log5353
Of course it's a game, better than a simple novel. You are in the game, you experience the motion and every amazing moment. You discover every clue and put them together to get through the whole story. I can't see anything not suitable. For me, it's a really fantastic RPG.

Quick update for anywho who may visit this page.

To The Moon is on sale, as part of the Humble Bundle from the 8th till the 22nd (if I got that right...)