Survival is a very different thing when you compare predators to prey. Predators prefer little competition, so they aren't as keen to have their siblings hanging around. Prey, on the other hand, like safety in numbers — if only to reduce the odds that the predator comes after you. This is perhaps one reason that motivates Toki Tori to shuffle across increasingly nasty environments to only save his egg-bound brothers and sisters. Or maybe he is just an altruist. In fact, how did all the eggs get this lost in the first place? As with all of society's social ails, we have to ask: "Where are the parents?" And do they know how to get past level 3-11? 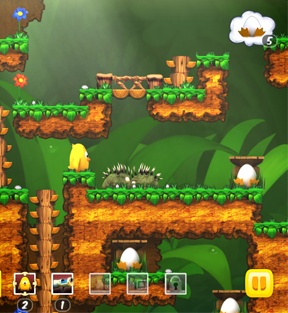 Odds are that you have heard of Toki Tori before. This reviewer hasn't, partly affirming his status as a iconoclast and mostly revealing a decade deprived of a Game Boy Color, iPhone or Wii console (nor did I play Eggbert, the game Toki Tori was originally derived from). Toki Tori first appeared on the Game Boy Color. Two Tribes, its developer, clearly enjoy resting on their laurels, because they waited eight years before releasing a new version for Wii Ware, followed a year later for the iPhone version and now, finally, the PC incarnation.

How do you play Toki Tori? As established, the little chicklet has egg-bound siblings scattered over a level. He has to collect all of them in order to move onto the next stage. At his disposal are several tools: building platforms, teleportation, dropping blocks and floating in a bubble suit. He is also able to lift and put aside a certain block type. Completing his arsenal, literally, are a few weapons: a freeze ray, vacuum gun and ghost trap.

Yet this is not a platform game — its orange chick feet are firmly wedged into the puzzle genre. A given level will equip you with a limited selection of tools and limited amounts of uses for each. So the trick is to try and reach all the eggs with what you have at hand. Cross a gap using a platform, build a makeshift staircase with blocks, etc. Sometimes it involves careful timing: for example, the ghost trap, if triggered, will open a gap to a level below, but involves baiting a normally-lethal spectral enemy. Find the right combination of actions and paths to rescue all of your siblings.

Analysis: Toki Tori is a remake of the classic GBC game, but even a casual glance at some of those levels betrays a massive overhaul. It certainly looks much nicer. Since the game does not have a scoring mechanism or any kind of timer (unlike the GBC version), its virtues lie in how tough the puzzles are. And they do get challenging: quite a few solutions required some lateral thinking, especially when the obvious path turned out to be a red herring. Jump into the optional Hard levels and you really have your egg-rescuing cut out for you. 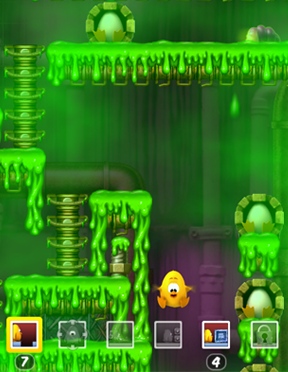 But it's still a path-of-least-resistance experience. Toki Tori doesn't want you to suffer; it wants you to have fun. So Two Tribes added an unlimited rewind feature that lets you take a few steps back and avoid a mistake you had just made, or retrace your steps right back to the start. This both encourages experimentation and makes accidental (or stupid) deaths less frustrating. The main character will also indicate if you really screwed up by taking up a sad, sulking posture. No game is complete without its star and the titular hero is a charming little chap with a lot of personality. You come to enjoy his little waddling animations, the stuff he starts doing when he is idle, the loose swaying when you make him dizzy.

Adding to the ease of use are the controls. You can use the keyboard, but the game is entirely playable with your mouse.. In fact, this is by far the superior way to do things. Move the little bird, activate weapons and look around the level all while holding a cup of coffee in your other hand. It adds to the relaxed mood of the game. If Two Tribes aimed to turn a frustrating puzzle game into a surprisingly zen experience, they have nailed it.

On the one hand it's the same game from 2000, though with new levels and some refinement to the formula. On the other, all that refinement was like cutting and polishing a rough diamond. It's also nice to experience a puzzle game that does its own thing and sidesteps the legions of clones that seem to clog up the genre. Clones are nice — a good puzzle game is a good puzzle game - but something entirely fresh is even better. Especially when it combines the charm and polish that culminates into Toki Tori.

Grab your PC/Mac copy of Toki Tori below, it's inexpensive and is available from several digital download services. You can also find it on Wii Ware as well as Toki Tori and Toki Tori Lite on the iTunes App Store.

Windows:
Download the demo (demo available only through Steam) Get the full version (several purchasing options)

Would reccomend this game to any puzzle/casual loving gamer. Very cute game, well thought out, interesting puzzles and a highly enjoyable game.