Folks who like hidden object/adventure hybrids fall into one of two camps: those who like the "traditional" hidden object scenes with lists of things to find, and those who like more context-sensitive actions, finding only the things (or pieces of the things) that are needed to propel the action. Well, Artogon has raised the stakes with Treasure Seekers: Follow the Ghosts and their point seems to be... why not enjoy both? 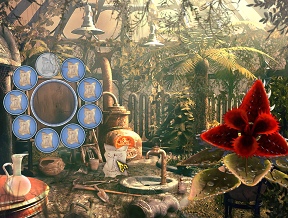 Treasure Seekers: Follow the Ghosts is the third in the Treasure Seekers series. Yes, Nelly and Tom, those investigating siblings, are back to solve yet another mystery, this one involving a priceless stolen gem and a lot of supernatural activity. Together and at home (for once), the two notice that simultaneously with the aforesaid jewel being grabbed in a daring robbery, a ghost appears at the home of the family who owned the gem. Are they linked? Well, Tom thinks so, so why not investigate?

Their initial investigation gives our intrepid heroes the reputation as investigators of the paranormal, and before you know it they are off, separately and together, traveling around the globe to discover what is causing such havoc with the supernatural. Nelly is still calm and methodical, Tom is still a mechanical genius and a bit of a doofus, and between them they soon realize that an old enemy has resurfaced and is behind it all. Can they stop the evil mastermind before his plans come to fruition? Play to find out. 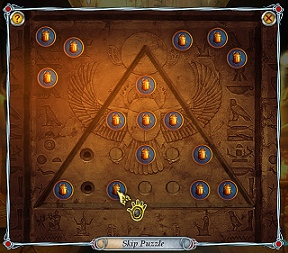 For the most part the interface is the one that has made Artogon's games so unique: click on an area that needs solving and a circle pops up showing what items need to be gathered to complete that particular task. A changing cursor alerts the player to things that can be picked up, examined, manipulated, or spoken to, as well as a cursor that indicates areas that can be traveled to. Tasks can be performed simultaneously or concurrently depending upon the area. However, in addition to the basic dynamic that is so familiar with Artogon's other games, a new dynamic has been added: classic, list-driven hidden object scenes. As you play through a location you will find not only the classic circle dynamic but also mini-games, puzzles, and the aforementioned hidden object scenes, all of which must be solved to discover what is causing the local problem.

Hints are on a refilling timer that refills either very quickly (in casual mode) or just fairly quickly (in advanced mode). The mini-games and puzzles are also on a skip timer; wait long enough and you can bypass them if they become too difficult. A handy running tally of the necessary tasks that helps the player keep track of everything that needs to be done is welcome, especially in the later chapters where the tasks can number in the dozens. 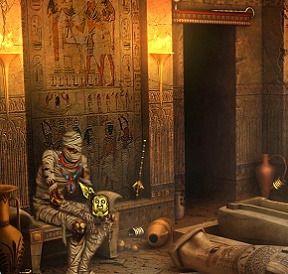 Analysis: The Treasure Seekers series are some of the loveliest, most entertaining hybrids out there and Treasure Seekers: Follow the Ghosts seeks to expand and enhance the formula. With a choice of modes (casual and advanced), and such a variety of problem solving, hidden objects, and mini-games, Artogon has created casual gameplay that will satisfy folks on all areas of the spectrum, with fun and challenging puzzles that will appeal to a wide variety of gamers. Better yet, Artogon seems to be going against the tide of the ever shrinking sequel. Treasure Seekers: Follow the Ghosts is not longer than Treasure Seekers II but it is no shorter either, which, these days, is a minor miracle.

The artwork is, as always, gorgeous to look at. Hyper real and luminous, the backgrounds perfectly mirror the time and location of each of the chapters. Music and sound effects that are by turn lively and spooky round out the experience. But the best part is the characters, especially the dead, undead, and nearly dead folks whose rest has been disturbed, which has made most of them both depressed and a little cranky. Half of the fun is meeting these nearly or dearly departed who just want to be left alone and have no idea why some lunatic keeps insisting on messing with their places of rest.

Although some might not like the addition of the classic hidden object scenes, they are not numerous enough or obtrusive enough to slow down the momentum of the story, and in fact add enough to the gameplay to create an environment that will appeal to everyone who likes the adventure/hidden object hybrids, and perhaps even those who don't. So will Nelly and Tom save the day? Will the evil mastermind's plan succeed? What do you think? Play and find out!

Mini Game to Activate the Portal

Mini Game To Discover The Robber

You Have Completed All Your Assignments And Removed All The Anomalies.

Special thanks to Jazz for this wonderful walkthrough!

Extra special thanks to Jazz for the walkthrough of the bonus chapter from the Collector's Edition!

Well, this came out some time ago. I bought the 1st 2 games and liked them a lot. As with most sequels, they morph a bit from game to game. I bought this one as well and enjoyed it. I think the 2nd one is my favorite out of the 3, though.

Mini Game to Activate the Portal

Mini Game To Discover The Robber

You Have Completed All Your Assignments And Removed All The Anomalies.

Special thanks to Jazz for this wonderful walkthrough!

Extra special thanks to Jazz for the walkthrough of the bonus chapter from the Collector's Edition!