Treasure Seekers:
The Time Has Come

More Treasure Seekers! The latest installment in the hidden object series, Treasure Seekers: The Time Has Come, preserves the story and layout of previous games and features a slightly older Nelly and Tom. Not only have the characters grown up, but Artogon seems to have matured bits of the gameplay as well, featuring a better-crafted series of puzzles and more interesting locations to search through. 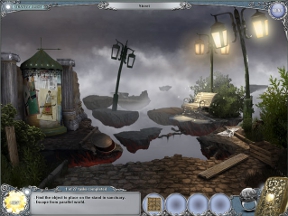 Avoiding some of the plot traps many hidden object games fall victim to, Treasure Seekers 4 stays away from haunted mansion/mental institution territory and instead opts for a time-traveling adventure. The ancient Mayans predicted the end of the world would happen in 2012, and in this game, you can help prevent that from happening. Switch between two time periods so you can investigate events and affect things in the future from the past, all by using a magical ring.

Gameplay is traditional Treasure Seekers fare, with Artogon's lovely "container items" filling out a good portion of the puzzles. One of the first you'll encounter is a simple generator needed to power some lights. In order to get it to work, you must find half a dozen parts scattered throughout the scene. Click on the generator and a round menu opens up with each item displayed as a slightly blurry icon. Find the item, drag it to the generator, and you've filled in a slot! It's simple, it's intuitive, and it looks great in the game.

Apart from servicing container items, the rest of the puzzles in Treasure Seekers focus on solving basic tasks using a few items from nearby areas. You'll need to travel a bit in order to find what you need (especially later in the game), but a refilling hint meter ensures you never get stuck, and small white "sparkles" appear on objects that are important for your search. 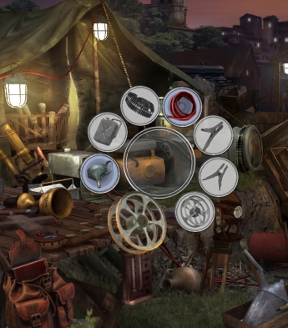 Analysis: The Treasure Seekers series has become a staple hidden object game since its introduction a few years ago. Not only are the container items interesting, but the games focus on a pair of siblings and their adventures, telling a good story that shows surprising continuity between sequels. The villain and some of the plot points come across as a bit contrived (gotta appreciate Totenkraft's sense of style, though!), but the whole thing is put together so well, you never really mind.

As is becoming the practice of many modern hidden object games, Treasure Seekers: The Time Has Come features both casual and standard modes of play. The former features a faster hint timer and the above mentioned white sparkles, while the latter is a bit more difficult. Casual mode offers very little challenge, but it's great if you're only interested in kicking back and having a good time.

A great follow-up to the first Treasure Seekers games, with Artogon's seasoned hidden object/adventure hands creating an experience worthy of any casual gamer!

A Collector's Edition is also available and it includes a battery of extras, including wallpapers, a strategy guide, and concept art. Best of all, a bonus adventure is available to play, and it's actually a great addition to the game! Remember that Big Fish Game Club Members pay only $13.99 for Collector's Editions (or 2 club credits), and collector's editions count 3 card punches of 6 total needed for a free game.

i can play game in the temple, whit bowl and water,whay is that...I ned help...please

Marlen,
You need to put out the smoke when you first enter the Temple.

There is a goblet on the right. Pick it up and click on the bowl to fill the goblet with water.
Take the lens from the bowl after the water is gone.
There are two containers that are smoking to the right and left of the bowl. Put the goblet on each of them and the smoke will go away and the Temple will become brighter.

In Jerusalem: how can I look into the bowl and grab the lens. I don't know how, so I can't put away the smoke

Marlen, can you grab the water and lens from the central bowl in smoky temple, 'cause in my case the bowl is not active place in my game. I can't touch or examine it.Do you want to say you where able to do it?

Everybody who is having trouble with the bowl in the Temple in Chapter 2 needs BFG's update of the game that fixed the problem.

can somebody give a download address of the update? thank you

played and liked the game but just couldn't use the invisible mirror in the room where you have to eavesdrop. after placing the eyes in the mask and finished eavesdropping, the mirror just won't show up. it was clicked but no appearance of the mirror. am i missing something or is this a real glitch. it's a waste not to finish the game because i enjoyed it so much together with my children. pls. help...thanks a lot!

Elaine -
Try clicking on the levers to open the door to find out the mechanism is broken.

I have collected everything in the temple except the cross. The hint keeps showing the coin by the speaker but it will not allow me to place it to finish moving the brick.

Sandy -
Check the screenshot in the first Scaffolding Hidden Object Scene in the walkthrough above.

The sledgehammer is marked above the toolbox where the brush is located. You might need to close the lid of the toolbox to see it.

Make sure you have the latest version of the game. There was an update to fix that issue.

Can you explain a bit more so I can get a better sense of where you are. Which items do you have in your possession? Also, which minigames/object searches have you recently completed?

If you haven't already, take another look at the walkthrough, which is posted (with spoiler tags) at the top of this comments section, just below the game review. The tomatoes can be gathered from "Square 1932" after you have completed the Idol Head mini-game.