Trial of the Clone

"The first emotion you feel in your life is disappointment. Interestingly, it'll also be your last emotion, and about 80% of the emotions in between." So begins your existence as a clone in Zach Weinersmith's new gamebook Trial of the Clone. Developed by Tin Man Games, written by the mind behind the webcomic Saturday Morning Breakfast Cereal (17+) and narrated by Wil Wheaton(!), Trial of the Clone combines a choose-your-own-adventure story with RPG elements, all the while poking fun at all things sci-fi. 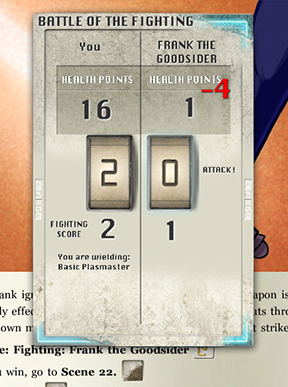 After your rather unceremonious birth, you're sent to the temple of the Silene Monks, where you choose whether to be a medic, a warrior or an engineer. From there, it's up to you to make the right choices to fulfill your destiny and, most crucially, not die. But Trial of the Clone is more than a simple choose-your-own-adventure. Along the way you'll gain stat points, weapons and items, which you can keep track of via a built-in D&D-style Adventure Sheet. These come to play in battles which pop up occasionally and affect the course of the story. Battles are pretty simple: You deal damage to your opponent based on your given stats plus a random number from 0 to 3, and then your opponent does the same — the last one standing wins. Loss in a battle doesn't necessarily mean death; it may just mean being relocated to a different department (say, engineering, where physical strength, ability and charisma are less in demand).

There are some other neat little features which enhance the gamebook experience, not the least of which is the soulful voice of the real Wil Wheaton. You can turn on the ability to cheat, allowing you to jump around and experience all the scenarios regardless of your choices, just like you did when you were a child. (Don't lie; we all did it.) There are also some minigames, plenty of illustrations and did we mention the dulcet tones of Wil Wheaton?

If you know Zach or SMBC, then it should come as no surprise that Trial of the Clone is frakking hilarious. The tale of a clone — a mass-produced person with no cause to call himself special — trying to find his place in a cold, futuristic world is an engaging backdrop in itself, but Zach's humor turns this into a raucous and unexpected romp. The story is not astonishingly deep, but it is entertaining all the way through. The geekiness and raunchy humor mean this is certainly not for everyone, but fans of sci-fi culture and the occasional (or not-so-occasional) low-brow chuckle will find plenty to love and laugh at here.

Trial of the Clone
(Android)

Trial of the Clone
(Android)