Trinklit Supreme wouldn't catch your eye if it were in a crowded room. Actually, since it's sort of a matching puzzle game, it is in a crowded room, and there's still no reason it would draw your attention. But then you notice it's from Funkitron, the group responsible for most of those Slingo games you've seen around, and suddenly Trinklit's got a leg or two to stand on. With its flat presentation and somewhat dated interface, you'd never suspect that lurking just beneath this game's surface is a beast of an addiction machine waiting to grab you and pull you under. 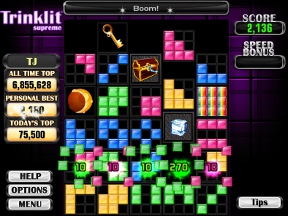 Trinklit Supreme is a "shape and maybe color" matching game that takes place on a grid. Before you is a massive 5x6 grid where each space is occupied by some sort of icon, usually a smaller 3x3 grid of colored blocks. Your goal is to fit these block pieces together so they form a completed whole, thus disappearing from the grid and allowing more things to fall. Matching shapes alone is fine, but get the colors together and you'll get a bonus. Do it quickly and you'll get even more points!

And that's how Trinklit starts off, but it's only the beginning of what the game has to offer. Front and center of the Trinklit experience are unlockable power-ups, special equippable abilities you earn through normal gameplay that subtly or drastically alter the core game. For example, if fitting simple shapes together sounds a bit drab, your very first power-up is called "Specials" and it produces unique picture icons like ice blocks, torches, keys, rainbows, stars, and so on. By themselves, these things merely get in the way. If you have a key and a treasure chest on the board at the same time, though, match them together for something nice.

After playing a few rounds of the main game, making some matches and hopefully pulling off a few stunning tricks, you'll get more abilities to equip along with more slots to equip them in. There are 16 power-ups in all, ranging from the simple to the complex, the crazy to the down right awesome. Some of them introduce mini-games and new game modes altogether! You can combine these new "rules" to craft a game vastly different than the block matching title you started off with. Whatever powers float your polyomino boat! 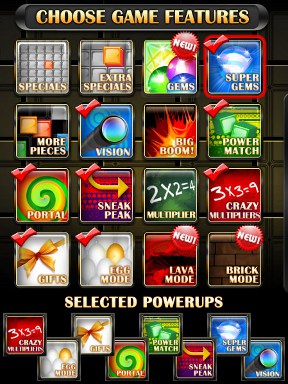 Analysis: Just as the Achievement Unlocked browser games capitalized on the secret bonuses games love to grant us these days, Trinklit Supreme is all about the little trophies you earn as you play. Really, the gameplay is nothing more than a simple grid where you swap things back and forth. But when you add the power-ups into the mix, you get something extraordinarily different. It's difficult to convey just how much this game evolves as you play, and how supremely satisfying it is to essentially create your own puzzle experience using the unlockable abilities.

Another focus of Trinklit Supreme is high scores. You can check out your own personal bests as well as the all-time top scores for each level right from the sidebar. Then there's the daily challenges which urge you to compete with the other invisible Trinklit players for the biggest numbers. It's an optional part of the game, but great if you love going for the high score, and it adds a bit of an incentive to keep coming back even after you've unlocked every power, star, and award in the game.

Now for the bad news: Trinklit Supreme takes some time to reach its full potential. Unlocking new abilities doesn't happen immediately, you've got to work for them, and this will take a few hours to achieve. The rate at which game-changing abilities are given to you is perfect, though, feeding you just enough newness at each moment to keep you motivated for more. But with a game of this nature, there's no getting around the fact that you'll have to do some moderate grinding.

It doesn't look special, it may not seem special, but Trinklit Supreme really does something great for puzzle fans. If getting achievements and crafting your own game one power-up at a time sounds even remotely interesting, give this little gem a whirl. It's a wonderful pick-up-and-play title!