Tulula: Legend Of A Volcano

In the age old "does a super hero beget a super villain" debate, one has to ponder if the same counts for evil spirits and chosen ones. Let's take, for example, the opening scene in Tulula: Legend Of A Volcano, from Intenium. Here you are, standing in a cave, a shaman named Taboo telling you that everyone in the world has been frozen by an evil spirit's spell and clearly you, not being frozen, must be the chosen one. Thus you set upon a quest of restoring the tribe totem, inconveniently smashed to bits by the evil spirit and spread across several locations. It's up to you to visit each exotic spot and get those pieces together in this absolutely gorgeous hidden object adventure hybrid, with an assortment of hidden objects and puzzles standing in your way. 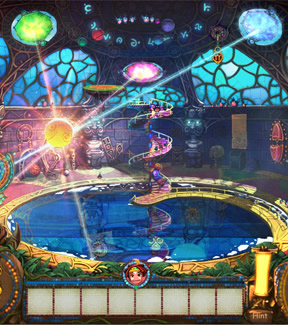 Every area, or level, in Tulula comprises of two or three screens and two main quests: collect all the totem pieces and get the portal going. To do this you need to solve various situations in the areas: getting a lift to work, finding a boat or rigging a hot air balloon. If that sounds mundane, you also get to extinguish a volcano, harness the power of dark matter and give a chief happy dreams. Tulula is a surreal ensemble of fantasy, technology and eccentricity. Even in the world of hidden object games in particular, this title stands apart with its decadently fantastic locations.

Despite the name, "casual" is anything but, especially if you descend into the more demanding stuff Big Fish dishes up. Serious hidden object game fans and Holmesian puzzle addicts can get their fixes from quite a selection in its catalog. But these are not exactly the games you use to lure people into the whole scene. Enter Tulula, an experience that is perfect for newcomers or kids. With colorful art and an interesting mix of gameplay styles, it's a perfect primer to the world of 'casual' games. 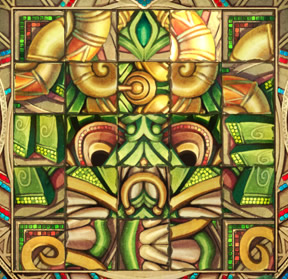 Casual to its core, Tulula is not only beautiful to behold, it is also mostly a light and easy romp. It uses several familiar systems: finding pieces to construct something, solving puzzles to access items (and the reliable regulars at that: sliding puzzles, repeat-the-tune, etc.), using items for specific tasks, hidden object sequences, even a solid hint system – it's all there. As the story progresses, the difficulty rises noticeably, but more along the lines of strange things to find and some pedantic puzzle designs. Fortunately the hint system is extremely forgiving.

Things you don't often see in this genre hybrid are distinct levels with score summaries, achievements (in the form of medals) and statistics that level up your character. Every time you complete a section, you are scored accordingly (penalizing for skipping puzzles). This score hands you 'talents', currency you use to restore your village destroyed by the evil spirit. In another concession to newcomers, usable items and areas unlock only when you need use them, so there are no items confusing you or cluttering the inventory. 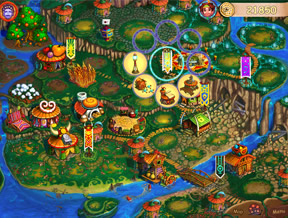 And that's why it's an ideal stepping stone – a great way to give someone a full run of the casual puzzle game ensemble of tricks. If you can get them hooked now, they might return the favor and buy you the new Mystery Case Files game for Christmas. Tulula may not be for seasoned pros, but it's great for the casual gamer, young or old. Veterans won't be very challenged, but sometimes a challenge isn't what you're looking for in the realm of casual gameplay. A gorgeous game that is fun to play from beginning to end, and one that is quite unique even if it does stick very close to a formula that works.

Inside the Temple. Downstairs

Village in the Trees

Click it to see the silhouettes in the container.

Village on the Water

The Island of Loss

House of the Key Guard

Heart of the Vulcano

Cave of the Warlock

I like the game, it is funny warm and creative.
It is not the most challenging game on the market, but sometimes it is nice to simply play and enjoy.

Ooh, what a nice game!
*sees collector's edition sign*
WHAT THE...!?

[Sorry, that was a typo and has been fixed. There is no collector's edition available for this game. -Jay]

Inside the Temple. Downstairs

Village in the Trees

Click it to see the silhouettes in the container.

Village on the Water

The Island of Loss

House of the Key Guard

Heart of the Vulcano

Cave of the Warlock

I need help scaring the fish. I have been trying to use the crowbar to remove the cupacabra, but I can't get it to work. Any ideas of what I am doing wrong? Please help!

I solved the game, but was unable to get 4 of the achievements. twitchicus, great twitchicus, lazious, discoverius. Any idea on how I get those ones?

Tulula is one of the most gorgeous games you will ever find. The artwork is unique, amusing and amazingly clever---you hardly know where to look there are so many eye-tempting treats on every screen.

Things move and dance in unusual ways as well. There are comments that say it may not be for the seasoned "pro", but how many of us qualify for that? Also, I have plenty of games started but deleted because I got stuck---and after 45 minutes of trying to open a sewer or find a key or a rope, where's the fun?

It's also no fun when you have to consult the walk-through every few moves because the clues are so "pro-friendly" but leave the rest of us bored to tears.

This game is just plain fun. The artwork is astonishing and there is plenty of interest, I don't think this is for someone who has never played a game before. There was plenty "confusion" and intrigue for me. I had a great time and thank the team for all their hard work. When do I get to rescue the fair maiden? Soon, I hope. A huge thank you!

1,375 Views
0 Comments
chrpa— Jayisgames needs your help to continue providing quality content. Click for details Welcome to Mobile Monday! Goro Sato's room is not only stylish. It's also magical and you can travel in time there - unfortunately, you don't get a...  ...

4,055 Views
6 Comments
chrpa— Jayisgames needs your help to continue providing quality content. Click for details After a tiring long day - it's not fun to raise five kids - Mother Mouse finally put her offsprings to bed and left the room for...  ...

How to Max Reputation in WoW TBC Classic

1,312 Views
0 Comments
jayisgames.com— Don't we all just want to be admired in the eyes of the public? So do your characters in WoW TBC Classic. They just want to be heroes and live a lavish life, is that too much to ask...  ...

2,191 Views
0 Comments
chrpa— Jayisgames needs your help to continue providing quality content. Click for details Welcome to Weekday Puzzle! Kultisti is back in a short time indeed - this time you need to help to his skeleton magician. Toombler's puzzler plays with...  ...