When I was little, my brother and I used to race toy cars. We'd make tracks by laying down crayons as outlines, and we deliberately chose bumpy surfaces to make the races more interesting. If you did something similar when you were a kid, Turbo Rally, a new racing game by TurboNuke, should instantly take you back to those times. 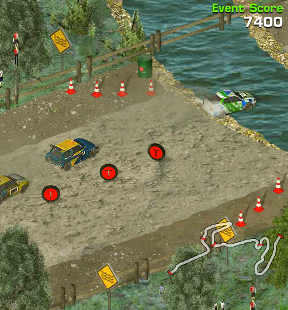 Turbo Rally consists of a series of races around the world. Each one offers you three different time limits, which earn you one, two or three stars. You must get at least one star to be able to unlock the next race. Use the [WASD] or [arrow] keys to drive, [C] or [M] for the handbrake, and [X] or [N] to activate boosts and away we go! The tracks usually alternate between asphalt and gravel and have obstacles like traffic cones and barrels to slow you down. There are also rows of red tokens which add to your score and boost meter, as well as single orange tokens, which give you a short, powerful boost. Your score translates to prize money you can use to upgrade existing cars or to buy new ones. The good news is that you get some cash even if you fail an event, so you can make up for your woeful inadequacy by getting helpful upgrades.

The controls behave quite well for a game of this calibre. The difference between surfaces is tangible, and the handbrake really comes in handy for keeping your car under control. The graphics won't knock your socks off, but it's tiny colourful 3D cars in a realistic environment, and what more could you ask for in a flash game? The tracks are challenging, and there are lots of achievements to earn. Even if you aren't a fan of rally races, give Turbo Rally a chance, but be warned – once you start, you won't want to stop.

This game is really hard.

Especially the fifth track, Finland. Incredibly narrow track, slippery surface and constructed entirely from a series of hairpin turns one after another. Even the AI cars seem to have a hard time getting round that one.

I'm about to max out my third car and I still can't get within two seconds of passing Finland.

I'm a sucker for driving games but this one is coming close to just not being fun any more. If that's just the fifth track in continent two, what are the other four continental sections going to be like?

Is there something I've missed?

Ok, there is something I missed.

There are 'secret' cut-throughs on some tracks. Definitely on Canada and Finland, possibly on others also. I couldn't get more than 1 star on Canada without using it. I still can't complete Finland and have now given up trying, but I'll bet that using the cut-through is the way to do it.