Twisted Lands: Origin starts with a bang, and it never lets up. The third game in the Twisted Lands series, the story goes back to the beginning and tells the tale of the terror that stormed the island of Tormente. It's an intense casual adventure whose focus is strongly centered on story and hidden object scenes, creating an interesting sort of action/puzzle duality that keeps you moving along at a rapid pace. 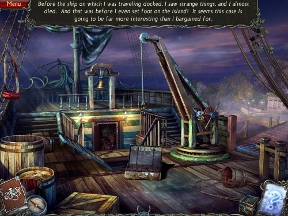 Things start off with a chase scene through the forest where a bunch of monster-looking things are after you. That's just great! Oh, and what? The crew of your ship is missing? Probably not a big deal. Boats pretty much operate themselves these days, right? Oh, well now there's something. A specter of a girl following the ship just under the water. And the entire port town is populated by ghosts? That's... that's just great! But that's not why you're here. Joaquin Huerta has asked you to search for her daughter, Teresa. So despite the ghosts, crazy storms, and evil guard dogs, you've got a job to do, detective.

Structured more like Twisted Lands: Insomniac, Origin sets you loose to explore small areas with new places blocked by puzzles you'll need to solve. Hidden object scenes are most often the manner in which you'll proceed, solving a few of them to gain key items necessary to remove obstacles in your path. The formula is very straightforward, with little room to get lost. And if you do, a friendly hint system is always ready to point you in the right direction. 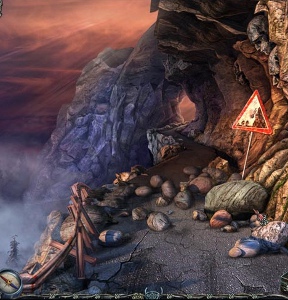 Analysis: It's always difficult to pull off a successful trilogy of games, but Alawar Stargaze knows how to keep your eyes glued to the screen. Through Twisted Lands: Origin's interesting mix of action storytelling and hidden object scenes, there's barely a moment to catch your breath. It's one of the more cinematic hidden object games out there, as even the music sounds like it was pulled from an action flick.

Twisted Lands 3 does suffer from some of the traps many hidden object games fall for, including subject puzzles that require just the right item to solve, even though half the items you just found would logically serve just as well. You'll never get stuck or be confused as to what to do, your mind will just wonder "Why can't I use the hammer I just saw?". The voice acting is also rather underwhelming, though it's passable for a casual adventure game.

Twisted Lands: Origin is a great exercise in exciting storytelling, something rarely seen in modern adventure/hidden object hybrids. Best of all, you don't need a thorough knowledge of the previous games to have a good time, just hop on board and get ready for a ride.

Chapter 1: Arrival on the Island

Stairs at the Top of the Lift and Fountain

Cell and Outside Police Station

Climb the Tower and Catacomb Entrance

Screenshot
Watch the epilogue to your stay in the Twisted Lands.

Chapter 1: Arrival on the Island

Stairs at the Top of the Lift and Fountain

Cell and Outside Police Station

Climb the Tower and Catacomb Entrance

Screenshot
Watch the epilogue to your stay in the Twisted Lands.