Many years after the war between humans and monsters that saw the monsters imprisoned beneath the earth, a small child (you!) climbs a mountain, only to stumble and find themselves lost in a vast and bizarre underground world whose rules they know nothing of. So begins Toby Fox's surreal indie RPG Undertale, where you quickly discover that the Underground isn't as harmless and friendly as it seems. Patient and kind Toriel takes you under her proverbial wing, teaching you how to solve the many puzzles before you and how to resolve conflicts, but even her warm maternal care isn't a substitute for returning home. Will you be able to brave the world beyond her care where Asgore waits? Undertale delivers a finely crafted adventure that is at once funny, ridiculous, heartwarming, creepy, and not a little weird. And, yes, you can date a skeleton, if you want. And, yes, there are several dogs. But you'll also star in a taping of a psychotic robot's cooking show. Make friends with a socially awkward dinosaur. Open a dog couple's mind to alternate petting. Get a pair of bulky bro guards to be honest about their feelings. And much, much more. Undertale is a powerhouse of an indie RPG that should not be missed. 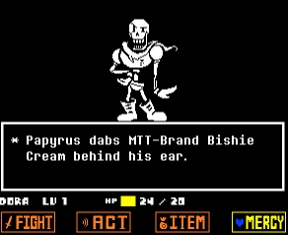 While Undertale has combat in the traditional RPG sense, it also gives you the option to resolve every single conflict peacefully. Choose non-violent actions like talking, compliments, and so forth, and eventually your foe will decide not to fight you, which will allow you to show mercy on them and win the encounter. Some enemies will need special actions or more determination than others, but hey, if you make a mistake, you can just reload the game and try again, right? When enemies attack, you'll actually get to maneuver your little heart icon around a small area to try to avoid taking damage in bullet-hell style sequences of various types. What you won't find, however, is any grinding whatsoever despite there being random encounters, and if you choose to play the game a different way in subsequent playthroughs, you'll find a substantially different experience depending on how you approach each choice and encounter. You can save your game at the glowing points of light that also restore your health, but it's not all fighting/not fighting. Undertale also places a heavy emphasis on puzzle solving, so you can expect to be wearing your thinking hat for a lot of the game, too. 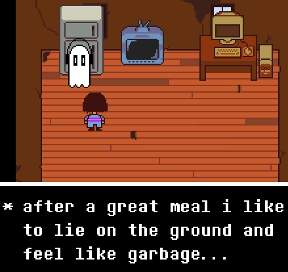 Undertale's battle system allows for a lot of surprising variety. You might have to lure and dodge projectiles to hit another target, you might find your heart avatar only able to leap instead of fly freely, or partake in a murderous robot's unfair quiz show, or you just might need to figure out the specific order of unique actions to appease an enemy. It keeps things feeling fresh throughout Undertale's run, no small feat in an RPG, and makes every encounter feel unique and challenging. The downside is that some of the "boss" encounters drag on just a liiiiiitle too long, making replaying them a chore if you get whacked, though surprisingly the game knows when to cut corners on repeating dialogue if you have to replay a battle, and to be generous with save points at the worst of it. The sheer creativity more than makes up for this, especially given how much replay value you'll find in alternate playstyles. Undertale rewards exploration and experimentation, and getting a "perfect" run will take a lot of both. Not that you'll mind coming back to it again and again, and even just playing the demo, which we loved enough to review even before the successful Kickstarter, is going to give you just the barest taste of what lies in store. 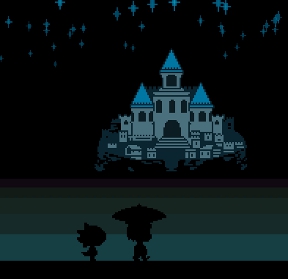 Undertale could teach a masterclass in how to evoke strong emotion in players. Small details, like the way Toriel smiles anxiously as she leads you by the hand or gently tousles your hair, endear her to you almost immediately, while the conspiratorial smirk of another character can make your skin crawl. While a lot of people will compare it to Earthbound, however, it's actually closer to Earthbound's Magicant... it's almost aggressively weird, like using the cup noodles during battle, and extremely random in places, though rarely without charm or meaning. There's a serious story behind all the cute creatures and goofy gags, and in some cases, some really creepy stuff too, and Toby Fox folds it so effortlessly with the surreal bits that it makes the darker moments hit all the harder. Depending on which ending you get, the game pulls out some seriously shocking tricks, and suffice it to say all your actions do matter in a big way. It doesn't hurt that the soundtrack is absolutely fantastic (try not to tap along to Muffet's theme, I dare you), and its smart gameplay and evocative storytelling is just the cherry on top. Undertale is a resounding success from virtually every aspect, and deserves to be referred to in the same breath as other classics of the genre. It pulls no punches, but instead offers a clever, imaginative, and creative experience you'll remember for a long time to come. Highly recommended.

The pacifist outcome is absolutely excellent. I loved it, especially since I could never tell when the game was truly going to end.

There is a lot of content - I think according to Steam I've spent about 14 hours on its so far, but a lot of those hours, I like to believe, come from just listening to the game in the background. Of course, I also bought the game's soundtrack, and can listen to the music there as well.

Is there any purpose to the Mysterious Place (not sure what the name is, but that's the track that plays in that area)? It's the path you have to go downwards where you fight the decorated deer, and it veers up. There's a purple door, but whenever I interact with it, it just says that "it's a door".

Also, having poked around the Steam discussions for the mass genocide ending, I'm not sure if I'm going to ever break out of pacifist mode for the time being. *shudders*

Hi there! Glad you enjoyed the game! :)

To open the door, you need to be able to dodge all the names in the Special Thanks setting of the credits.

It's just a cute little dev easter egg room where you can talk to the creator as a dog and whatnot!

SUCH a lovely game! i definitely recommend buying it. it's worth $10 and then some