Auria Edith was just your average smart-mouthed university student, unsure of what she wanted to do with her life and coasting along... right up until the night she died. For most stories, that would be the end of things, but for Auria's, it's just the beginning. In this short first installment of Project BC's free indie RPG Vacant Sky: Act 1, there's a war going on and Auria's unexpected death and resurrection is about to put her right in the middle of it whether she likes it or not. Packed with humour, darkness, and adventure by turns, it's an ambitious modern fantasy adventure that fans of classic turn-based RPGs will want to check out right away. 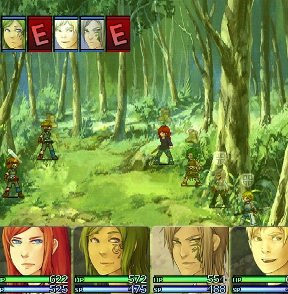 In a lot of ways, Vacant Sky plays like a traditional console-era RPG. Move around with the [arrow] keys, and interact/make selections with the [spacebar]. Battle is turn-based, but fortunately for foes of random encounters, you can see and avoid all enemies on the map as floating black spots of... evil... cotton candy, I guess? While you'll find familiar attack options, you can also set your "reaction", which can, for instance, change your character's stance from relying on their speed for dodging or their defense for, uh, defending. After fights, simply nip off to the nearest save point to restore your hit points and spell points. However, while you'll still level up by earning experience points, Vacant Sky allows you a bit of freedom by giving Auria skill points you can allocate to stats, and also granting you the ability to choose what special attacks/passive skills you want to learn. If you just want to enjoy the story, you can set the difficulty to something easy when you first start playing. Of course, in my day, when we played an RPG we had to grind 99 levels, uphill, barefoot, in a snowstorm, just to scratch the final boss, you whippersnappers, consarn it, where's my cane... 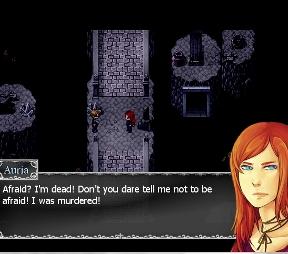 Analysis: Though it takes a while for the game to get around to filling you in on the details, Vacant Sky has a surprisingly complex plot. It balances moments of surprising warmth, humour, and light-heartedness with some genuinely grim and frightening stuff. Initially, Auria can across as Mary Sue-ish (and a bit of a jerk), though the more time you spend with her the more you'll grow to recognise where the mask she wears ends and the real girl begins. (More or less. She's still a bit of a Sue.) Unfortunately, certain bits come across as either rushed or cut, particularly the decision not to show any of the weeks Auria spends traveling with her companions initially, which seems odd when you think it would be prime opportunity for some character development on all sides. The game as a whole is extremely lovingly detailed, however. So much detail has been put into everything from the soundtrack to the cinematics that seems like every effort has been made to make the game look and feel polished and professional from every angle.

The flaws to be found in the game are largely those shared by other classic-styled RPGs. Fights feel slow, especially when your enemies can use the "dodge" reaction too, and without a "dash" option to speed up movement all the back-and-forth involved in the sidequests winds up feeling like it takes far longer than it should. Additionally, the game offers you a lot of jerk/not jerk style choices in dialogue and in minor actions throughout, but if they have any influence on aspects of Auria's personality as reflected on the status screen, they weren't yet implemented in this first installment to a noticeable extent. Vacant Sky: Act 1 is clearly a labour of love and has a considerable amount of talent behind it, which should leave you excited for the upcoming second and third installments. Especially since Act 1 is a bit on the short side (the party's level is capped at 5), but as a first taste of what's to come, it's a compelling play. It has a massive amount of potential, and I, for one, can't wait to see how Vacant Sky lives up to it.

I feel absolutely stupid for writing this, but I'm stuck at the very beginning, in the underground complex with Sandarga and Weapon (and the third masked guy). I've killed everyone, and now I'm roaming between the first and the third floors with the elevator, and I can't find an exit. Do I have to do something special?

Never mind, got it.
This game looks very promising, and the soundtrack is fantastic. I hope it's not short...

This looks so cool--plans for Mac release?

Well, a bit blown away

I got a little lost at the ending, I mean wasn't it Blaise that killed her in the first place

and is there an alternative ending... tried a few times to change it!

I wonder if the next update will explain why she murdered her father. At the beginning she talks about not being able to forgive him, but forgive him for what? Also I hope it's explained HOW she killed him- the house looks like it exploded into tiny bits!

I think Blaise is a fanatic in terms of Virad- shooting first and asking questions later. He maneuvers for a good shot then shoots, like when he got her near the water or at the end when he pretended to acquiesce to the Virad and then shoots. I was surprised that he didn't say "Hey, haven't I shot you before?" But on the other hand he has bigger problems like the Virad controlling the maximum security facility.

FYI, although I'm sure this wasn't the case when this was reviewed, the page for the Windows version now tries to install malware (one of those "fake" virus scanners).