Vampire Volleyball is a simple player vs. player arcade game by Retro64 (the creator of Rune Raiders) that pits one vampire against another in the ancient sport of... volleyball! Utilizing a few special moves and a lot of smartly-timed jumps, you'll face off against AI foes or local human players as you spike and serve your way to the top. To the winner goes the spoils, and to the loser goes a hot blast of sunlight! 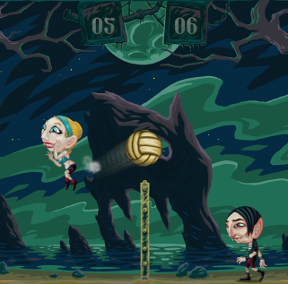 Vampire Volleyball sets opponents up on either side of the screen with the net in the center and a dirty little volleyball bouncing between them. Choose between easy and expert controls, the latter putting left and right directional buttons on the screen for manual walking. Both modes ask you to do the jumping, and how/when you do so determines where the ball gets shoved, sort of like a primitive game of Breakout. Special moves are initiated with a quick double tap, unleashing head spikes, double jumps and drop kicks to get some action on the court.

The standard move of play in Vampire Volleyball sends you through the ranks of progressively more difficult opponents. Defeat them one by one and you can choose to play them in later matches. Multiplayer mode lets you and a friend face off against each other on the same device, an experience that's every bit as wild as you'd think. Vampire Volleyball keeps things simple, but the attention to minimalism is what makes it such an attractive game. Be ready for dozens of rounds of volleyball before you even consider taking a break!