On an ordinary morning in a quaint little town, Faraday Ram lost her pet rabbit. Faraday is a sheep person, but her rabbit is just an ordinary pet rabbit, so it's very important that Faraday tracks him down before anything happens... and with the dangerous forest perched intimidatingly on the edge of town, there's no guarantee anything won't. Very Retrouvaille, a free adventure game created by PR1NCE, is the story of a town, and the quirky (animal) people who reside there, and a young lady who loves her pet so much that she'd gladly jump through all the hoops in the world to get him back. 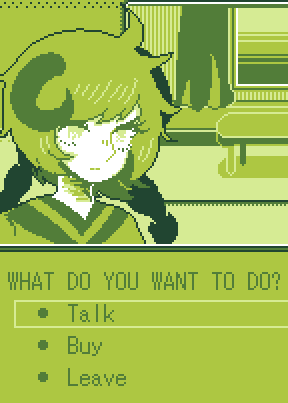 Move Faraday around with the [arrow] keys, using the [spacebar] to examine things and talk to your neighbors. Enter their houses and you'll be able to talk to them a little more directly. You'll be doing a lot of favors for the other characters— one of them might be able to help you get where you need to go, but only if you do her a favor... and the person who helps you accomplish that favor might need a favor of her own. It's possible to finish very quickly without seeing everything, so you may want to take some time away from the main adventure to stop and smell the roses. You might learn something new about the characters, or even the town itself.

Very Retrouville isn't exactly forging new ground. An exploration adventure set in a gentle little town, made with RPGMaker, with a limited palette? Never been done before, no sir. But Very Retrouville does a better job of it, in my opinion, than any game like it before. The art is gorgeous, especially the talksprites that show up inside the characters' houses, and the town looks exactly like a gentle, quirky setting should. Most of these games put everything on one big main map, but I found Very Retrouville's method of organizing the town to be much easier to navigate. Separate screens! With memorable differences! 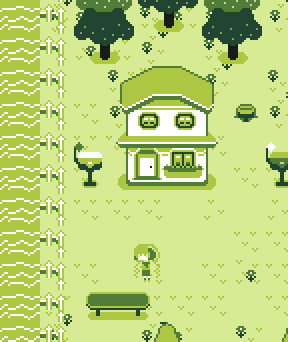 It's easy for me to get lost in these games, but that didn't happen in this one, and frustration was kept to a minimum. The story and characters, however, are where Very Retrouville really shines. Aside from being adorable precious babies, almost everyone Faraday meets seems like they could be the protagonist of their own little tale, if we weren't busy following Faraday. And to say much more about that would be a spoiler, but there are some well-written surprises along the way in Faraday's story, and not all of them are as innocently fluffy as the game's presentation would make you think.

I didn't expect much from Very Retrouvaille before I started playing it— I'd been on a downloading spree, and I only really got to it once I'd played through the rest of the pile— but I became absorbed in it quickly, and once it was over, my only real complaint was that it was too short: I wanted to spend more time with Faraday and friends! Give it a try, and you might be pleasantly surprised too.

Couldn't say it above, since it's a spoiler for this game and others, but I really love how

Very Retrouvaille played with genre conventions so much.

The first thing like this I played was Very Pink Game, and I really wasn't sure whether there would be a happy ending. There was, and the uncertainty made it ultimately happier. After that, I played Melon Journey. I assumed it would probably have a happy ending, though I wasn't 100% sure. It did. When I got to Very Retrouvaille, I wasn't concerned about the rabbit at all. It was just a plot coupon to get Faraday out and on an adventure, of course it would be okay! And then... it wasn't.

It's not that I feel Very Retrouville was a copycat game— the dev clearly had a lot of her own ideas. But I don't think I would have been so surprised if I didn't have that previous experience with similar games, and I wonder if that was intentional.

I'm curious about how people who played Very Retrouvaille without playing any similar games reacted? Do you think the twist stands on its own?

I don't feel like the twist is all that revolutionary, or really enough to make the game noteworthy. It's got a fantastic soundtrack and great art, but the gameplay is limiting in how linear it is --- you can't do things out of order even when one event wouldn't effect the other. And the "puzzles" as they are manage to be both frustratingly simplistic and illogical.