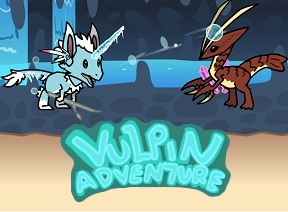 A wild RPG appears! Vulpin, I choose yo- oh woops, wrong game. You'll understand the mix-up once you've played the adorable turn-based role playing game by Firequill, Vulpin Adventure. Customize, train, and gear up your own fox-like creature to reclaim the fragments of the precious Star Stone and drive out the enemy monster invasion. No rare candies necessary!

After you've dolled up and named your colorful little buddy, maybe spent some time petting him in the starting area to increase his mood, you do the only thing that can be done with cuddly, cartoon animal creatures... make them fight for their lives! Hover your mouse around the edges of the screen to navigate your Vulpin as you side-scroll through lush forests, icy caverns, and barren deserts. Click on areas of interest to search for loot or to travel to the next zone. Swap spells in the abilities tab before battle to strategize element-based attacks to their full tactical advantage. Winning fights means finding more powerful items or spells and collecting AP to increase your Vulpin's health, strength, defense, and speed. Be sure to keep an eye on your pet's happiness; an unhappy Vulpin means a weaker Vulpin. 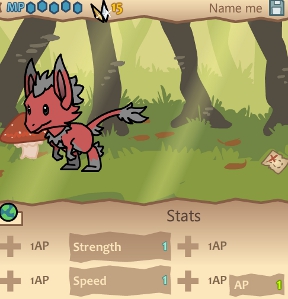 What Vulpin Adventure may lack in depth is more than made up for in charm and a fair bit of nostalgia. You're bound to notice the nods made to beloved games of yore, and it's impressive how well this game manages to incorporate those features. Although most of the zones are actually quite short and decidedly on the easy side, it may take you a while to go through them because Vulpins are apparently slower than pangea. Have a bit of patience, however, and you're sure to quickly find a lot to love.

And if the music isn't familiar enough, it's from Pseudolonewolf, creator of MARDEK! Which is pretty cool, Ithinks.

you forgot the blue flame
[Thank you for your suggestion, the walkthrough has been edited to include that addition -Trinn]

You're also missing the Spiny Earring. It boosts Att +2 and the Seahorses drop it. Very detailed guide though!

Fun game and very cute graphics. A little too easy, though, and could definitely stand to be a bit longer.
[Thank you for finding another addition to the guide. I do my best to include everything I can find, but contributions from the community make all the difference :) -Trinn]

I can't get to the other areas besides the earth one!

After you've defeated the boss Calyx click the sign on the right to travel to the last screen of the Woods zone. On the ground is the map to the next area, but you'll need a space in your inventory to pick it up. Drag it onto your Vulpin to add the new area Desert Ruins to your Explore map

The Ability "Heal" can also be dropped by the Inpus (the black dogs in the desert areas). My Vulpin happened to find one right before the boss battle. Very helpful!

I'm surprised that no one has yet mentioned how overpowered the defense stat can be.
Really, if you just work on putting points into DEF, you won't have to worry about losing the game at all, because enemies (even the final boss) will do 0 damage to you, unless they critical hit for up to 3 damage.

That being said, I did enjoy the game very much, even though a few features of the game seemed just plain missing. I wish I had Trinn's game guide back when I was playing this game! I would have played it even more, hunting after certain items, the extra paints, and all the achievements.

Hi, my owner have gotten me some really cool equipment, everything from Darklight castle. I'm looking really cool, and it's all thanks to you Trinn ^w^ -Lunar

what about the maps that enemies drop? i found a map that went to a place called "edge of the desert" where i found a new color to make my vulpin

You can find a complete list of those maps and colors under "Full Palette" in the Achievements section of the walkthrough.

@Skabby - keep on trying!! Eventually one of the Darkdragons will drop the Lunar Rain book. It took me ages as well and you have to fight a lot of them, and that was my last ability too - now completed the entire game!

I recommend going pure tank just max out defense and health a little evenly until they're both 10 and then go pure defense then max your attack. buy heal ASAP.

I wish there was more space in the inventory or an inventory upgrade, it's annoying to constantly be going back to the storage to store the many items I get from battles. :P

Is my game screwed up or is there just the one screen in the "Darkwood" section??? All I have when I go there is an arrow sign back (left) that takes me back to the home area. I tried refreshing the page but no dice.

Darkwood is one of four secret locations where you can find new paint colors for your Vulpin after using the maps dropped by the rare Brushbeasts. Once you've picked up the paint, the area is complete and you can return to the home world. In other words, it's just one screen and no bug :)

A happy vulpin is a deadly vulpin.

Do I have to do something to get the water boss to appear? I go to the boss screen and its not there, i can walk straight into the place where the map will be but its also missing. I've tried refreshing the page but it's missing.

I saved my game after I played it once, but it showed up later as an empty file ): Sigh...

My Vulpin is really sad,his face is purple what do i do? Please help me :)

Please refer to the Happiness Meter section of the Strategy Guide above the comments for everything you need to know about your Vulpin's happiness.

actually i think they are inpus
you know what i mean right?

is there an achievement for collecting all items ?

Gracie, to unequip you can either swap it out for another item that goes in the same place (eye, tail, etc.) To have NO item in that spot, you have to go Home and open the storage menu, then drag the item into storage.