The Wages of Darkness

What happened, Marina? Where is everyone? Is this the facility's drainage tunnel you're in? Why won't the lights come on? If it's a primary power failure, they're going to enact Protocol 13. If you don't make it to the shelter before that happens... well, it's best not to think about that. Or those sounds of wet slithering you hear emanating down the pipe... The Wages of Darkness is a horror adventure game developed by Baron for April's Month of AGS Competition. It was given the top prize (presumably because the judges were too scared not to), and has since been streamlined and polished into this wider release. 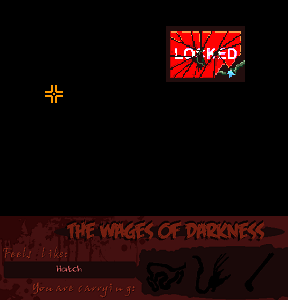 The theme of the competition was "Distorted Senses", and The Wages of Darkness certainly has those. Controls will be familiar to most adventure gamers, but since much of the game takes place in utter darkness, you will rely heavily on the dynamic label that shows you what each surface feels like as you mouse over it. Right-click with the mouse to examine items, and left click to interact with them or add them to your inventory. Once there, they can be clicked to be used on something in the main game window, or combined with other inventory items. Right clicking will deselect an item. Players should appreciate that Wages of Darkness has several difficulty modes: Easy (where it is impossible to die), Difficult (where taking too long at critical points will lead to your death), and Intense (where the time limits are even more stringent, if you're in to that kind of thing).

Tactile sense is difficult to convey in a video game setting, but The Wages of Darkness makes a decent stab at it, and it makes for some surprisingly effective horror. The atmosphere builds as you grope around in the darkness, looking for something, anything that will help you fend off those gurgling creatures you hear clawing their way after you. Horror is often at its best when the monstrosities are left unseen. Of course, the sort of blind object-finding the game relies on probably couldn't sustain a much longer game: even if the frustrating dread of being unable to find an object as the wet gnashing of teeth get ever closer is one of the most nerve-wracking kinds of Adventure Game situation, we can probably all agree that pixel-hunting gets old fast. However, Wages of Darkness takes only about ten minutes, which is just the right length for this stomach-punch of horror (even if it's ending is undercut by some questionable voice-acting). If its goal was to make players uneasy about turning the lights off, well then, mission accomplished.

Meh...Game seems a bit too predictable all the way up the end.

I loved this game! It was scary, atmospheric and I thought totally unpredictable! It is very short but well worth a play! :D

The requested URL /games/wages/wages_of_darkness.zip was not found on this server.

Additionally, a 404 Not Found error was encountered while trying to use an ErrorDocument to handle the request.

I must unfortunately agree with MsInterpret--I predicted some of the twists, and it came off as a bit too cliched, which wore badly on the horror of the game. Since the story was also a bit bland, I couldn't really emphasize.
Worth a play perhaps, but not the most original premise or conclusion.

At about the 3rd-to-last area, I figured out the ending already. Although predicting the end did nothing to lessen the dread of it actually happening.
The game is well done, although REALLY short. However, the pixel-hunting in the dark would get old fast if the game were much longer. Especially if you manage to guess the ending early.