Wake Up The Box 2:
Office Edition 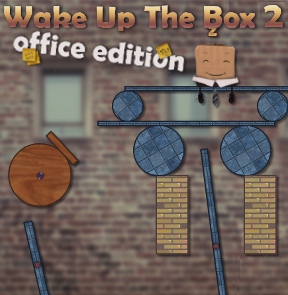 What? Still sleeping? C'mon, it's time to work. I don't care if you're just a box. You're wearing a tie, for crying out loud. Those TPS reports aren't going to file themselves, you know. Hey! Are you listening to me? (Shove)

That's better... now pay attention. Wake Up The Box 2: Office Edition is Eugene Karataev's follow up to his original Wake Up The Box physics puzzle, which spawned two royal cousins (Wake the Royalty and its Level Pack). This offering has 30 levels of contraption-manipulating goodness, the most of his releases so far. Instead of taking place in a sedate puppet theater-type landscape, this time the corporate Mr. Box exists in an urban-like setting, with brick walls, graffiti and windows.

The gameplay is the same as before — attach a set of non-rotatable wooden objects to other wooden objects and let physics work to knock or jostle Mr. Box awake. This iteration introduces three new elements: stone-like objects that are "aggressive" to wood (wooden objects disappear when they touch it), "staples" (links of paperclips that flex and swing), and trampolines (objects that act as bouncy surfaces). These additions add a deeper level of gameplay to the levels and allow for some amusing results.

Play all the "Wake Up!" games:

Wake Up The Box 2 is a solid, casual game that fans of the series and physics-aficionados should enjoy. The title feels more refined and smoother than its predecessor, adorning the interface with office notes and doodles, while showing thumbnails of each level's layout on the level select screen. My only real issues are in the game's exact pixel-placement nature on some of the later levels, and the game's unclear scoring mechanism. Otherwise, the levels are fun, with some clever and amusing Mousetrap-like contraptions you get to trigger. So on your next coffee break, do your duty to keep the corporate world honest and once again Wake Up That Box!

Wake Up the Box 2 Complete Walkthrough

Unlike other physics puzzles, the Wake Up The Box series involves combining various pieces of static shapes to other shapes in order to add mass and momentum to them. Remember that you're essentially adding weight to certain objects to make them move in certain ways.

i am really stumped on level 21. i can't access youtube so can't see the walkthrough. anyone want to give me some hints?

Wake Up the Box 2 Complete Walkthrough

Unlike other physics puzzles, the Wake Up The Box series involves combining various pieces of static shapes to other shapes in order to add mass and momentum to them. Remember that you're essentially adding weight to certain objects to make them move in certain ways.

My friend and I were playing this a few days ago and got stuck on level 21, thanx J-Witz! =D

I don't like this version. I didn't know where to even start with some of the puzzles and had to look at the walkthrough.

And by the way, I hate when the level that you're on isn't indicated anywhere on the game's screen and you have to go back out to the main menu to figure out where you are.

So I did the whole hook-setup on the right with mr. box, but I guess i put the last peice wrong, and it threw the hook up into the top and all i had left was the base of the dragging piece. so, the arm attached to the spinning wheel kept hitting the block and knocking into mr. box, slowly waking him up. It was slow, but it worked.

I like this series of games, but this one wasn't very challenging at all.

huge fan of wake the box one. this one is disappointing. the music had some abrupt changes so lost its effect. the puzzles weren't interesting. also i prefer designs where there can be more than one way to solve something. i like finding a solution that later (when i look) isn't in the walkthrough. these forced mostly single solutions with little flare. the purple which erased wood was annoying and not in a challenging, good way. just not fun. might a suggest the next game, set the box on fire? this one just didn't feel mousetrappy. missed the mark. also the difficulty was either nonexistent or too high. no decent ramp up in difficulty. blechhh. still i won it but feel no sense of accomplishment (in casual game sense.). much preferred red box eliminator.

This game is not too bad, but the levels are either too easy or too hard. Some levels rely too much on timing, making the annoyance factor rather high.

Anyway, for level 30, there is an easier solution, with minimal timing needed.

i just cant get past level 14 i've tried everything!!!

I got the last level first shot ;D

The last level has an easier solution using only two pieces and without any timing problems:

Put the first horizontal piece in the rightmost small wooden ball, sticking out to the left. Place it so the rightmost edge of the piece is exactly in the center of the ball.

You should end up with the plank that starts on the board on the lower platform leaning left (but not touching the middle platform).

Then put the next plank on the left-hand side of the plank on the board, and it should spin around and poke Mr. Box from the left.

you can actually do the last level in 1 block
Spoiler

In Wake the Royalty, I do not understand what is needed for level 14. A vertical bar, a horizontal bar and another vertical bar, one royalty moving across to the right, another royalty sleeping on a swing. So far, in 3 weeks of sporadic play, nothing I do wakes more than a small eyelid? I suspect that my system is inadequate but maybe not.

[Please do not post questions about Wake the Royalty on our Wake Up The Box 2 review. Please use this page to post your question: https://jayisgames.com/archives/2010/02/wake_the_royalty.php ...this comment will be scheduled for deletion soon. -Jay]

Level 22 is a living hell, pain in the horse, cigarette butt. How do you even do it? The walkthrough for it dosn't make sense! Horse crap.