That's right, it's a licensed game based on a 30 year old movie! In Be-Rad Entertainment's WarGames: WOPR, the War Operation Plan Response computer is hacked by David Lightman who proceeds to engage in games against the artificial intelligence. Things get a bit out of hand, though, and the struggle nearly sets off World War III. In the movie it's all about man versus machine, and you know exactly who wins. In the game, you play as the computer fighting against those do-gooding humans as you attempt to fill the world with freshly launched nuclear missiles. And what better way to play out that attack than in an RPG-inspired puzzle game? 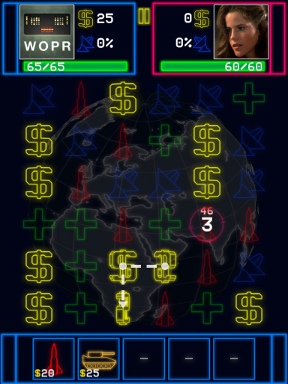 Each round of WarGames pits you against an opponent as you attempt to outwit him/her by being a tile-matching virtuoso. By dragging over the pieces on the screen, you can construct snaking lines of three or more of the same type. Depending on which tile you matched, different things will happen. You'll want to attack your opponent by matching nuke tiles, of course, but you also need to keep your health high by matching health icons. Satellite pieces add up to a special ability you can unleash, while cash tiles increase your booty (not that booty) that allows you to use special abilities.

Did we mention you're being attacked during all of this puzzle matching madness? Your opponent will target certain tiles, each one marked with a turn counter and a damage number. Once the turn counter reaches zero, that move is initiated, and if the piece happens to be a nuke, you could be in for some serious damage. By matching these target tiles with large chains of pieces, you can whittle down their power and get rid of them before they activate. It's not always an easy thing to do, but it really adds to the urgent, tense feeling that pervades this sometimes frantic puzzle game.

Unlocking, equipping, and using special techs is one of the best parts of WarGames: WOPR, and you get to manage two separate inventories full of bonuses. The Tactics equippables stash themselves in a small bar at the bottom of the screen and can be used during the round by spending a little cash. They often directly damage the enemy or rearrange bits of the board. Mods, on the other hand, are passive abilities that give you bonuses for making matches or increase certain stats. All equippables can be upgraded using RAM, and RAM is earned by winning matches or by dipping into your wallet and indulging in the game's totally optional in-app purchasing system. 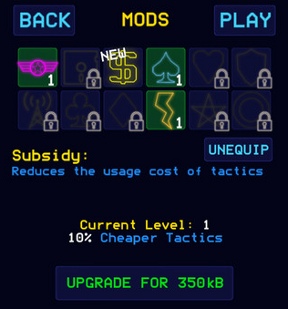 Analysis: Puzzle hybrids are all the rage now, owing a lot of their popularity to the Puzzle Quest phenomenon several years ago. More recently, games like 10000000 have graced the mobile market, showing us that matching-based puzzle games are far from dead, especially if you add a bit of long-term progression to the mix. WarGames: WOPR does exactly that, and the release gets the formula absolutely right. Gameplay is smooth and intuitive, challenging but ultimately solvable. You get instant gratification annihilating those pesky humans in one-on-one play, but as you unlock new techs and mods, you get to increase your powers to do some really crafty things. It's epic, world-ending fun. Literally.

The more levels you complete (there are 41 in all), the more pieces of the launch code you'll collect. Bonus stages come by from time to time, mixing things up by changing the level goal to something slightly different. The "poker" round, for example, challenges you to move certain pieces to the bottom of the screen before time runs out. And then there's the super nuclear missile that will deal 9999 damage to you as soon as the turn counter runs out. Good luck defusing that goliath of a bomb.

The goal of WarGames: WOPR is to destroy mankind, which doesn't exactly put you in the role of hero (depending on how you view humanity). You never get the sense you're the big bad evil one, though, so the tone stays fairly benign. Besides, it's just a game, right? It's not like this game is meant to teach some far away computer how to defeat us at puzzle games so it can eventually rule the world. *nervous laughter*