We Know the Devil

Neptune, Venus, and Jupiter are just your average teens, sweating and groaning through another year of being with the Summer Scouts. Between the bullies and the frustrating camp activities, which of course include your typical teenager chores like fighting evil and getting ready for Magical Girl style transformations, the group is just waiting for it all to be over so they can get back home and back to normal, or at least as normal as they're expected to be. But in between all the religious songs and charm practice, all the sunscreen and bugspray, Jupiter, Venus, and Neptune keep their own secrets, even from themselves, even from each other. Because if they were ever to be found out, well, they'd be left all alone when the devil comes for them. Aevee Bee, Mia Schawrtz, Alex Lambert and their team bring you We Know the Devil, a surreal psychological indie online visual novel about being "weird and queer and wrong and hoping no one finds out when the actual, literal devil comes for you". To play, just click to advance the text, and, when offered, choose character combinations to undergo certain tasks. The game has four different endings, with the "true" one only available under certain conditions once you've got all the others, and you'll want to chase down every interaction and character combination to flesh out not only the relationships, but the kids themselves and how they relate to and see themselves and one another. 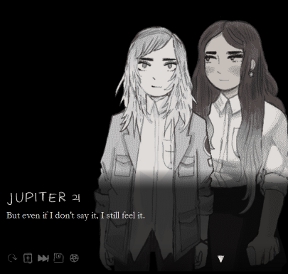 Writing teenagers can be hard without being inauthentic one way or another, and while We Know the Devil often falls into sounding more like a chatroom transcript than anything else, the cast feels real and genuine. You've known kids like this, or been them yourself even if it was a long time ago. The themes of struggling with identity and what you want when everyone else around you is pushing back and telling you it's wrong, to the point where you're keeping it all inside and hating yourself for it, are relatable no matter what your gender or sexual identity. The setting is both like and unlike our own world, which only serves to drive home how hard it can be when you're growing up with the terrifying suspicion that you're not like everyone else, or what everyone else considers "good" or "right". The classic "Magical Girl" trope is strained through modern religion, with the literal Devil in place of The Dark Kingdom's minions, and more personal, painful struggles manifested as what society views as monsters to be guarded against and stamped out. The old-school, discordant horror movie soundtrack serves to create an atmosphere of dread, and while it would have been nice to have some scenes depicted as something other than the characters standing around with their arms at their sides no matter what the action is, they look and feel realistic and expressive.

To dismiss We Know the Devil because it occasionally feels a little too glib or twee is to dismiss the very real feelings of fear and isolation the game taps into. Who hasn't ever covered up how they felt with humour or sarcasm, or buried their emotions out of fear that that they're wrong? People who have gone through, to a certain extent, what Jupiter, Neptune, and Venus have, may of course find it hits closer to home. The narrative more alludes to the fantastical elements of the story than anything else, slipping in bits and pieces of the supernatural and leaving you to form the world in your own mind. Instead, the focus is simply on the relationships between the kids, and the kids themselves. They joke, they occasionally touch a nerve with one another, they tease and they bicker. Most of all, they deal with things in very different ways. Jupiter is considered the most reliable and trustworthy of everyone, but she struggles to really take the lead and stand up when it counts, while Neptune's brashy "mean girl" behaviour speaks of a deeper frustration and resentment with the expectation to follow along and just put up with the things they're "supposed" to do and feel. The end result is a very character driven story that, despite dialogue that can be a little erratic, weaves together classic pop culture tropes with real life for something that feels very raw and honest. Some may find it cathartic, while others may find it upsetting, but We Know the Devil is a visual novel pulled from a place of genuine feeling like few others.

These types of games aren't my favorite. My problem being most of them read like fan-fiction, and considering the subject... ehhhh... I think I'll skip this one.

Although I'm sure the audience it was intended for will flock to it. (Mostly teenage girls\"nerd" girls)

@RamblinRob
Sounds like somebody hasn't read much fan-fiction. I think we could have guessed your opinions on this game given you put the word "nerd" in "nerd girls" in quotes...