Wednesday is stupid. Why do we even have it? Sure it gave us a briefly-funny-then-quicky-obnoxious CGI camel, but by virtue of being smack in the middle of the week, it also somehow feels ten times longer than any other day, and there isn't even anything good on TV. Even the networks shun it, and they'll throw money at anything. So to make your Wednesday go a little faster, why not chip away at that mountain of "no weekend yet for you, sucker" with some free online escape games? With a little cheeky Minoto strangeness, some possibly (?!) very threatening Neat Escape, and some of no1game's little green men for good measure, your Wednesday just became bearable. 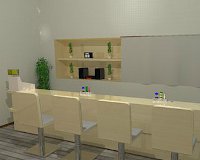 Escape from the Coffee Shop 4 - There are a lot of reasons you might want to get out of a coffee shop. Maybe the barista is giving you smug stinkeye for your double light mocha soy caramel frappulatte (it's my liiiiiiife!). Maybe the wifi signal is really bad and you need to stream the rest of Attack on Titan before someone else spoils more of it for you, Gavin. Maybe they serve "Seattle's Best Coffee". In this case, Neat Escape wants you to find your way out because, and I quote, "You are good to eat and I like." This is why zombies can't be small business owners, people. 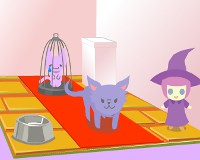 Magic and Cat Escape - Hold on to your hats, folks, because when Minoto is in charge, you know Captain Logic is not steering our tugboat. There's a chain that dispenses raw meat. A wall of flames. Semi-phenomenal, nearly-cosmic powers. A flightless bird with glasses. Basically, everything you need to recreate those really bizarre dreams you had when you stayed up too late watching foreign cartoons with no subtitles when you were six. (Ovid? Moomin? Anyone?) Blink and you'll miss it, but ain't it cute as the dickens? 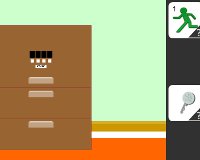 Find the Escape-Men 95: The Room With No Door - The premise sounds like the sort of thing you'd call Moffat's Sherlock around to solve, except we all know he'd just sneer so hard at it his upper lip would come off and go flying around the room giving you sass, so we're on our own in no1game's latest. There are ten little green dudes hidden around the room as usual, but in a departure from the norm, as the title implies there seems to be no door. There are, however, three different endings, which is a nice touch, so get to clickin', chicken.

We love escape games, and our readers love talking about them and sharing hints! How about you? Let us know what you think, ask for hints or help out the other players with your walkthroughs in the comments below.

Find the Escape-Men was pretty good. Not too overly difficult to do, and pretty easy to find all 3 endings.

Magic and Cat escape wasn't too bad either. Took me a bit to

actually look at the items

Did anyone else notice in Find Escape Man 95 that the

wires were blue and yellow, which equal green?

I'm stuck at only 2 endings,

Dora, did you perhaps intend to post Escape From The Coffee Shop 3 and you accidentally posted number 4 instead? Number 3 is an OK game, if a bit formulaic. Number 4 is... lame.

To illustrate, here's a walkthrough, written entirely from memory.

(The observant will note the utter lack of anything to do with the red & blue code. That's because said code will get you the remote control to the radio, and turning on the radio will get you a big fat nothing.)

By my count, this game has 7 or 8 red herrings vs. 7 actual clues/locations. A good game generally does not have any red herrings — i.e. every clickable spot has something to do with the solution. Of course, in this game, that would mean there would only be 7 clickable spots, total, which illustrates the other big problem with it: an almost total lack of content. Short is one thing, but two codes and one item to find? Yeah. :/

If you are missing an ending

When you pour the green liquid a column rises from the floor. Can you do anything?

Can you step on it?

I can't speak for Dora, but the point of the WE games is they are each a bit of a quick jaunt. That's why we put them with two others...to round it out. But it's understandable that not everybody will like every game we choose to include. Just as, with very rare exceptions, I'm not a big fan of horror games even though they're hugely popular with the JIG community and staff alike. Also, I love red herrings in any escape or adventure game because they're like a bit of a tease or joke; Tesshi-e, Mygames888 and several excellent game designers tend to use red herrings, as well. Again, though, completely understandable if you or other players don't like them. Hopefully you'll enjoy our next set of escapes better. :)

No idea why, but Find the Escape-Men doesn't work in my browser. I really wanted to play it, too.

Does Magic and Cat escape have another ending?

any hints will be welcomed.

Right after you find all 10 green men, they will turn into green powder

I do not know which green man you are missing. Have found the one you get by putting the battery in the bottom drawer of the set with the key code to see what that would do?

Have you looked at the key in the second drawer?

Have you opened the window and just waited?

thanks for the help

I have never been very good at waiting....

Magic and Cat Escape's not too hard, but here's a walkthrough for anyone fed up with the non-logic aspect.
Exploration

What's bizarre about the Moomins?! :D

Everything when Moomins was only available in French for me and I didn't speak it when I was six. ;)