You guys. You guys. We're only four months away from Christmas, which means that whether you celebrate it or not, you have, oh, about two weeks before all the stores start playing the music nonstop. Time flies! It's a crushing realization. So why not ignore the passing of your own mortality and play some free escape games with Weekday Escape? This week! Vitamin Hana has heard you've been getting out of their escapes easy, so they're taking drastic measures. Self Defiant presents a terrifying dystopian future where naps are apparently illegal, which is way scarier than some chick with a bow. And Esklavos wants you to just, like, chillllll, man, with the birds and the bees for a while.

BLAST! The Wall - So Vitamin Hana is getting pretty ruthless. No more cutesy escapes for you, my friend. Now it's just four cold, cement walls in the middle of nowhere. But, like the song says, "can't fence me in", and after you crack a puzzle or three, I'm sure you'll be able to find a way out. And if not, well... there are worse places to be trapped in. 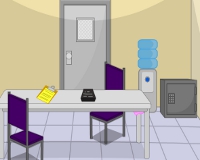 Escape Plan: Police Station - Self Defiant has locked you up and thrown away the key for the crime of flagrant napping, or at least that's what I'm assuming happens once the game informs you that you wake up to find yourself trapped in a police station. Hunt for clues and items you need to solve puzzles to escape, but hey... I've done hard time for a nap or twenty. And I'll do it again, see?! 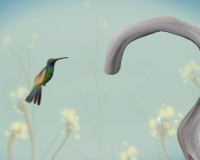 The Microcosm Escape - Esklavos tends to make some pretty eye-catching escape games as it is, and though this one is on the easier side, it's definitely one of the prettier, too. All you have to do to escape this teeny-tiny world is track down a bunch of insects with a hummingbird as your guide... or maybe you ARE the hummingbird? I don't know, to be honest, but gosh it's pretty.

Love the music in Microcosm Escape! Short and sweet.

for Blast the wall, if anyone else is stuck at the start without solving a puzzle, (like i was for about 10 minutes), just be sure that ...

you leave no stone unturned.

can't believe i missed that!

Just my opinion. I didn't find the Microcosm escape easy. I thought it was a bit confusing! Also, I didn't find a clue to the ladybug and the five rocks puzzle. Although I found a solution, I don't know how it was arrived at.

I found the triangle puzzle in Blast to be really annoying.

For starters, there were three different views that could have been clues for it:

The one box zoomed out, the same box zoomed in (which magically changes the locations of the colors), and the kite.

Then to make matters worse

The actual location of the triangles is in a box with numerals at 90 degrees, implying that the triangles should be read in the same orientation. This turned out to not be case, so it made no sense that the numerals would be at a different orientation than the clue inside.

All that combined meant I tried and retried 6 different combinations before I got it right.

Blast the Wall looked delightful, but Flash actually crashed while I was playing it! That has essentially never happened before; don't know if it's a bug in the game or just coincidence.

look at the marks on the tree in the opening scene.

Thanks. I did see those marks but I didn't use them. You are right about the clue, but

it took a few tries to see which rock was number one.

the blades of grass next to the rocks indicate their number! The rock with one blade of grass is 1, the one with two blades is 2, etc.