Once again we've scoured the internet from top to bottom (you wouldn't believe the things we've seen...) to find the best casual games you can "download" onto your "computing machine" and play with an input device such as a "lettered slab with keys" and/or a "mouse". If technology continues to progress at this blazing speed, before long we'll utilize motion-sensitive devices to allow us to "control" our games "remotely"! Wii! That'd be fun!

What Makes You Tick
(Windows & Mac, freeware, 30MB) - An adventure game created by Matthias Kempke using Lassie Adventure Studio. It's similar in style to the online game Something Amiss, but with a more complete story and a superb 1800s atmosphere.

Loonyland 2: Winter Woods
(Windows, 8.6MB) - An action-RPG from the creator of Dumb: The Game and Dr. Lunatic Supreme With Cheese. Loonyland 2 is a big RPG with tons of quests, items, achievements and character abilities to unlock/upgrade. It's surprising how deep of an experience it is, yet you never feel overwhelmed. Plus, it's funny. In a funny sort of way.

Acidbomb 2: Rearmed
(Windows, freeware, 25MB) - Featured on a previous Weekend Download, Acidbomb 2 is out and fully armed. Use visual clues from navigating the bomb's grid to determine which tiles are dangerous. Mark them, watch the timer tick down, and hope you didn't miss one. A brainy cross between Minesweeper and picross that definitely shouldn't be missed. A full commercial version of the game was recently announced, so grab this always-free version and get pumped up for more. 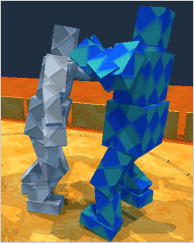 Sumotori Dreams
(Windows, freeware, <1MB) - Weighing in at an unbelievably small 96k, this quirky game pits two sumo wrestlers against each other in a clash of titans. The controls are a bit awkward and there isn't much to the game, but a little shoving goes a surpisingly long way in this fun diversion.

"When ragdolls get brains hilarity is sure to ensue." -L0ser

"It'll make you giggle until you vomit :D" -Bryan

Sumotori is too fun!! What does it mean about the hidden part of the game? I love watching them stumble around trying to bow to eachother, especially when they break the boards surrounding the arena. Those are clumsy wrestlers :P

Loonyland is cute and fun .. Money is a little hard to acquire but other than that I think i'll play as much of the demo i can .. possibly buy it .. its already somewhat addicting

I dled Loonyland, and its cute game and all, but i have a problem with the screen size...not matter what my screen resolution is, the game is still too huge, and sometimes the words get cut off and i can't see my status bars. Anyone kno how to fix this?

"What Makes You Tick" was great! It was a fairly simple puzzle, but the atmosphere, art, and humor more than made up for it.

Wow! Acid Bomb 2 is one of the greatest puzzle games I've EVER played! I love the strategy, but sometimes I find it impossible if I'm not given any '0's to start with. I'll have to keep trying to find more strategies :D

Has anyone else apart from me found the hidden part in Sumotori dreams? If you havent then heres a hint, if you want one.

I really like hitting the blocks in the background in the main menu! I especially like trying to hit ones right at the edges!

In the main menu, throw a block through the furthest gap on the right (In between 2 of the poles). Throw it about a centimetre from the block at the front.

I loved What Makes You Tick! But about the ending...

is there going to be a sequence? The ending suggested that...

In Acidbomb 2, anyone else notice the pattern for level "1-6: City of Boston"??

Need help for "What makes you tick?"

Am I the only one who recieved errors in both Firefox and IE (latest versions of both) when trying to download What Makes You Tick? Nothing would pop up- IE returned an error, and Firefox just sat there. Managed to find the direct download link via the page source finally.

ProfPuppet, ...hmm I had no trouble with the download. But maybe my Firefox version ironically isn't updated.

Have you found a way to open that iron gate with a raven on it?

How do we open bottles when there's no corkscrew again?

For wetting the cloth:

Just water is not going to clean the plate. You'll need something stronger.

For the house mat:

Sumotori doesn't work for me. Can someone help?

i'm having the same problems as litt1egh0st.

I'm stuck in the same place as litt1e, hints please?

Ooooo there are lots of hints on the game's page, they're not very subtle though

What Makes You Tick:

To find the string:

I could use some help myself...

I'm trying to get something that will float to finish the fishing pole. I'm thinking I need to open the bottle so I can use the cork, but I can't seem to get it uncorked. Lil' help?

Thanks Zemocasu, I didn't notice the hints link on the game's main page. That helped, although I could do with a bit more subtlety too. :)

i'm afraid those hints are so vague and innocuous they didn't even really need spoiler tags :\

Help for Little and others, subtle hint then major hint:

How would a rough and tumble sailor open it? Note that the sailor character plays no part in opening it, it's just hard to give a subtle hint in this case.

Well, if salt water and fresh water aren't useful, maybe you need something else.

It's medicinal, I swear!

Does not become active until you've talked to a new person.

Once the elderly gent appears on the screen where Nora was sitting, after you talk to him you can use the doormat.

Eeep, the above hints were from me. Registering now so I don't run into this again.

Ok, I'm amazed by sumotori dreams. If I'm not mistaken, it looks like this guy has realistic fracturing of the barriers. In other words - the blocks will break uniquely each time depending upon how they are hit.

Why the heck isn't this guy making commercial games?

I got to N4 now, but its getting more and more annoying, and somehow less puzzeling :-(

One more thing: acidbomb 2.
Did anyone else notice that they used music from Metroid Prime for the title screen? At least, that's where I assume it's *originally* from.

Wow... I really love What makes you tick. But there's a flaw, so I struggled for a long time with the game, before I had to read the solution.

If you pour the alcohol into the shaker AFTER you've made the posionous food for the crow, you won't be able to wet the cloth - and you will have to start all over!

Anyone else try What Makes You Tick? on a Mac? It downloaded fine, and there are loads of folders but there's nothing that System 10.3.9 recognizes as an application. It's supposed to be a standalone app.

Hi you all out there,

In "what makes you tick" im having problems in opening the bottle, i am not able to uncork it, i cannot use it on myself.

there had better be a sequel to what makes you tick.

i hope there is a sequel to "what makes you tick?"
the ending was a bit frustrating.

btw. the end was really frustrating

Greez,
Shura and the whole bunch

"What Makes You Tick?" is great! Anyone know if there is a sequel coming?

How do you get the glove that the hermit crab lives in?

I got the second glove:

After you've spoken to the sailor and checked out a few things at the wharf, go back to the first screen, where you'll meet Greg, the designer of the game (ooh you are so postmodern, Greg). Chat to him and he'll give you a can of Dr. Pepper. Open and drink it, so you have an empty can. You can then give the can to the crab and take the glove.

Aaaaaaaand using the power of the JiG post to make me stumble upon the info myself, how does one obtain bait for the fishing rod in WMYT?

Acidbomb 2 doesn't launch for me. I download and unzip just fine, but when I run it, nothing happens. Task Manager says that the program is taking up one of my CPUs, but nothing ever shows up.