Step one: Push the box, solve the puzzle. Step two: Go into space, push the box, get your stuff. Step three: Build a machine, buy some weapons, pick up some money. STEP FOUR WIN!

Boxycraft (Windows, 23MB, free) - One of the most blindly entertaining physics puzzle/platform games you can download, Boxycraft turns you loose in a playground filled with pushable, knockable, movable objects and gives you the power to latch on to almost anything. Move with the [arrow] keys and click the [left] mouse button to hold on to nearby things. You'll need to master the swing and jump technique to best some of the levels. The physics are a little iffy at times, especially the character's movement and hit detection, and the game is on the short side, but it's a great ride while it lasts. No worries, as developer Robert Dodd is working on Boxycraft 2! 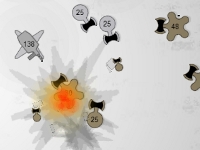 Drone part 1 (Windows, 10MB, free) - A hybrid tower defense shooter game, Drone puts you in the role of a little movable machine with a lot of potential. As you move through each level, you must take out waves of foes in real-time using various weapons purchased through the shop. You can also buy stationary machines that will fend off enemy attacks, collect money for you, or spawn helper dudes that will go forth and do your dirty work. An excellent mixing of genres with just the right level of difficulty, and with hi-def visuals, ten weapons, ten buildings, three sets of armor, and 16 enemy types, you'll get several hours of entertainment at minimum.

A Weekend in Space (Windows, 2.5MB, free) - Some people take weekends at the beach. Here, space = the beach. Although... not really. Stranded on a strange low-gravity planet, this bare-bones exploration game pits you against the environment in a quest to find your stuff. The game was created by Andrew Brophy for Ludum Dare 16, although it missed the submission deadline. A few glitches can be found, but nothing that should ruin your game.

is there a free app i can use to read the boxycraft .rar file?

7-Zip is one of the most popular programs.

Boxycraft is fun, but the jumping mechanic is a bit wobbly. Ah, and it's way too short! There was so much more that could have been done with what was already there, like a level with a huge spiked boulder rolling straight into you Indiana Jones-style, or some sort of timed contraption that blocks the exit if you can't defuse it quick enough. But I'm guessing the author has some tricks up his sleeve for Boxycraft 2, so I'll keep an eye out for when it comes out!

I can't play boxy craft. :C I downloaded Microsoft Downloader/installer or whatever, but I can't download the right frame work. :<

Boxycraft.....no option for asdw keys instead of arrows? If you're gonna make me use the mouse then you gotta give me left handed controls too.

Also, as mentioned earlier, the jump mechanic sucked. Was pretty annoying getting flung off of things for no reason.

But, still a decent little game for the price.