A few games for your weekend perusal, all of which summon that coveted "oh, neat!" moment at least once! Also, it's a miracle I didn't type a D instead of a T at the end of the first game.

Blackfoot (Windows, 5MB, free) - A platform RPG starring all the best woodland creatures! You play as a crafty weasel on the hunt for prey. Run around the woods searching for eggs hidden in nests amongst the branches. Along the way you'll have to attack enemies to defend yourself and probably do a little wall jumping to help yourself climb trees. After killing your prey at the end of the level, use earned ability points to increase your jump, speed, and acceleration.

STREEMERZ (Windows, 8.3MB, free) - Ever play Bionic Commando? STREEMERZ is like that, only it's based on a game released for an unlicensed NES compilation titled Action 52. Oh, and it's way better. Hold [X] to send out a streamer that acts like a grappling hook. Your character can't jump, so use these streamers to latch onto walls and ceilings to pull yourself up. In addition to just being plain awesome in the gameplay department, Streemerz also has an excellent soundtrack and quite a few funny dialogue moments. Created by Mr. Podunkian. 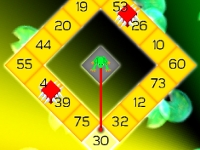 Amphibix (Windows, 35MB, free) - An interesting blend of arcade and puzzle elements, Amphibix puts you in control of a frog out to rescue his kidnapped friend. To pass each level, simply hop from one tile to the next, clearing them by moving from the lowest number to the highest. Moving spike things get in your way, of course, but if you net five correct hops in a row, you'll gain a burst of invincibility and the game shows you which tile to jump on next.

Anyone know where all the eggs are in the firt game? It's excellent, and once you get the hang of it, really fun!!

Wow. The timing couldn't've been better. The Angry Video Game Nerd just recently did a review for the Action 52. It's easy enough to find (I'd post a link, but the rules say no link-dropping).

Let's just say that there wasn't a single title in the whole collection that he liked.

FYI, the Streamerz game is part of a project on TIGSource to recreate all 52 games from the Action 52 with enjoyable gameplay. There's a good chance that in the near future (nearer the end of the month) you'll see recreations of the other Action 52 games available for download.

blackfoot: as a life long wildlife enthusiast, with a particular soft spot for mustelidae, I stoatally couldn't believe my luck! It's weasilly the best game ever.

I wanted to like Blackfoot. I really did. I understand there's an upgrading system, but it felt like I had to play the game in order to earn functional controls. Even then, the collision detection is pretty poor - a lot of the branch platforms didn't seem to be "solid" for their entire lengths, and I found myself falling through, or failing to land on one even though I was jumping high enough.