Certain conventions in video games will never change. Platformers always involve hopping on enemies' heads. Zombies want to eat your brains. Role playing games will always start with the main character being woken up from sleep. And swinging from walls and ceilings is fun. Let's keep it that way for a very long time, shall we?

You Found the Grappling Hook (Windows, 11.9MB, free) - There's just something about swinging around on hooks that makes a game so much fun. It's probably not possible to name a single video game that couldn't be made more awesome with the addition of a grappling hook (except, you know, Grappling Hook, which already has one). You Found the Grappling Hook is well-aware of this phenomenon and thus constructs itself around nothing but grappling. Swing from the ceiling, latch on to the wall, shorten, lengthen, and move back and forth as you hand from the invisible rope. It's grappling hook action, thus it is awesome. 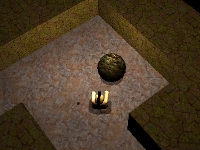 Aztec God (Windows, 6.3MB, free) - Killing zombies in a game is nothing new. Rolling a ball around a maze is nothing new. But killing zombies while rolling a ball around a maze while you play as an Aztec god is a bit new. Use either the mouse or [arrow] keys to rotate the playing field, causing the ball to move towards you with natural gravity. Smash the zombies to open the teleporter that allows you to move on to the next level. Simple, but satisfying!

Visit (Windows, 3.9MB, free) - Before there was Visit 2: The Dark Tower, there was Visit, a simple platform puzzle game starring a cute little alien guy. Although it looks like Knytt on the surface, Visit bears little resemblance to it once you start playing. The central mechanic involves changing your character's color to match blocks scattered around the world, allowing you to interact with them in new ways. When you're red, you can move red blocks, for example. It's a simple idea that's executed very well, worth trying even if you've already mastered the sequel!

Old games. Funny! I've played both Astec God and Visit back when they were entered in the YYG Competition 03, in, what, 2008? Strange how you just got to them. I still think Visit is worth a full review and not just a feature in the weekend DL.

I don't remember Visit 2 (and the download link in that old post isn't working!), but Visit is adorable! Didn't take too long, but it was a pleasant challenge, and worth it just to hear the alien yell "blue! yellow! rrrred!"

How's that guy going to get back out?

Aztec God makes me feel dizzy and a bit nauseous. Well, it's either Aztec God or all the sangria I drank last night.

I have major problems on Visit. I have all the coins but the puzzles that grant you with the red and the green keys are too hard for me :S It would help if I even knew what block goes where