What goes into a Weekend Download feature? The recipe is a secret, but it involves lots of game playing, internet searching, and cinnamon. Especially that last one. 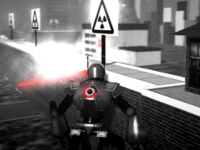 Attack of the 50ft Robot (Windows, 162MB, free) - Ever wanted to play one of those 1950s era robot apocalypse B-movies? Yes, you have. And now you can. Created by a group of DigiPen students, Attack of the 50ft Robot puts you in the metallic shoes of a giant robot armed with lasers, a powerful punch, and the ability to pick up and throw just about anything. Run around the grainy grayscale city and crumble buildings as if they were made of gingerbread, then take on a group of UFOs when they start to get fresh. Two game modes and a 3D option (requires glasses) are included. It's a short game, but you'll be eternally glad you got to experience it. 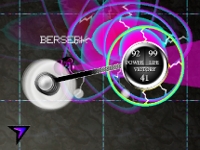 Techno-Drone Alliance (Windows, 22MB, free) - A mouse-based arena shooter with a few tricks up its robo sleeves. You control a battle orb, a small circle who can attack anywhere you click. The orb is tethered to the home base which is the only thing that can take damage and gather power-ups needed to complete each mission. You also have a scanner drone who mulls about checking for enemies. Blast everything that comes on screen, then gather the leftovers to complete the stage, working your way to an epic boss battle at the end. The game's greatest strength is its ability to create a sense of teamwork even though it's a single player game. Your scanner and home base are your buddies!

A Picture is Worth a Thousand Orbs (Windows, 7MB, free) - A tiny, quirky little platform game that's all about a square trying to gather circles. Each time you bump up against a wall, jump towards it and you'll slip through the membrane, tipping the screen 90 degrees and locking you in a different color cell. Also, it's really fun pronouncing the title's acronym like it's its own word.

Apiwato on the last game? lol

Attack of the 50ft Robot isn't working for me. When I try to start a game (in any mode), it does the countdown, but then it's just a black screen with the film reel effects. I've tried waiting for a minute, but nothing happens. Anyone else having this problem?

I'm also having the same problem with "Attack of the 50ft Robot.

Hehehe - in apiwato, if you spin really, really fast, it will spin the screen clockwise then switch into counterclockwise.

APIWATO is awesome. infuriating but awesome.

Can't get Attack of the 50ft Robot to work either.

I can't believe APIWATO actually has one thousand orbs to collect! This game might lure people into thinking it's easy because of its cute acronym, but it's all part of the plan. This game is EVIL.