Wait, so you mean, these games were just sitting there? Waiting for someone to grab them? Nobody was watching, no one at all? What about cameras or electric shock thingies? Nothing? Hmm. So I guess it's ok you downloaded them, isn't it? K whatever, let's play.

Cut It (Mac/Windows, 5MB, free) - From Petri Purho, creator of Crayon Physics Deluxe, comes a short experimental physics puzzle game made over the course of five days. Cut It is not unlike Nitrome's Ice Breaker games. Using a nifty pair of scissors, cut blocks on the screen to guide the yellow square down to the green platform. It's that simple. Hit [spacebar] to reset the level, and use the [n] and [m] keys to skip levels backwards and forwards respectively. 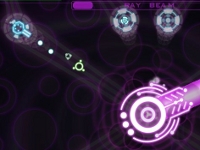 Tower Bombarde (Windows, 17.6MB, free) - A futuristic cyberworld filled with turrets and you, lonely little glowing thing, armed with nothing but—oh, wait, you're not armed, are you? Ok then, no worries. Just trick the enemies into destroying each other and you should be fine! A limited reflect shield is good in a pinch, but otherwise it's all reflexes and planning. Surprisingly deep gameplay introduces combos and ability upgrades in later levels, and the design is extremely well-thought-out from beginning to end.

Rise: Sea of Static (Windows, 4.2MB, free) - Confusing. Annoying. Static. Blocks keep moving. Those triangle things kill me. The other blocks are kinda pretty. Hey, I thought I just stepped on that platform. Oh, so when I move there, the platform moves too. Wait, so I can't go there? Why not? It looks like I can. Where's that noise coming from? I don't like it. I don't like being lost. There's a shiny thing over there. If I can just... there we go. On to the next level. Stage. Place. Where everything is all mixed up.

Rise: Sea of Static is a great concept :) Really liking it but stuck on level 5(?)

Playing Rise feels almost like echolocation. At some points you have to jump, and memorize where the spikes are. Plus it's mostly in caves.

Cut It was fun, but very short. I managed to solve most levels in a single cut, but I don't think it's possible to solve them all like that.

Rise: Sea of Static couldn't have had a better description. It is confusing, it is annoying... and it's surprisingly good. I liked how the entire stage would move along with the player. It's almost like the levels aren't really vertical, but rather set on the surface of a sphere or something. Whatever it is, it's unusual and unsettling, making it a very original experience.

I've played a game similar to Tower Bombarde before, where you had no weapon except for what the enemies provided. In that one, you could absorb bullets for a short time, then release them in a volley all around you. Does anyone remember what the name of that was?