The exclamation mark. It is thought to have originated from the Latin word for joy, lo, and made an appearance in printed English literature in the 1400s. Now, developers can append it to the end of their game titles to denote happiness, excitement or, indeed, to encourage you to exclaim the name outloud.

Warlock Bentspine (Windows, 8.2MB, free) - In the year 2024 AD, the world has kinda gotten pretty nasty. Stinker City is about to be destroyed by the Jihad Gang, and its only hope for salvation is you, Jacob Bentspine, guardian and... Warlock! Similar to games like Metroid and Mega Man, Warlock Bentspine is a sidescrolling adventure/platform game with randomized room order and weapons you can equip after defeating bosses. Work your way through all four stages as you deal with both enemies and environmental traps. A short but very satisfying game with a great style and thoughtful puzzles.

Typomagia! (Windows, 3MB, free) - Ever wanted to turn your typing skills into a weapon? It's time to put your QWERTY (or your , QWERTZ, AZERTY, DVORAK) where your mouth is. (Wait, no, that's gross.) Typomagia is a 2D defense game where you type words to stock up on mana. When the bar reaches the right height, type the appropriate word to summon creatures or cast spells on your troops. Surprisingly fun, and there's a decent amount of strategy involved. Play through the story mode for an interesting journey, or jump right into quick play for a full-on you vs. computer match.

Chawp! (Windows, 2.9MB, free) - An arcade game about precision, not reflexes. Pilot a ship that can change between three colors: red, blue, and green. Click the [left] mouse button to drop anchor and draw a line matching the ship's color. Your goal is to cross over each enemy boss' lines to eventually cut its pieces free. Chawping a line of the same color does double damage, and if you can snip the parent cord the smaller cords will be added to a combo. The description sounds unusual (and the game is unusual), but when you play you'll immediately get the concept and become absorbed in the experience. 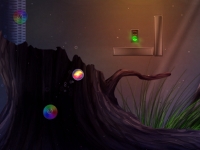 Liquisity 2 (Windows, 20.6MB, free) - From Vertigo Games, creator of The Oil Blue, comes a physics-based puzzle/arcade game that takes place in a nice, roomy aquarium. Use the [arrow] keys to aim the cannon, then tap and hold the [spacebar] to charge up a shot. Fire the bubble away, then navigate it through the currents to reach the red button at the end of the stage. Plenty of trial-and-error when you're trying to get the hang of the game, but once you sink into it, it's all skill. A full, commercial version of the game will be available later this year, so think of this as a teaser release.

I didn't enjoy Warlock Bentspine. I'm not a big fan of games where the theme is running your head into a wall until you break through. I didn't notice any life limit, so apparently you're meant to die a lot.

I found Chawp! to be downright boring.

Really?, the "!" is that magical! (see what I did there.) Again great group of games, thanks JayIsGames! (there it is again! :D).

That Typomagia is an exercise in frustration. I really like the concept, but it didn't run well on my machine (a 2.53ghz Core 2 Duo, so not slow). Most problematic, though, was the fact that when I typed quickly the game would miss characters I'd typed - meaning I'd have to retype the word and making the game much harder than it should have been. That's pretty painful in a typing game. I'm not even that fast a typer.